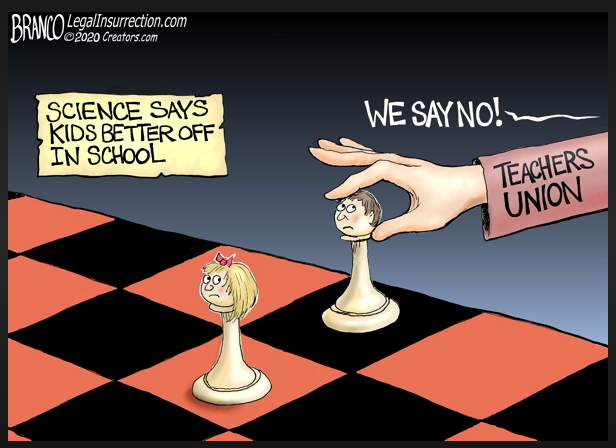 The Covid mess that’s closed America’s schools for the past year may end up radically changing election politics in our bluest states for a generation.

In the end, there are only two reasons schools remain closed and neither of those reasons is the coronavirus. The first are teacher unions, and the second are Democrat politicians who enable union ambitions.

Long before Covid-19 hit our shores, the combination of that wretched alliance had eroded the quality of our schools and imperiled the future well-being of huge numbers of children, especially the children of families stuck in inner cities.

The Wuhan virus has not only shined a light on union malfeasance and avarice, it’s shown the problem is not restricted to certain zip codes. Unionized teachers in large swaths of the country are using the virus as an excuse for not returning to in-person classes. But virtual learning has been a disaster for most students.

Recent reports show kids losing more than 3 months of progress in reading, and 6 months for math. A recent CDC study found 75% of students reported at least one mental symptom due to isolation. 25% had considered suicide. The damage done is pretty much across a wide swath of income groups.

Suburban voters are starting to understand what inner-city families have known for more than three decades. Unions, and most of their members, are more interested in shielding teachers from unpleasantness even if it causes children to suffer. They’re also starting to see that Democrat politicians are fine with that.

As a result, suburbanites are pulling their students from public schools in record numbers.

The Texas Home School Coalition reported a 400% increase in the number of families leaving that state’s public school system last year compared to a year earlier. Withdrawals have ramped up further over the winter.

Realizations by heretofore mostly Democratic voters that teacher unions and Democrat politicians don’t have the best interests of their children in mind are causing Democrat leaders to panic. Predictably, the politicians aren’t hammering teacher unions which are among their most reliable allies and donors. But they are looking for ways to fill the gaps between what unions want and what public school systems can afford.

Most school funding is figured on the number of students in the system.  On average, each student adds about $8,500 to a school’s budget. That means a school district that loses 5,000 students would also lose about $42 million in funding.

The response by some Democrat politicians is to use taxpayer dollars to bribe teachers back to in-class instruction. In Nashville, there are 6,000 fewer students this year than last. To stem the tide and get teachers back in the classroom, Democrats have offered a financial bonus to any teacher who shows up. So far, It’s not working. Expect the offered bonus to get bigger.

Most Democrat politicians are opting for a more aggressive approach. They want to close off school choice alternatives all together. The Indiana School Boards Association recently launched a campaign against a proposed expansion of the state’s voucher program that gives poor parents more education options. They’ve also come down hard against Education Savings Accounts or ESA’s – a way parents can fund public school alternatives tax free.

Such moves present big problems for Democrats because school choice, charter schools, and education reforms are wildly popular across all income groups and demographics.

In the meantime, any family not lucky enough to get into a charter school, but who still wants their children to receive a decent education, must pay for it. For families who choose a private or parochial option, that means between $5,000 and $17,000, the median annual tuitions for parochial and non-parochial options respectively.

Having to pay both local school taxes and the costs for alternatives is a huge hit to a family’s income; sapping their ability to save, spend, and invest. It’s also a major drain on the economy.

Those costs will not wear well for Democrats come election time. To say they are in bed with teacher unions even if it means violating their oaths to serve constituents is to give adultery a bad name.

More than a third of delegates at the last three Democrat National Conventions have been members of teacher unions.

And now, Biden’s Covid relief plan calls for $170 billion in additional funds for schools. That’s on top of the $95 billion for Covid relief sent last year.

When it comes to education, Democrats are in trouble. To support meaningful education reform would be to bite the hand that’s fed them financially and put them in power. But if they fail to address the growing frustration among their own voters over suffering students, it will cost them votes.

That leaves Democrats only one message to their voters. It’s Republicans’ fault for pushing reforms that deplete public schools of money and raid their best students.

But as Democrat voters wake up to the failures of Democrat leadership and the meanness of teacher unions, and with the education of their own children on the line, making Republicans the bad guys for giving families more education choice will be a hard case to make.

Are All Woke Businesses Joining the Anti-Capitalistic Hard-Left?