In November 2020, filming began on Oslo: an adaptation of the revisionist history Broadway play about the fake peace process between Israel and the PLO terrorist organization.

That same month, the man at the center of both the play and the movie, Terje Rød Larsen announced that he was stepping down as president and CEO of the International Peace Institute after it was revealed that he had taken a $130,000 personal loan from Jeffrey Epstein.

The International Peace Institute is closely linked to the United Nations and its honorary chair is usually the UN Secretary General. The notorious pedophile didn’t just give Larsen money, he also pumped $650,000 into the UN-linked group through his “foundations” and the Norwegian paper that broke the story published emails showing that Larsen’s people were trying to move money from IPI back to Jeffrey Epstein. “For forms sake we should send it to Jeff, however I am sure we will get it back many fold!” Larsen appears to have written in one email. 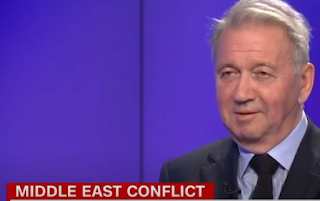 It was 2016. The date on the original loan was in 2013. All of this took place years after the original Epstein case and his conviction. The ex-UN diplomat knew whom he was dealing with.

But the Epstein scandal didn’t stop Oslo from being produced by Steven Spielberg anyway. Or HBO from moving forward with plans to air a story about a disgraced Jeffrey Epstein associate.

Neither HBO nor Spielberg are strangers to revisionist history or anti-Israel propaganda.

Spielberg’s most infamous movie, Munich, equated the terrorists murdering Israeli civilians with the Israeli operatives trying to stop them, and was the work of screenwriter Tony Kushner who had declared that he wished Israel had never existed. HBO has been responsible for a litany of anti-Israel flicks, most recently, Our Boys, which was protested by the families of terror victims.

But Oslo is awkward because a man linked to the world’s most notorious pedophile is its hero.

Oslo, the original play, was born when Terje Rød Larsen modestly proposed it to director Bartlett Sher who is also directing the HBO movie. The director and the diplomat are good friends.

“We were part of a historic event which we have waited twenty years to see written about,” is how Larsen pitched his story.

The “historic event” has been written to death. The so-called peace agreement has killed more people than many actual wars. The real problem was that the story was fading away. And, most particularly, Larsen’s starring role in the story which is key to his fame and his career.

The premise of Oslo is that Larsen and his wife, Mona Juul, who still serves as the Deputy Permanent Representative of the Norway Mission to the United Nations, got the “warring sides” to make peace by seeing each other as human beings for the first time. And it’s nonsense.

The true story of Oslo is how Israeli lefty radicals double-crossed their own country and government, violated laws against doing exactly what they were doing, made repeated concessions to the terrorists, and then presented a hoax of a peace agreement.

Arafat, the PLO, and the entire terrorist movement built around a fake ‘Palestinian’ nationality, never made peace, never recognized Israel, and were not going to stop killing Jews.

What was the whole thing really about? Long before Epstein, Larsen had been accused of trading cash for a Nobel Peace Prize. Kåre Kristiansen, a member of the Nobel Committee, alleged that Larsen got $100,000 from the Peres Center, a project of Israel’s notoriously corrupt left-wing foreign minister, to ensure that Shimon Peres would receive a Nobel Peace Prize.

The diplomat claimed that he had informed the Norwegian government to which it responded, “no one in the Foreign Ministry has known about these sums of money.” There were also suggestions that it would investigate the role that Mona Juul, Larsen’s wife, who was also getting the prize money, had played in getting those millions of kroner to the Peace Center.

In 2002, a conservative Israeli government bounced Larsen, who was being billed as ‘Mr. Peace’, after he falsely accused Israel of having “lost all moral authority” while it was fighting the Islamic terrorists behind the Passover Massacre of thirty people: most of them senior citizens.

Larsen’s false claims of an Israeli massacre in Jenin that was “horrifying beyond belief”, “a shameful chapter in Israel’s history”, and rife with “the stench of death” were disproven. Even the UN’s own report found that 52 died, most of them terrorists, along with 23 Israeli soldiers.

Two years later, the PLO declared ‘Mr. Peace’ persona non-grata making Larsen’s unwantedness in the region about the only thing that the Israelis and the terrorists agreed on.

A few years later, it was discovered that all of the ‘Oslo Files’, the papers related to the so-called negotiations, had vanished from the Norwegian Ministry of Foreign Affairs. The twists and turns in the search for those documents, and why they went missing would make for a much more interesting story than the tedious nonsense of Sher directing another glamorization of Larsen.

There are plenty of interesting angles to Larsen’s story that Spielberg and Sher won’t touch, but the real truth about Larsen is that his story matters much less than the devastation of Oslo. The backchannel wasn’t a triumph of peace, but a dirty leftist political trick that wrecked Israel’s security, touched off decades of intense violence in the region, and cost thousands of lives.

Oslo is another one of the same stories that the elite tell each other. Larsen and Sher got to know each other because their daughters attended the same Manhattan private school. Larsen and J.T. Rogers, the playwright, then met up at an “Upper West Side haunt” for drinks. Oslo did well on Broadway by way of being touted by the New York Times, and will be an HBO movie.

There is one giant hole in Oslo’s story about the power of Norwegian diplomats who send their kids to Manhattan private schools to make peace. There wasn’t and isn’t any actual peace.

Jeffrey Epstein thrived in these same elitist circles and was plugged into the same networks. When Larsen, previously earning around half a million a year as head of the IPI, needed $130,000, he was there to lend it to him. And provide cash and connections for countless members of the elite, trading favors, offering introductions, and palling around with everyone.

Oslo isn’t about Israel or Islamic terrorism. Like everything the decadent cultural industry of our country makes, it’s about that incestuous world whose key players all send their kids to the same private schools, hang out at the same bars, and agree on the same basic things. They’re also very good at not seeing things like abused teenage girls or thousands of dead people.

If Bartlett Sher wanted to make a truly relevant and groundbreaking play, he would tell the story of Jeffrey Epstein’s network and of the girls he abused, some of them the same age as his daughter. But that play, unlike his theatrical smears of American foreign policy in Afghanistan and the Middle East, would never be put on, and would be quickly sunk by the New York Times.

And Spielberg, and the rest of the gang, along with HBO, wouldn’t turn it into a movie.

The real life players and their fictional counterparts in this world give each other awards and good reviews. They write about the world, but the only world they know is their own, and despite the dictum of writing what you know, they have little interest in writing about the horrors in their own world, when they can write about how their friends brought peace to the Middle East.

Oslo unintentionally explains why the professional peacemakers failed so miserably. It wasn’t only Jeffrey Epstein’s abused girls they couldn’t see, but the limits of their own corrupt hubris. They promise to solve the problems of the people who aren’t as famous and connected as they are, but fail horribly every single time, only to spin those failures as historic successes.

And if the New York Times says so, it must be true.

The true story of Oslo is a tale of corruption, death, and bloodshed. It’s about the price that ordinary people paid when the elites got their way. It’s about Jewish senior citizens murdered while celebrating Passover, schoolgirls blown up on buses, and children shot in the head. It’s a million miles away from the world of Off-Broadway plays and Manhattan private schools, skyscraper boardrooms and Brentwood mansions that spawned Oslo’s revisionist history.

The violence unleashed by Oslo’s empowered terrorists in Israel fell heaviest on working class people riding the bus to their jobs or commuting to cheaper homes in Judea and Samaria.

While Oslo films in Prague, the terrorism continues in Israel. And Jeffrey Epstein’s old associates look forward to being able to watch Oslo’s message that the elites know best while paying no attention to the terrorism, to Larsen’s scandals, or to their own corruption.