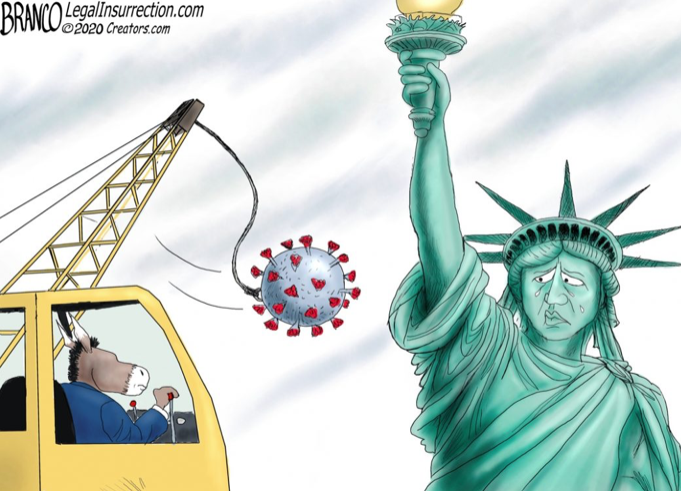 The early 19th century diplomat, Joseph de Maistre, famously said, “Every nation gets the government they deserve.” The same can be said for their economies.

The recent $900 billion Covid relief bill gives everyone $600. Pelosi, Schumer, and McConnell are all on board because they’re hoping 600 bucks will look like Congress is doing something – that their parties really “care” about the suffering of the American people.

That $600 will add about $160 billion to the deficit. Trump says it’s not enough. He’s right in that it’s not going to stimulate much of anything. $600 won’t change anyone’s spending habits. Trump wants $2,000 per American. Pelosi, Schumer and the Democrats are fully on board.

I’ll admit free money always sounds good. What family of 4 wouldn’t want an $8,000 New Year’s bonus even if it adds $465 billion to the federal debt.

After all, $465 billion isn’t that big a deal given the trillions we’ve racked up since Obama was sworn in.

But there are a couple of problems.

In 2013 the World Bank issued an analysis of worldwide sovereign debt between 1980 and 2008. They reported that debt to GDP ratios above 77% for developed countries, and 64% for still-developing countries, reduced future annual economic growth by 0.02 percent for each percent of debt above the threshold.

If the World Bank’s report is right, and given the source it’s likely on the optimistic side, we can expect at least a 1% annual decline in future economic growth in the U.S.

That assumes our debt does not rise, which Biden and Company have already promised it will.

Another factor to consider is the inevitable crash against the debt wall the entire world is about to hit. The debt wall is that point at which governments can no longer borrow money for a great many complicated reasons that pretty much boil down to there just not being enough left to borrow. When that happens, no country will be able to finance their existing debt much less run up additional debts.

Now, imagine Leader McConnell is successful in stopping the move to send every American $2,000. In one perverse sense, the results could be worse, or at least a lot faster getting here. That’s so because Georgia voters may well decide to punish Republicans for denying them a New Year’s bonus by electing the two radical Democrats vying in the run offs.

Sadly, Trump may soon be proved right that denying the $2,000 payout is political suicide for Republicans.

Should Republicans lose in Georgia, the biggest spending impulses of progressives will be unstoppable. It won’t just be a few million families who lose their jobs or a few thousand business owners who shutter their companies. It won’t just be a debt wall we hit, it will be an economic and social meltdown – a complete collapse of the kind Venezuela has experienced in the last 5 years, except worldwide. No one will be untouched and nowhere will be spared.

Even that dark eventuality though could foreshadow still worse times ahead. In the event of an International economic collapse, expect to Democrats to use their majorities to pack the courts and make their power complete. Their judges will likely rewrite the Constitution, and give Biden-Harris and Congress emergency powers to achieve their most radical hopes of an unbeatable political majority, a government run economy, and a world economic system.

McConnell and Senate Republicans are in a tough Catch 22 at least partly of their own making. Up the ante with a $2,000 per American buy-off and drive our economy into an unsustainable and destructive debt wall; or hold back the $2,000 and lose Georgia and suffer the terrible fall out that would mean.

Maybe it was the Democrat plan all along, and Republicans played into their hands.

Either way, it’s clear Americans as a whole don’t yet see the terrible damage big government spending will bring. If they don’t wake up soon, they’ll bring the trouble on themselves.

My New Year’s hope is that Republicans offer a new vision and an inspiring alternative to Democrat big government. If they don’t, they’ll deserve the coming trouble nearly as much as those who voted to allow it.

Emery McClendon: It's Time for America to Act Like An Adult

Greenfield: What a Stalin Quote About Rigging Elections Reveals About the 2020 Election