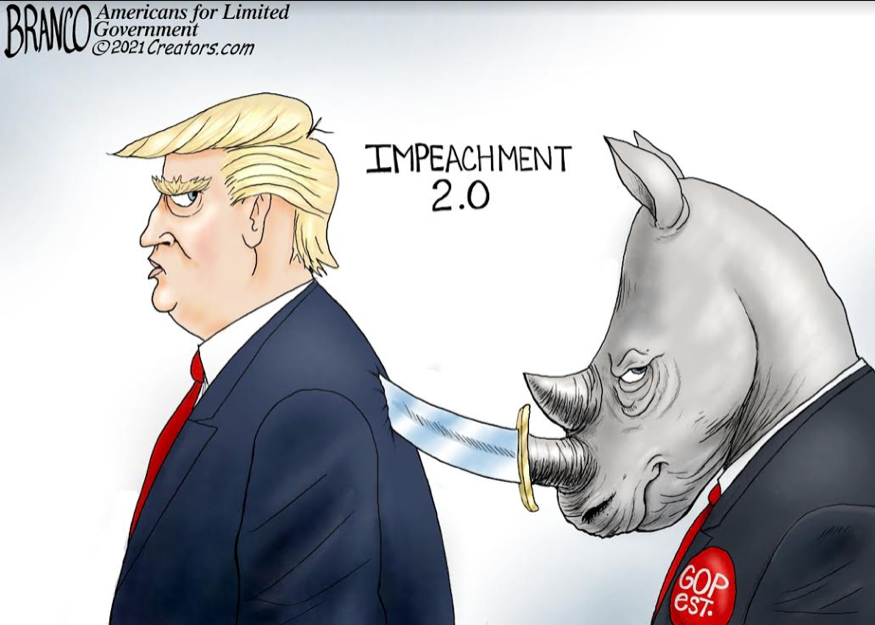 Tribal loyalty cuts both ways. You forgive members of your group because, well, they’re in your group. You make excuses for them. Conversely, if they embarrass you or bring disrepute to your group, you turn on them. You overlook whatever their good and find fault.

Liz Cheney and the 9 other GOP members of the House who voted for impeachment are doing that. They tolerate in Democrats what they cannot tolerate in Trump because he embarrasses them in a way Democrats cannot. Democrats are not part of their tribe.

There are many times when it’s not just appropriate to avoid judging those of other tribes, it’s noble. Fair and equal application of the law, however, is not one of those times. We either all live by the same rule of law, or we live where those in charge get to decide arbitrarily who will be subject to legal force and who will not – a description of totalitarians everywhere.

Congresswoman Cheney and company have no doubt read Trump’s speech. Trump’s language was far less incendiary than speeches you can hear any day of the week by BLM, urban politicians, or members of Congress. Except in Trump’s speech we see the huge ego he’s brought to every endeavor since he started in the New York real estate business. It’s that egotism that embarrasses establishment Republicans.

But embarrassment is not adequate grounds for impeachment or conviction. If it was, Mr. Trump would have been tossed from office long ago.

Yes it’s a political trial, and not a legal prosecution. But if it succeeds, it won’t play that way in Democrat efforts to justify criminal charges against President Trump as soon as something can be found with which to charge him. The long knives of Democrat vengeance are out. With their votes, Republicans who support impeachment are helping sharpen them.

If they were truly interested in the fair application of justice, wouldn’t Cheney and her Republican allies hold Democrats to the same moral and legal standards they insist Trump abide?

The allegation is that Trump’s protesting the election results and insisting election laws were violated improperly inflamed the passions of his supporters which led to violence. Yet, Democrats, far and wide, have made similar assertions for years. Do Democrats calling it voter suppression rather than “massive fraud” change the nature of the allegations? And what about the many grievances, riots, and violence unfounded accusations of voter suppression have caused? Yet Cheney and company aren’t calling for the prosecutions of Stacey Abrams, Al Sharpton, or the leaders of the BLM.

And how differently might things have turned out had every single leader of the Democrat Party for the past four years not claimed Trump an illegitimate president, an agent for Russia, or guilty of some unproved crime? But Cheney isn’t calling for the wholesale prosecutions of Democratic Congressional leaders. Nor is she suggesting the anchors at CNN or MSNBC be tried for aiding and abetting the political turmoil of the last 4 years which eventually culminated in much violence and destruction.

The argument goes that were it not for Trump’s poor behavior and impolitic remarks in contesting his loss, the hundreds of thousands who came to protest would have stayed home, the march would never have happened, the few dozen who actually violated the law would not have done so. Maybe.

But what then of Joe Biden who refused to condemn antifa’s and BLM’s rioting, looting, and murdering? What about Kamala Harris who personally contributed to bail out rioters and other felons that afterward re-engaged in their felonious crimes including assault, wanton destruction, and murder?

And what about all the local politicians like the Mayor of Los Angeles, the Minneapolis City Council, the Mayor of New York City, and many others who slashed police department budgets? Crime, including rape and murder, skyrocketed in those places. Are those local officials being held legally responsibility?

Donald Trump no doubt bears some responsibility for what happened on January 6th. But not just Trump. The establishment is also responsible. It was their covert disregard, and sometimes overt contempt, for regular folks that gave birth to the anger, alienation, and revolt that elected Trump in the first place.

Now many in the establishment seem to believe they can erase the grievances of his supporters by barring Donald Trump from politics. Four years later, they still don’t understand; Trump was never the instigator of America’s frustration, but only ever a result.

It’s certainly frustrating for us conservatives that Trump’s flaws so thoroughly work against his strengths – both are formidable, but narcissism is almost never a good look.

That ego diminishes his remarkable achievements. He shepherded a booming economy, a jobless rate of 3.6%, household incomes rising faster for the poor and middle class than for the wealthy, and poverty rates, especially for black and Hispanic Americans at record lows. He often wiped away much of the good with a single tweet.

Some say he was undone by the COVID virus. That’s not it. His sometimes poor handling of the coronavirus was ever only just a symptom of his original sin: self-centeredness. It’s the same reason he won’t recognize his election loss which his opponent allege contributed to the violence on January 6th.

And it’s why despite his many storied achievements, Trump will leave office largely, and perhaps permanently, discredited no matter the outcome of impeachment.

That doesn’t solve the more fundamental problem present in America.

Americans elected Donald Trump at least partly because they were sick of the wealthy and politically connected living by different rules than those forced on them by their rulers. That sickness was made worse every time those elites belittled them and disparaged their values.

Holding Donald Trump to a different moral and legal standard than you do the other party – or other members of the elitist establishment — will make the sickness worse. It’s displays more vividly the increasing hypocrisy of our politicians and their disdain for the rule of law.

Your embarrassment is inadequate grounds to impeach a president. If evidence exists of some egregious wrong-doing by Mr. Trump that led directly to mayhem and violence, then impeach away. But bring charges against the rest of those guilty of the same or worse rhetoric and behavior – regardless of party or political power. Or, get off your self-righteous high horse.

Much more than your personal mortification is on the line here. When justice isn’t blind, it isn’t just; and decency, fairness, and rule of law become the casualties.