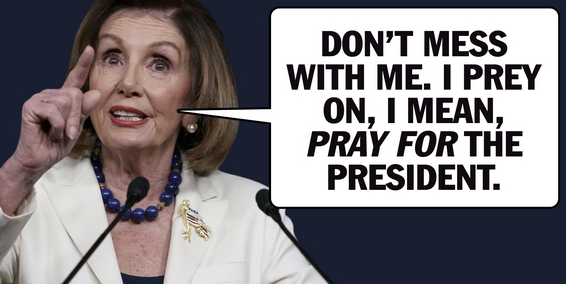 Now that they have seemingly gotten their way and banished Trump to the outer reaches, why do Democrats continue to hound Donald Trump with a 2nd impeachment?

Writing in 1941 of European dictatorships, George Orwell said, “In our age there is no such thing as ‘keeping out of politics.’ All issues are political issues, and politics itself is a mass of lies, evasions, folly, hatred and schizophrenia.”  Sound familiar?

It isn’t always or constantly so. Politics in it’s finest sense is understood to be the means by which people resolve questions of human need. But like the fascists and communists in Orwell’s time, Democrat political leaders today aren’t interested in answers, but in issues. Answers may fix, but issues elect, and political success for Democrats nowadays is only about gaining and holding power.

It’s as cynical as it is true.

Consider the new mantra by Democrats at the dawn of the Biden age. Expressions of hope for unity are being hailed by our moral arbiters in the media and Democrat Party as evidence of Biden’s goodness – as though it was a close thing whether he might instead advocate division and conflict. Whew, breathe easy friends, Biden comes down on the side of unity.

It’s ridiculous. The last thing Biden, Pelosi, or their fellow Democrats want is unity. They could have unified at any time in the past 4 years over any number of issues on which Trump agreed with Democrat goals. Infrastructure, dreamers, budget reform, Covid relief are just a few. Instead, it was always resistance all the time.

Only Republicans see consensus as a strategy for success. For Democrats, consensus is a tactic. That’s because success doesn’t mean the same thing to the different partisans. Republicans want to fix problems. For Democrats, success is winning elections. Consensus doesn’t win. Polarization wins, at least so long as more voters are polarized on your side than their’s.

Polarization in itself isn’t bad. When the contrast is centered on differing solutions, Americans can make a positive choice about the direction they prefer.

But when a political party’s agenda becomes anathema to the majority, polarization gets personal. In that instance, your political opponents must not be portrayed as competitors, but as enemies who deserve at least personal rejection, and preferably permanent destruction.

That’s why Pelosi et al need Donald Trump. It’s not that they can’t characterize the winsome Ben Sasse as a wicked far-right extremist. After all, that’s exactly what they did when the intensely middling Mitt Romney faced off against Barack Obama in 2012. It’s just that Donald Trump helps them drive the polarization that is their only hope in a way more temperate souls might not.

Pelosi’s insistence that Trump’s impeachment is required to protect us from his ever again achieving high political office is melodramatic fiction. Impeachment is rather a critical component of the ongoing Democratic initiative to make Trump the central distinction between the two parties.

If Americans distinguish between the parties on the basis of actions and ideas, Democrats have to make a rational case for the irrational Executive Orders Biden signed during his first week as President.

They can’t, and they won’t try because doing so won’t win. A referendum on Biden-Harris policies would be a disaster for Democrat hopes. Better to continue driving negative messages about Donald Trump. Especially if it keeps the Republican Party divided. Even better if it leads to the creation of a splinter party that guarantees Republican disunity.

Democrat policies won’t win so the politics must be personal and the personality must be unacceptable to the majority.

That means the obsession will continue. It won’t stop unless a better diversion is found. They’ve about exhausted “pre-existing conditions,” “repealing social security,” and “systemic racism,” though they keep trying. Until a better diversion comes along though, Democrat hopes will continue to center on their perception of Donald Trump’s power to polarize.

Democrats love Trump for that. But then love isn’t rational. And the polarization Democrats seek may ironically help divide Americans against them.

That will certainly be true if Americans trip to the real reasons Democrats so bitterly attack Trump and his supporters; and, especially if voters look behind the curtain and consider the far left agenda Democrats are pursuing.

We can only hope.

Will Johnson: The Left's Lust to Destroy America

Greenfield: The Language of the Unheard