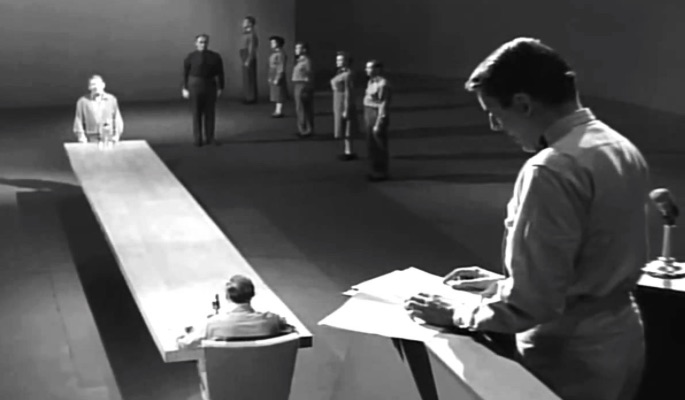 (This article was originally published July 11, 2015 during the Obama administration. It definitely bears repeating today, January 5, 2021.)

“Imagine, if you will, a time and place where there is no history because there are no books.  There is no religion because there is no Bible.  But even before the Bible was eliminated, God was disproven and banned from worship or mention.  The only thing that exists is The State, run by a small group of elites who rule and judge according to their own beliefs, or lack thereof…”

Rod Serling wrote about this type of world in a 1961 episode of The Twilight Zone called, “The Obsolete Man“–and the similarities with today’s world are stunning.

The story, similar to Ray Bradbury’s Fahrenheit 451, takes place in a future totalitarian America.  ‘Romney Wordsworth’ (played by Burgess Meredith) is on trial for the crime of being obsolete, unworthy of life.  His occupation, a librarian, is considered a crime punishable by death, as is his belief in God.  He is being prosecuted by the Chancellor, who deems that Wordsworth is not an asset to the State and thus needs to be eliminated.

The opening, narrated by Rod Serling:

You walk into this room at your own risk, because it leads to the future; not a future that will be, but one that might be.  This is not a new world: It is simply an extension of what began in the old one. It has patterned itself after every dictator who has ever planted the ripping imprint of a boot on the pages of history since the beginning of time. It has refinements, technological advancements, and a more sophisticated approach to the destruction of human freedom.  But like every one of the super states that preceded it, it has one iron rule: Logic is an enemy, and truth is a menace. (Camera switches to the convicted man) This is Mr. Romney Wordsworth, in his last forty-eight hours on Earth. He’s a citizen of the State, but will soon have to be eliminated, because he’s built out of flesh and because he has a mind. Mr. Romney Wordsworth, who will draw his last breaths in the Twilight Zone.

Serling’s ‘The Obsolete Man’ was meant to highlight the dangers of totalitarianism and the importance of maintaining and fighting for our God-given rights (including freedom of religion and speech). Once The State eliminates those, nothing else matters.

When Wordsworth asks, “History teaches you nothing, does it?” The Chancellor’s response is that leftists like Hitler and Stalin simply didn’t go far enough. The Chancellor also mentions ridding the world of the old and unhealthy (aka eugenics):

“Too many undesirables left around and undesirables eventually create a corp of resistance. Old people for example, clutch at the past and won’t accept the new. The sick, the maimed, the deformed, they fasten onto the healthy body and damage it. So WE eliminate them! And people like yourself, they can perform no useful function for The State, so…we put an end to them.”

How far away are we from this scenario?  In 2012 the Democrat National Convention had to vote 3 times to determine whether or not they would continue to recognize God (and establishing Jerusalem as the capital of Israel) in their platform.  The very close decision to accept both was heartily booed.

Throughout the Obama presidency, Judeo-Christianity was under attack like never before in America.  Most recently E.O. Wilson, a Pulitzer Prize-winning sociobiologist and respected leftist, claimed organized religion is destroying the “tribal structure” of the Earth:

“All the ideologies and religions have their own answers for the big questions, but these are usually bound as a dogma to some kind of tribe,” he said. “Religions in particular feature supernatural elements that other tribes — other faiths — cannot accept… And every tribe, no matter how generous, benign, loving and charitable, nonetheless looks down on all other tribes. What’s dragging us down is religious faith.”

And this year, following continual cries of racism–spurred on by The State–leftists are currently trying to eliminate our history and fighting to remove all traces of our past.  Using groups like ‘Black Lives Matter’ and ‘Disarm NYPD’, they claim their latest target, the American Flag, represents ‘slavery and oppression.’

In 1963, two years after Rod Serling’s ‘The Obsolete Man’ aired, a list was added to the Congressional Record. Taken from former FBI agent Cleon Skoussen’s book ‘The Naked Communist“, the list represents 45 goals of the Communist Party to take over America.  Following is the full list.  Sadly, many have already been fully implemented, or are in the process of as we speak.  See how many you recognize right this moment (emphasis mine):

1. U.S. acceptance of coexistence as the only alternative to atomic war.

2. U.S. willingness to capitulate in preference to engaging in atomic war.

3. Develop the illusion that total disarmament [by] the United States would be a demonstration of moral strength.

4. Permit free trade between all nations regardless of Communist affiliation and regardless of whether or not items could be used for war.

5. Extension of long-term loans to Russia and Soviet satellites.

8. Set up East and West Germany as separate states in spite of Khrushchev’s promise in 1955 to settle the German question by free elections under supervision of the U.N.

9. Prolong the conferences to ban atomic tests because the United States has agreed to suspend tests as long as negotiations are in progress.

10. Allow all Soviet satellites individual representation in the U.N.

11. Promote the U.N. as the only hope for mankind. If its charter is rewritten, demand that it be set up as a one-world government with its own independent armed forces. (Some Communist leaders believe the world can be taken over as easily by the U.N. as by Moscow. Sometimes these two centers compete with each other as they are now doing in the Congo.)

12. Resist any attempt to outlaw the Communist Party.

13. Do away with all loyalty oaths.

18. Gain control of all student newspapers.

19. Use student riots to foment public protests against programs or organizations which are under Communist attack.

29. Discredit the American Constitution by calling it inadequate, old-fashioned, out of step with modern needs, a hindrance to cooperation between nations on a worldwide basis.

30. Discredit the American Founding Fathers. Present them as selfish aristocrats who had no concern for the “common man.”

31. Belittle all forms of American culture and discourage the teaching of American history on the ground that it was only a minor part of the “big picture.” Give more emphasis to Russian history since the Communists took over.

32. Support any socialist movement to give centralized control over any part of the culture–education, social agencies, welfare programs, mental health clinics, etc.

33. Eliminate all laws or procedures which interfere with the operation of the Communist apparatus.

35. Discredit and eventually dismantle the FBI.

38. Transfer some of the powers of arrest from the police to social agencies. Treat all behavioral problems as psychiatric disorders which no one but psychiatrists can understand [or treat].

39. Dominate the psychiatric profession and use mental health laws as a means of gaining coercive control over those who oppose Communist goals.

42. Create the impression that violence and insurrection are legitimate aspects of the American tradition; that students and special-interest groups should rise up and use [“]united force[“] to solve economic, political or social problems.

43. Overthrow all colonial governments before native populations are ready for self-government.

At the end of Serling’s ‘The Obsolete Man’, Wordsworth does something one can’t imagine happening on television in 2015:  He reads directly from the Bible.

Wordsworth: The Lord is my shepherd I shall not want. He maketh me to lie down in green pastures. He leadeth me beside the still waters. He restoreth my soul. He leadeth me in the paths of righteousness for His namesake. Yay, though I walk through the valley of the shadow of death, I shall fear no evil for thou art with me….

Wordsworth: Thy rod and thy staff they comfort me. Thou preparest a table before me in front of mine enemies. Thou annointest my head with oil. My cup runneth over. Surely, goodness and mercy shall follow me all the days of my life.

Wordsworth: Defend me from them that rise up against me. Deliver me from the workers of iniquity and save me from the bloody men. For lo, they lie in wait for my soul. The mighty have gathered against me. Not for my transgressions, not for my sins, O God….They run and prepare themselves without my fault, await to help me and behold. Then therefore, o God of hosts.

Wordsworth: The fool that said in his heart, “There is no God.” The Lord looked down from heaven upon the children of men to see if there were any that did understand and seek God…

The episode ends with Rod Serling’s words of warning:

The chancellor, the late chancellor, was only partly correct. He was obsolete, but so is the State, the entity he worshiped. Any state, any entity, any ideology that fails to recognize the worth, the dignity, the rights of man, that state is obsolete. A case to be filed under “M” for mankind—in the Twilight Zone.

President Trump Most Admired Man in 2020