The year that the Supreme Court ruled in favor of the Trump administration’s Islamic terror state travel ban, an Iraqi member of ISIS applied for American citizenship. 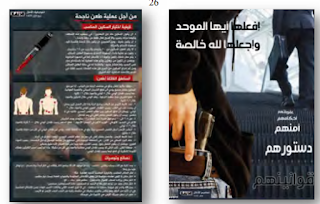 Hawazen Sameer Mothafar didn’t have much to worry about. Not only was he already living in the United States, but under political pressure, Iraq had been taken off the travel ban list.

And no one would have suspected Mothafar of being an ISIS terrorist. He was in a wheelchair.

When Mothafar was asked at his immigrantion interview this year whether he was involved with a terrorist organization, he must have thought it was a formality. But three months later, Mothafar was under arrest, charged with lying to a government agency, and aiding ISIS.

Mothafar not only managed to get through an immigration interview while denying any terrorist ties, but he spoke in court through an Arabic translator, suggesting a poor grasp of English.

Not only did our immigration system make an alleged ISIS member a citizen, but took an immigrant with nothing to offer this country, who doesn’t even speak the language, and who, according to his lawyer, has to be cared for by his family, and welcomed him in.

Over a thousand Iraqi refugees have been resettled in Portland, Oregon. The small city of Troutdale near Portland, once an all-American locale perfect for picture postcards, has absorbed some of the spillover. And there was nothing all-American about Mothafar.

Mothafar hadn’t come to Troutdale for the annual summerfest parade (cancelled this year because of the pandemic) or hiking past waterfalls. When he came into town under the great ‘Gateway to the Gorge’ arch that’s Troutdale’s claim to fame, he was coming for Jihad.

While Mothafar is disabled, he could still use a computer. And that’s what he did.

A senior ISIS official said that when the Islamic terrorist group needed new email and social media accounts, it was Mothafar’s job to get “new accounts when we needed new accounts as soon as possible.”

But Mothafar was allegedly doing a lot more than just providing tech support for the Jihad.

Mothafar claimed that he had been an ISIS supporter since 2014 when the Islamic terror group first gained worldwide attention. Last year, he made the ba’yat pledge, an oath of allegiance to the Caliph of ISIS, who would be caught hiding out and killed by the Trump administration later that same year, binding him to full unquestioning obedience to ISIS and to its leader. Such oaths are often taken before its members make some larger commitment to the terror group.

Earlier that year, Mothafar had ambiguously told an ISIS supporter that he wouldn’t use his real name because, “if published for the foundation, it could mean 4 terror.”

But in 2015, Mothafar had already been working on the ISIS media operation. He initially ran ISIS chat rooms and channels, but he later began working on Al-Anfal’s Jihadist propaganda.

Al-Anfal is an ISIS online media outlet, but literally means the spoils of war. That chapter of the Koran has been used as code for campaigns of extermination against non-Muslims and different Islamic sects and populations. ISIS, many of whose members and leaders had come out of the ranks of Saddam Hussein’s Baath Party, embraced Al-Anfal as a promise that its Jihad would echo the brutal Al-Anfal of Mohammed and of Saddam Hussein in his Anfal massacres.

The Koranic chapter of Al-Anfal contains some of the most brutal verses in the Koran, including its call for beheading,

“I will cast dread into the hearts of the unbelievers. Strike off their heads,” one verse declares.

When Al-Anfal launched in the fall of 2017, Mothafar “edited, produced, published, and disseminated” the Jihadist publication with its call for the mass murder of non-Muslims.

The first issue featured a chart of the best places to stab victims in the “sensitive areas of the body”. “Effective Stabbing Techniques,” like the other Al-Anfal Jihadist propaganda, was coming through a publishing process that took it, not through Baghdad, but through Oregon.

The December issue featured an article titled, “How Does a Detonator Work”, and a picture of a burning Statue of Liberty with the caption, “Soon in the Heart of Your Lands.”

Next year, Mothafar was assembling pictures of explosives and western cities, messaging, “the images of destroyed infidel cities will be useful.” Propaganda like this played a crucial role in the alarmed responses to sophisticated ISIS posters threatening attacks on America.

Some of these posters warned that the ISIS terrorists were among us. What they did not mention was that one of these terrorists was in a wheelchair and living near Portland.

And was waiting to apply for American citizenship.

Right after the hearing, Mothafar was set free on the condition that he doesn’t “disseminate any information in support of any designated terrorist organization”, or leave Oregon.

And so the same system that allowed Mothafar to spread his hate set him loose again.

Removing Iraq from the list of travel ban countries was made for political reasons to avoid offending its government. Iraq is the epicenter of ISIS and of Islamic terrorism. The countries with the most Muslim refugees are also generally the ones with the worst terrorist problems.

Mothafar’s immigration paperwork, mentioned in the indictment, meant filling out a form that asks prospective citizens whether they’ve ever been associated with the Communist Party (to my knowledge, no one has recently been indicted for lying about this), any “totalitarian party” (a dubious category), or a “terrorist organization”.

There are repeated mentions of Nazi Germany: a laudable if belated move that began long after most of the Nazi war criminals were already living here, and one that is no longer relevant because few Nazi war criminals are likely to be moving to America at this late date.

There is still no mention of ISIS or any Islamic terrorist group. The immigration paperwork hardly required Mothafar to lie because its questions are dated, some to the 40s or 50s, others with their obsession with guerrillas and paramilitary units to the Latin America of the 80s.

A generation that has made Islamic terrorism into the scourge of the free world is hardly reflected in our immigration system which is still screening for Communists, Nazis, and Latin American guerrilas and paramilitary units. It’s a failure that sums up our failed response to 9/11.

There is only one single mention of terrorism in the form and it doesn’t reference Islam.

The only reason Mothafar got nailed for, among other things, making false statements in his immigration form and his citizenship interview, is that the authorities were already watching him. And based on the use of FISA surveillance in his case, it’s likely that he was accidentally swept up while the United States was monitoring ISIS members operating in Iraq and Syria.

Our immigration system hasn’t adapted to dealing with Islamic terrorism. And it’s not acting in the best interests of Americans. If it were, Mothafar, in a wheelchair, cared for by his parents, would never have been a candidate for immigration or citizenship in the United States.

Americans felt sorry for Mothafar. And, as usual, they paid the price.

Now, after, no doubt, spending a small fortune on caring for Mothafar over the years, the taxpayers will spend an even larger fortune on his trial, and then, probably, on his imprisonment, at which point he’ll become a full-time burden on the taxpayers, and then on his life after prison.

None of this would have been necessary if the United States would stop taking in Muslim refugees from terror states and then putting them through an immigration process that hardly even recognizes that we’ve spent a generation fighting Islamic terrorism from abroad.

“This defendant is a legal permanent resident of the United States who abandoned the country that took him in and instead pledged allegiance to ISIS and repeatedly and diligently promoted its violent objectives” US Attorney Billy Williams declared.

Were we really expecting anything else?

In the previous decade, Samir Khan, a Pakistani, had been churning out Jihadist propaganda for Al Qaeda’s Inspire magazine from Queens, New York, and then Charlotte, North Carolina. Inspire’s fare included, “Make a Bomb in the Kitchen of Your Mom”, which may have been used by the Boston Marathon bombers.

One of his articles was titled, “I Am Proud to Be a Traitor to America.”

When he was taken out alongside Al Qaeda leader Anwar Al-Awlaki, the Obama administration offered a condolence call to the Khan family, and, along with Al-Awlaki, Khan became a cause celebre for lefties and libertarians, and his family who accused the United States of “assassinating” him. The Mothafar case shows how little we’ve learned since then.

They can’t take pride in being traitors to America if we don’t let them in.

California's Internet Censorship Office is Watching What You Say