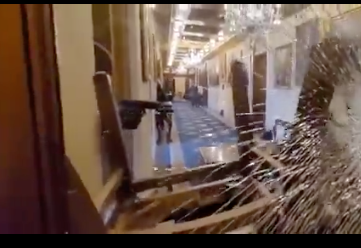 On Wednesday, January 6, as Congress counted electoral college votes, a few dozen alleged Trump supporters breached the capitol’s security. Some even made it to the floor of the Senate. Members of Congress panicked and evacuated their respective chambers.

Watching in real time, it was obvious there was a significant difference in the way partisans addressed the event. Democrats clearly saw it as a political opportunity. They blamed Trump – as they have for the past 4 years. They painted the picture of a blood thirsty egomaniac bent on destroying all that was good about America in a futile effort to save his presidency. By extension, they suggested those in the party he led were at least cowardly, and probably complicit, in supporting his ambitions if not his means.

All this despite the fact that Republicans, as much as Democrats, condemned the violence, repudiated the rioters, and joined to foil any hope Trump may have had that the count of electoral college votes would be stopped.

Republicans did their duty while Democrats made political hay.

Biden called it sedition and insurrection. Corey Booker came to tears as he expressed the fear to which he’d been subjected. Democrat after Democrat spoke of thugs who by attacking the capitol building were conducting an all-out assault against democracy, liberty, and freedom.

Where was all that outrage against unjustifiable violence last year when rioters burned cities and destroyed businesses? Where was the horror at the murder, assault, rape, and looting committed by protesters then? Remember Biden’s refusal to condemn antifa or BLM rioters?

Trump is paying a price in waning influence and damaged legacy. He has severely limited his chances of dominating the Republican Party going forward. And not just because of Wednesday’s actions.

Trump announced Monday night at a rally in Georgia he’d likely be blamed if Republicans lost the senate run-off’s there. He’s right. He deserves the blame just as he does for losing a re-election he would have won but for his egocentric twitter feed.

Rather than the elections in Georgia being about arguably the two most radical candidates ever elected to the United States Senate, Trump insisted on making the election about himself and his grievances.

His allegations of election fraud, his rabid denunciations of Georgia’s Republican leadership, his condemnation of Republican Senators for refusing to pass a $2,000 Covid relief bill, and his demand that Georgia Secretary of State Brad Raffensperger “find” 11,781 votes to overturn the November election result all worked to undermine Republican chances.

Turnout in Georgia’s run-off was about 89% of November’s turnout. Among minority voters it was higher. In the Republican areas of the state it was lower. Republican suburban and college educated women didn’t go for Trump in November and it cost him Georgia. Many of them carried that Trump antipathy over to Kelly Loeffler and David Purdue because the Republican candidates seemed enthusiastic about entwining their destinies with Trump’s.

Other Republican casualties of Wednesday’s rioting are probably the presidential aspirations of Senators Ted Cruz and Josh Hawley. In linking themselves to Trump’s demands that the electoral college count be frustrated, they’d hoped to inherit his populist following. That following though, while no less enthusiastic, will shrink considerably in coming months. That’s the price Trump and his closest political allies will pay.

But America will pay too. The economic costs of Democrat control over both the executive and legislative branches will be more than we can currently imagine. But the cost to America’s confidence in the institutions of our politics and governance is on regular display.

Most Americans are increasingly coming to believe the political elites of both parties are largely tone deaf to their concerns. They see the left especially as intent on pursuing an ideological agenda largely abhorrent to American values. And evidence of the rampant rise in the hypocrisy of our betters is everywhere you look. It’s all working to drive a stake through the heart of our confidence in our political leaders.

We heard a lot of whining about how that lack of confidence was contributing to American disunity Wednesday night. And it’s true that Americans are more divided today than perhaps at any time since the Civil War.

But Trump didn’t cause the pervasive incivility and disunity the Democrats and never-Trumpers so lament. They did. Their naked political ambition and towering cynicism are bad enough. But their insistence on forcing their ideology on us no matter the cost to our freedom or economic well-being has left those of us who still value liberty and personal dignity no choice but to resist.

Like it or not, we’re onto them, and all the phony tears progressives spill over American disunity will only guarantee it continues to grow. We see their ravenous hunger for what it is, a desire for political power and economic control. And we understand that hunger will consume our freedom and our families if we let it.

We don’t swim with crocodiles, no matter how many tears they shed.