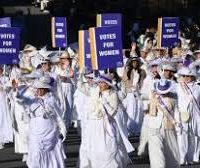 On August 18th, 1920, the historic Nineteenth Amendment to the US Constitution was ratified. It granted all Americans, irrespective of their sex, the right to vote – extending this right to women and thus, drafting the first step towards inclusion, this legislation sought to level the field for all and ensure equal opportunities along the way. It wasn’t an easy run for the women who struggled hard to make this happen.

As all revolutionary moments in history display, this too had a trail of events and relentless battles against the norm of patriarchal decision-making that needed to be faced. anti-suffrage activists threw hurdles at the decades of struggle that those advocating for female enfranchisement were coursing through. A Supreme Court verdict in 1875 ruled against women’s suffrage, rejecting it by all means. Even the first women’s rights convention did not, during its initial days, find unanimous support for the right to vote for women. The 19th Amendment was a debate about the 15th Amendment, which decreed that a citizen’s right to vote could not be “denied or abridged by the United States or by any State on account of race, color, or previous condition of servitude.

Despite these constant disruptions caused by societal elements that felt threatened by a rocking of their safe cradles of privilege, the NAWSA-led Women’s Suffrage Movement saw success in the end. The story behind the Nineteenth Amendment, for these remarkable feats achieved, spells resilience and grit. While we celebrate the 100th Anniversary of the Amendment, it is, therefore, important for us to turn to the spirit and values encompassed by the suffrage movement led by strong independent women, their oppression and bondage removed and women’s freedom and self-determination rang clear. This is sure to serve as an inspiration to the millions of young girls and women who are still finding it difficult to push through the gigantism that the patriarchy has erected for itself in each field.

According to media reports, the US is still 100 years away from achieving equality. The disparity is still prominent here in politics and business. Even if we look at the Women’s Suffrage Movement and its culmination in the 19th Amendment, it can be noted that the same right was extended to African American Women only decades later. With intersectional inequalities persisting, the journey towards a society that practices equity most of all will be a difficult one. In terms of gender equality, the US today ranks 53rd out of 153 countries in the World Economic Gender Gap Report – while we are the leaders in all other areas, why are we lagging in this respect? Are women’s rights just not as significant as the other causes for which earlier administrations had devised their policies? Income gaps and political under-representation more so for the Republican party are just two of the numerous reasons that keep the country at a distance from achieving the goal of parity. Workplace security is yet another crucial issue that comes into the public discourse once in a while and rushes off courtesy of the media’s appetite for the ‘greater’ news.

What women need most of all is the right mix of our own capabilities, the windows of opportunity, and factors that encourage us to proceed – with any of these going out of congruence with the rest, there’s a greater chance of a retreat to the long-dominant status quo of patriarchal tendencies. If a woman, throughout her growing years and after is fed with a continual reminder of her being ‘lesser’ than her male counterparts or of her apparent weakness, the emotional tug this creates eventually conditions her to rethink her original desire to do well and stay independent – this is not the ideal system of functioning that any of us need. To be subjected to the ideological apparatus of a predominantly male dictates means to be ripped of one’s own identity. In a world that stresses the importance of individuality and independence, adopting a double standard and thus, evolving into hypocritic economies would do more harm than precedented.

Women are responsible – they can chart their own destinies, and build a world for the future to dwell in. Their hand at this evolution cannot be overlooked – sustainable existence does not pop up without a well-understood effort to be inclusive in all approaches, be it of administration or the daily workings of the community. Everybody needs to recognize the role that women play and there is no better occasion than this centenary for us to shift our gears and alter our attitudes to remove all signs of prejudice. There are plenty of glass ceilings that are set rigidly over our heads, keeping us from reaching out and grabbing the fruits of our toil – shattering these is not an impossible task. But, it will take much more than the present pace of progress to grab hold of it faster. The red tapes tied around all initiatives that advocate equity need to be torn apart and the process of integration needs to be accelerated without further excuse.

And to those who continue to question our strength and efforts as women, there is but one thing to utter and that is, a reiteration of what Dorothy Day said:

“People say, what is the sense of our small effort? They cannot see that we must lay one brick at a time, take one step at a time. A pebble cast into a pond causes ripples that spread in all directions. Each one of our thoughts, words and deeds is like that. No one has a right to sit down and feel hopeless. There is too much work to do”

Will Freedom’s Future Battles Be Fought Behind Enemy Lines?

Greenfield: A Woke Museum in an Illiterate City Goes for Broke