Even before Covid-19, the world’s developed economies were being cross-pressured by innovations in technology, shifts in culture, and radicalized strains of political thought.

These forces were already poised to drive a revolution even bigger than the industrial revolution of the 19th century. But rather than the decades it took to transition through that economic transition,, the coronavirus pandemic has narrowed our current transition to less than 24 months. 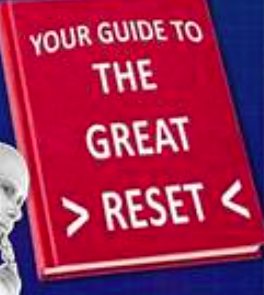 Expect chaos. And driving that chaos will be the corporatists, politicians, celebrities, academicians, and one-worlders from he World Economic Forum based in Davos, Switzerland. They call their plan “The Great Reset,” and they promise it will give us a new sustainable approach to correcting the world’s economic ails after Covid.

Although they’re keeping many of the details under wraps, the general direction is clear.  The Davos manifesto insists the world should move toward massive new government programs along the lines of those proposed by Alexandria Ocasio-Cortez in her Green New Deal.

They’ve intentionally avoided calling it socialism like she does, but a rose by any other name still smells like a rose. This plan’s odor is closer to the genus of landfill than rose.

Klaus Schwab, the founder and executive chairman of the World Economic Forum launched the initiative by proposing wealth taxes, additional regulations, and massive Green New Deal government programs. He said, “Every country, from the United States to China, must participate, and every industry, from oil and gas to tech, must be transformed.” “In short,” he wrote,” we need a ‘Great Reset’ of capitalism.”

But he didn’t stop with economics, he went on to explain, “all aspects of our societies … must be revamped,” “from education to social contracts and working conditions.”

Will Joe Biden and Kamala Harris go along? So far, the appointees they’ve tagged to serve in high economic positions suggest there’s no question. Of course, they will. John Kerry is chomping on his bit, ready to chew it off and unleash his new authority on every aspect of American society. As envisioned by the gang in Davos, the “Great Reset” could make Kerry more powerful than the president.

Some of Biden’s advisors claim the “Reset” is only temporary, until we’re through the worst of the pandemic. But most are already weaving their arms over the really big crisis already confronting us, it’s climate change and it isn’t going anywhere soon.

If you’re wondering how a bunch of elitists in Switzerland can convince all the economies of the world to go along, this is how. They’re promising “The Great Reset” as a plan to redistribute money from the world’s most successful economy, to everyone else.

Sharon Burrow, the general secretary of the International Trade Union Confederation, made it  clear when she said, “We need to design policies to align with investment in people and the environment, but above all, the longer term perspective is about rebalancing economies.”

For any but the world’s strongest economies, It’s an argument as enticing as telling an indebted college graduate, support me and all your college debts will disappear.

If you happen to be the world’s single strongest economy, as the United States still is, The Great Reset will be an existential disaster. For the U.S. and anyone else with a mostly free market economic structure, The Great Reset is nothing more than trickle up poverty.  In the end, no one will get richer, everyone will get poorer. And that’s ok it seems with the Davos crowd, they don’t care if socialism makes everyone poorer as long it makes the wealthy poorer too.

Of course, China is on board. They see the chance to broaden socialist policies as a way to shift the center toward Communism. They also see any chance to hobble the economies of the west, as a way to further their own goal to dominate the rest of the world economically and militarily.

This isn’t a distant threat. Davos meets again this upcoming January. “The Great Reset” is agenda item 1 and done.

What can we do? Well, the first battle in the fight over the Davos ‘Reset’ is in the Senate runoff elections in Georgia, January 5th. It’s critically important free-marketers beat the internationalists who are already engaged there. It’s estimated George Soros, Michael Bloomberg, and the far left progressives of the Democrat Party will spend upward of $1 billion to win those two Senate run-off campaigns.

They know if they win there, they control the Senate and they can have their way with the U.S. economy. It won’t be pretty.

If they succeed, and you’re self employed or own a small business, expect times to get hard. If you’re lucky enough to be working for one of the big multi-national corporations steering the Davos ship, you’ll still have a job, but don’t expect to be immune from the coming economic squeeze unless you’re breathing the rarefied air in the C-suite.

Small and family-owned businesses get hit hardest by the Davos globalists. But you won’t be able to count on the Chamber of Commerce, they’re controlled by big companies who are fine with big government. In fact, in the last election the Chamber endorsed 23 Democrat incumbents in competitive races against free-market Republicans. The Republicans won many of those races, but would have won more if they’d not had to run against their “friends” at the Chamber.

That’s why a very small group of associations that represent small business interests are working so hard to man the front lines in Georgia. The start-up political action committee, American Family Business Alliance, of which I am a founder, is gearing up to make a major push in Georgia. Other groups like the Global Partnership Exchange and the National Federation of Christian Businesses are also working hard.

If Republicans hold the line in Georgia and keep control of the Senate, then it will be harder for progressives to push through the worst of their economic agenda. Doesn’t mean they won’t try. They’ll use executive orders by the president and governors, judicial decrees, rulings by big city mayors, and any other tools they can dig out of the shed. In the end, much will depend on the U.S. Supreme Court. Thank you Donald Trump.

With Soros and leftist progressives spending more than a $1 billion in Georgia, holding the line will require an all-hands-on-deck offense. But one thing is certain. Even if Republicans win this first battle, the war will go on. If they lose, future battles will be fought from behind enemy lines for a very long time.

Women's Suffrage: A Struggle That Continues