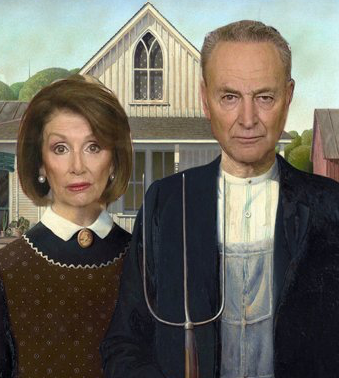 In the Longworth building, I walk among Washington’s congressional elite. A surprisingly rural smell fills the air.  My few excursions as a child into farmland has trained the memory of my nose.  It smells like….pig poop.  Perhaps, it is merely the inhabitants of this hallowed building?

There is a small, but enthusiastic crowd, gathered outside of House Speaker Nancy Pelosi’s Office.  Nancy and Chuck Schumer are dressed like Eddie Albert and Eva Gabor from the 1960’s TV Show, Green Acres.  Both are decked out in new overalls, checked shirts and are wearing matching-to-the-shirts kerchiefs.  They are positioned behind a podium that has a brightly colored blue and red sign on its front.  The words “Farming For Unity,” are on the sign. A striking picture of red and blue pigs dancing together, toasting with champagne flutes, frame the sign below the phrase.

Senate Majority Leader Mitch McConnell is in close proximity to Pelosi and Schumer. He is also dressed in accordance to the farmer theme. McConnell adds a straw hat and a piece of straw-in-the-mouth to his costume. He and Pelosi trade elbow bumps as Schumer looks on harshly, like a jealous Jethro. All three looking like the faux farmers they are. As they farm wasteful pork to the American people.

The Speaker taps on the microphone of the podium, framed by the farm boy-like, Schumer and McConnell. After saying “testing, testing 1-2-5,” Pelosi giggles and states the following.

“Good morning America, how are you?” The assembled crowd offers no response.  Pelosi continues:

“The Members of the House and the Members of the Senate have heard your cries. We have passed the most expansive COVID Relief legislation to date. Greater than what your soon to be former President could have accomplished. To the farmers, working Americans, and for oppressed transgenders everywhere we have embraced all of your needs within this one bill. Before, we go into detail about what this bill encompasses, Senator Schumer is going to delight us with a song.”

The door opens to Pelosi’s office. Inside is a three piece band dressed like the Jimi Hendrix Experience. They have more than enough room in Pelosi’s expansive office. The band goes into the famous two note vamp for Hendrix’s “Purple Haze.”

Schumer grabs the microphone and snarls the following lyrics to the tune of Purple Haze:

“Washington Acres is the place to be
Farm living is not meant for me
Politics is just my free ride
Take D.C. just give me the countryside.”

Schumer’s gig was rigid but somewhat effective. Though in Seattle, Jimi Hendrix’s corpse is spinning like a dervish in his tomb. Pelosi and McConnell are actually doing the 70’s dance, The Bump. Did they get fresh doses of Adrenochrome before the conference?  AOC is jumping up and down beside them dressed in a bright green, cheerleaders outfit.  An actual carrot hangs from each of her ears. The carrots beat an unheard rhythmic tattoo on her infinitely empty head in time with the band.

The band is rocking, with the guitar player doing a rather nifty imitation of Jimi’s classic guitar solo. I hope they are being well paid for this bizarre gig.

Schumer ends his enthusiastic performance with a mis-timed, Elvis like split. The music of the band almost hides the splitting sound of Chuck Schumer’s overalls. Two Secret Service like gentlemen do an almost perp walk with Chuck into Pelosi’s office.  The door abruptly closes. Pelosi continues:

“Thank you Senator Schumer for that inspiring performance.” As she continues to speak, her face freezes and than unfreezes, then she continues.

“We have passed a momentous bill.  A bill that will provide much needed relief to the average working American.  We have concluded that the sum of $600.00 will be adequate to the needs of our everyday people.  We have also included the following in this legacy-building bill.

A $50 million Martian welcome station in Taos, New Mexico. This station will allow us to communicate with our space brothers and sisters. No matter their language, we will be able to communicate now. Ultimately, we will keep spending until we find that elusive cognitive sentence.

Also included are some of the following:

Pelosi pauses and takes refreshment from what appears to be a carafe of blood red wine.

Her head bobbles side to side as she mumbles “You can find the total details about our 2.3 trillion dollar relief bill, for our hard working Americans, at bidenreallywon.com”

Suddenly I awake from this disturbingly bizarre dream. I look outside. The streets of my town are locked down. No one is in the streets except masked and armed patrols.

Is the nightmare continuing?

Greenfield: Protect Election Integrity - Censor Anyone Who Questions the Election