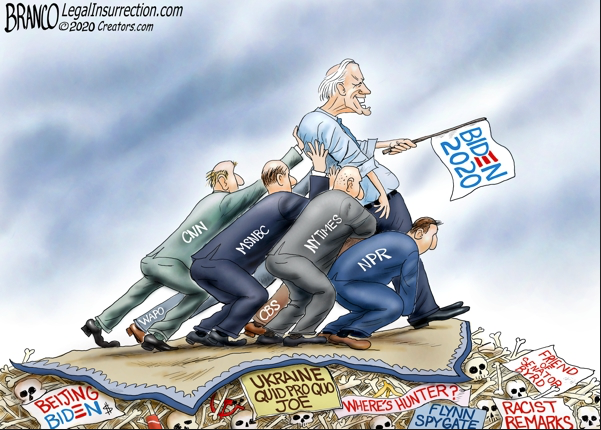 I got into political consulting before there were political consultants. Most political practitioners back then called themselves managers, strategists, or P.R. hacks. Back then, it was a profession. You’d help one candidate at a time address specific strategic needs or produce unique tactical tools. Today the political consulting business is an industry. Teams of recent college graduates stamp out change-the-name ads for hundreds of clients at a time.

I don’t know if one thing necessarily led to another, but the way the mainstream media covers politics changed first.

Seldom do big-name journalists seriously quiz a candidate they like on their plans for the future. Today, unwitting left-of-center scribes accept without comment a fellow liberal’s banal assertions that free health care, college, housing, et al are not only economic possibilities, but human rights.

Instead of issues, the mainstream media covers process. It’s much easier. When you write about the latest poll or the amount competing candidates have raised, there are seldom questions of practicality, principle, or unintended consequences. You just cover the horse race.

The difference is that in the actual sport of horse racing, you can precisely quantify what’s happening at any given moment with a decent set of binoculars and average eye sight. Not so with voter opinions and attitudes. Polls are helpful in assessing the questions and values people bring to their ballot considerations, but they’ve always been inadequate tools of political prophecy.

For political professionals, the Cook Political Report is a highly regarded, easy-user guide to competitive Congressional elections. Cook listed 27 House races as tossups this year. They weren’t. Republicans won every one of them.

Going into the election, the Real Clear Politics poll average had Biden winning by more than 7 points. That was the average. Some polls had Biden up by more than 10 points. He won by fewer than 4.

Senator Susan Collins was supposed to lose her Senate re-election in Maine. All the polls said so, not one showed her leading. She won by 9 points.

There are lots of bad outcomes when the press focuses only on process. For one thing, hysteria over perceived outcomes and and the promotion of actual policy tends to merge. Would Democrats have made so much of statehood for Washington DC and Puerto Rico if they’d known such positions would aid Republican campaigns? What about court packing, looser border security, stricter lockdowns, inhibiting energy production, free healthcare for illegals, etc, etc, etc?

Bad polls led to a belief by Democrats they could move to the far left with no political price. They did so, and it worked to further divide not just the parties, but to radicalize policy proposals as well. Those radicalized policies then further widened voter polarization.

Erroneous prognostications that are lent credibility by the supposed “science” of polling can also make a huge impact on fundraising.

More than $140 million was spent in Maine’s senate race, mostly driven by polling predictions that Senator Collins was down by 7 or more points.

In North Carolina, it was more than $240 million. More than $140 million was spent to influence the Senate race in Montana. The same for South Carolina.

Don’t liberals have better things to do with their money than throwing it down Democrat rat-holes? Apparently not.

But forget the economics and consider the impact on politics generally. Who’s going to run for public office in the future if it costs $100 million plus to be competitive? The only serious candidates will be billionaires and those with an energized following of zealots ready to back their radicalism with $100 contributions on crowd funding sites. Increasingly, that describes Democrats, and especially far left Democrats.

Republican billionaires have better things to do. Michael Bloomberg doesn’t. And radicals like Alexandria Ocasio Cortez, Ilhan Omar, and Rashida Tlaib have huge followings that are largely ignorant of the real-world results the radicals will make real should they gain power.

Democrats for Congress outspent Republicans by huge margins. Despite that, the GOP may have made as much as a 12 seat net gain. If polls had been closer, and Republican fundraising more robust, could the GOP have won a House majority? I don’t know. But I do know that groups like the U.S. Chamber of Commerce thought Democrats would strengthen their House majority in 2020 so they endorsed liberal Democrats over more pro-business Republicans – in the Chamber’s case, 23 of them.

No one really knows if better polling would have made a difference in the outcome of this year’s election. Still, it’s a valid question when Trump lost battleground states like Arizona, Wisconsin, Pennsylvania, and Georgia by razor thin margins of 1% or less. Did the certainty of Trump’s demise discourage a percentage point of his supporters from turning out? With record high turnout by both parties, it’s hard to say. The margins are too close.

What can be said is that the media’s intense focus on the process of politics, rather than the issue positions of the candidates, did not lead to a more edified voting public.

We know what flavor of milk shake Biden prefers, but do we know his true position on fracking? On free college? On looser border security? On court packing? And how will he reconcile the $9 trillion in new spending he’s proposed, with the $4 trillion in new taxes? The media wasn’t willing to hold Biden’s feet to the fire on those questions before the vote, so we’ll have to wait to find out now that the vote’s over.

That’s the cost of the media’s obsession with process over substance. We can hope that once the price for that kind of lazy journalism is finally known, voters will experience a sense of buyer’s remorse. And, even more helpful, that they’ll give Republicans a majority in the House, and a stronger Senate majority, in the 2022 elections.