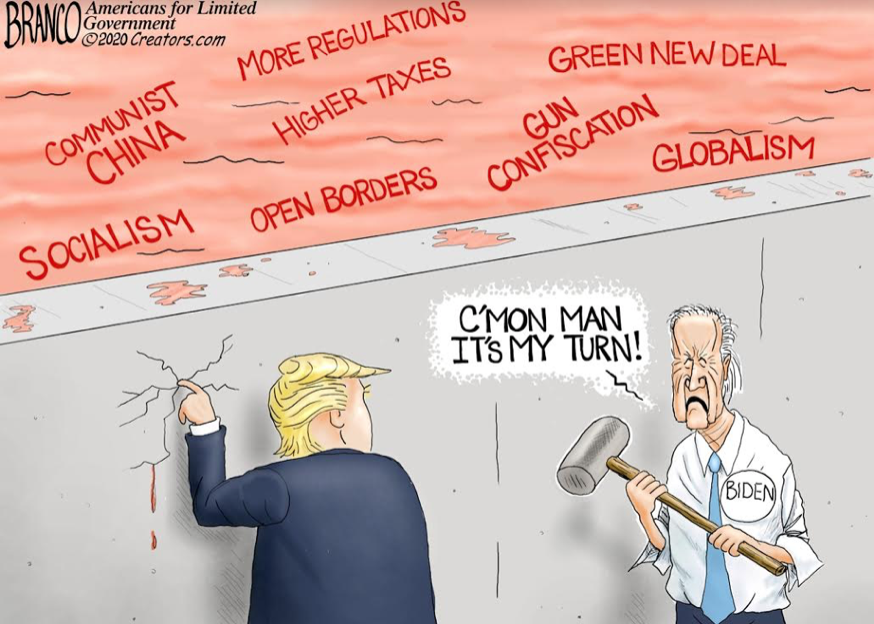 Based on his media appearances alone, Joe Biden is the stupidest person to ever enter American politics in my lifetime. As a person who is, at times, a relentless political satirist, I could never create this farce, even at my most fanciful.  On a serious note, this is a fight for the soul of America. This fight has just begun.

In Washington’s Clown World, the barking American Media and the Liberal Left are trying to convince me that Joe Biden received more votes than any President in the history of our country. The Clowns in Clown World have been selling their vision of America to a gullible populous for far too long, to the ultimate test of my patience.  And to the detriment of my beautiful vision of a more perfect America.

The Mockingbird Media is especially culpable in their failure to report on the crimes of Joe Biden. Equally guilty is that hold-the-evidence-and ignore-the crime Attorney General, Bill Barr.

You can repackage manure as candy, but it remains manure.  Biden has been repackaged too many times to count.  Like an overly reduced package of meat, Joe has a distinctly foul odor to my patriot nose.

Biden reminds me of the hollow, nodding toy dogs that my parents had in the back of their ’57 Chevy. Nodding at the movement of the car, while unable to move themselves. Joe Biden, like most bullies, is an utter coward when faced with adult challenges. He is a poltroon.  Therefore, Joe Biden is potentially going to be President Poltroon. I cannot say President and Biden in the same sentence without some sort of hilarious pause.

The abject stupidity and perpetual hypocrisy of the Left will place America in vastly dangerous waters, if allowed to have free reign.  America, as we know and love it, will not survive a Harris-Biden Presidency. Kamala Harris is Joe’s lead person. Of course Joe is not blind, merely stupid. Kamala fundamentally hates America and we, it’s fervent patriots.

Joe’s America is a masked America, a locked down America.  Joe will run America like he ran his campaign, in a basement way below the Oval Office. The country will actually be run by President Kamala, relentlessly cackling away, as she edits her enemies list.  Unity from this nefarious duo?  Not likely.

I believe Joe Biden looks at the Office of the President as one last payday. After a lifetime of criminal behavior and mediocre public service, it is time for Joe to be bribed blind. What better place to be bribed, and for us to be ripped off, but inside President Poltroon’s office? As he bows to China, bows to terrorists of every ilk, as he waits for his cookies and milk before that necessary afternoon nap. After borders erupt and anarchy reigns, President Poltroon will merely dribble into his mask

Kamala will be waiting in the wings, like a Lady Macbeth understudy, waiting for Joe to be impeached for his criminal activities and abuse of power as VP under Obama. Kamala, who slept her way into politics, will be nothing but another globalist puppet.

The recent rulings by the United States Supreme Court, on the 2020 election fraud, are about procedure. With the exception of dissenting Justices Alito and Thomas, they are ignoring the facts and the blatant evidence before them. The behavior of seven of our Supreme Court Justices, in the two recent fraud cases, has been pedantic and pathetic.

I am glad there are still pending cases to be examined in the further investigation of this massive fraud.  Without a doubt, President Trump is the only President to be the victim of direct foreign interference in an election, twice.

I refuse to accept the results of a foul and corrupt election. I know that God has got this, but he wants us to pay attention. He wants us to keep our lamps, to paraphrase Matthew, Verse One, trimmed and burning. Our freedom is at stake and Biden feels our freedom is for sale. He is mistaken.

Emery McClendon: Will Our Great Divide Condemn Our Nation?