When California store owners turned to voters to criminalize shoplifting again with Proposition 20, they never had much of a chance once Patricia Quillin threw in $2 million against them.

When Quillin paid $1 million to support Proposition 16, Asian-American opponents of the proposition, which would legalize racial discrimination against them in the form of affirmative action, protested outside her husband’s job. Her husband is the CEO of Netflix. 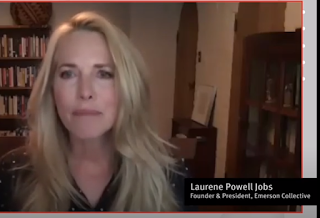 Netflix doesn’t have to worry about shoplifters and doesn’t care about the stores that do. Quillin and her husband, Reed Hastings, who are white, also don’t have to worry about college admissions. Quillin’s Meadow Fund has poured money into various forms of pro-crime advocacy and the Netflix CEO’s wife claims to be very engaged with “racial justice”.

Even though Quillin and her husband live in Santa Cruz, she poured $1.5 million into the campaign to elect George Gascon, a Soros backed pro-crime DA candidate in LA. That’s along with the $4.5 million spent on funding various destructive propositions that hurt Californians.

Patricia Quillin is part of a fundraising phenomenon: the Woke Housewives of Silicon Valley.

MacKenzie Scott, the former wife of Amazon CEO and Washington Post owner Jeff Bezos, divorced him when his cheating scandal was exposed, and cashed in with a massive settlement. That money, from making warehouse workers pee in cups, made her one of the wealthiest women in the world, and she got woke and began making everyone else get woke.

Every time another small business goes under, Scott gets richer from her Amazon shares. And that money is used to bankroll radical political agendas. Or, as Scott put it in the inevitable Medium post, “opportunities that flowed from the mere chance of skin color, sexual orientation, gender, or zip code may have yielded resources that can be powerful levers for change.”

Despite her aspirations, Scott may be a terrible writer, but she could throw $1.7 billion at radical groups, including to the Movement for Black Lives, an umbrella group that incorporates the violently racist Black Lives Matter Network linked to nationwide riots, and which supports BDS.

Scott was funding the racist movement destroying small businesses and making her richer.

Like Quillin, Scott is insulated from the negative consequences of her political activism, but not the positive ones. The destruction of small businesses has little impact on a streaming platform like Netflix and is a net benefit for Scott and her Amazon stock. Every time another store went up in flames, her ex-husband’s empire expanded leaving her with more money and power.

The Woke Housewives of Silicon Valley, whether or not they actually live there, have amassed enormous wealth with little responsibility or understanding of how the people they hurt live.

Scott has confined her $1.7 payout to identity politics and other causes that don’t touch on the sources of her wealth. In all her vast scope of institutional giveaways covering everything from lesbian rights to illegal migrants to Indian organizations, she isn’t funding any kind of workers’ rights group whose advocacy would affect Amazon, its share price, and her net worth.

Another of the biggest woke housewives of Silicon Valley predates digital parvenus like Netflix and Amazon. Laurene Powell, the widow of Apple boss Steve Jobs, may not have as much money to burn as Scott, but her Emerson Collective has $1.8 billion in assets and a woke creed.

“I am doing this in honor of his work,” Powell claimed of her husband, but Jobs had no interest or involvement in politics. When Powell urged Jobs to meet Obama, he showed little interest, resulting in a five-day protocol standoff. The actual meeting led to Jobs blasting Obama over regulations and teachers’ unions, and telling him, “You’re headed for a one-term presidency.”

Powell isn’t spending her husband’s creative capital for him, but for her own lefty politics. 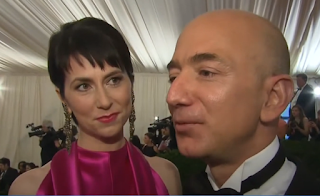 After her husband’s death, who had reportedly been a Reagan voter, Powell brought in a gaggle of Obama and Clinton operatives and staffers, and began building a radical political machine, pouring millions into Democrat political operations like Emerge and Priorities USA.

She’s a major funder of the pro-crime Marshall Project and has written editorials advocating for illegal migrants who, much like Apple’s China production, deprive Americans of jobs. One Emerson Collective fellow advocates for freeing criminals to “protect” them from the pandemic: a policy that has resulted in a horrifying year of nationwide murders, rapes, and robberies.

None of this is likely to affect Powell, who bought a 19th century mansion for $16 million in San Francisco’s Russian Hill after her $60 million Paradise Cove Malibu estate burned, and had another mansion under construction in Silicon Valley. Cynics might speculate that the illegal aliens on whose behalf she spends so much time advocating might be helping lower costs.

Powell’s big corner of the sky is media, buying The Atlantic, and funding lefty publications like Mother Jones. Her Emerson Collective, a “social change organization” invests in Axios, and funds the Now This spam factory whose lefty agitprop is ubiquitous on social media. Emerson backs the Texas Observer, a lefty non-profit that advocates for illegals as a “newspaper”.

And she appears to have gotten even more explicitly into the fake news game by channeling money into ACRONYM, whose fake news site operation is controversial even on the Left for its sleazy strategy of creating lefty sites that pretend to be local news organizations.

While Quillin, Scott, and Powell are billionaires, not all the woke housewives of Silicon Valley can command billions. Some, like Karla Jurvetson, are mere millionaires.

When Democrat dot com donor Steve Jurvetson was caught up in rumors about extramarital affairs and sexual harassment, Karla dumped the Tesla board member and Theranos backer and took her money to militant ferminist organizations and the Elizabeth Warren campaign.

In 2018, Karla made it to 11 on the list of top federal donors, one space ahead of Scott’s ex, Jeff Bezos. She donated $5.4 million in Baidu stock, a Chinese company entangled with the Communist Party, to Emily’s List. Then she cut a $100,000 check to buy Elizabeth Warren the DNC voter file (split two ways to bypass FEC limits) and keep her message of socialism alive.

Karla ended up funding Warren’s Super PAC to the tune of $14.6 million. (You may recall that Warren hates Super PACs, but that’s just a reminder not to believe a single word she says.)

While funding Warren was a waste of all that Silicon Valley wealth, Karla invested over $1 million into Stacey Abrams’ Fair Fight PAC voter fraud machine, which paid off in Georgia. And Karla, as Stacey’s biggest donor, may have gotten more done than Scott, Powell, or Quillin.

Karla Jurvetson lives in Silicon Valley, not Georgia, but the one constant of the Woke Housewives of Silicon Valley is that they use their massive wealth to wreck other places, states they don’t live in and communities they don’t visit, to scold them for their political incorrectness.

The world, they think, ought to operate according to their politics and propriety, and they spend their money bullying, bribing, and funding the identity politics that play on their emotions.

Wokeness is a movement of white women who lack any sense of meaning or purpose. Devoid of religion and placing little value on family connections, they derive their worldview from the substitute religiosity of the old Marxist tropes about the oppressed and the oppressors, alternately thrilling and fulminating over the plight of illegal migrants and criminals, bleeding with empathy for transgender illegal alien serial rapists and Black Lives Matter rioters.

Meanwhile they carefully ignore the moral questions raised by the sources of their wealth.

Interviewers know to ask MacKenzie Scott about how hard it is to be a black man in America, a subject that she knows as much about as the topography of Mars, but not what it feels like to be an Amazon warehouse worker peeing into a cup to make her another twenty billion dollars.

They’ll ask Patricia Quillin about the same subject, a topic she knows even less about, but not about Netflix’s promotion of teenage suicide and pedophilia. And the resulting teen suicides.

Laurene Powell will be asked about the plight of illegal aliens, not of the employees at the companies that make Apple products committing suicide in droves.

Wokeness forgives a multitude of sins. Throw billions at race rioters and criminals, at illegal aliens and random identity politics causes, and you never have to look too hard in the mirror.

Unlike real religion, wokeness permits the lefty super-rich to evade a moral reckoning with their sins, using the rest of the country as scapegoats, punishing Asian-American students, shop owners, families living on the border or in ghettos, workers in the Rust Belt, for their own crimes.

The Woke Housewives of Silicon Valley are wrecking America in between chardonnay breaks. But there isn’t enough chardonnay or enough billions to escape the moral reckoning of the wreckage.