The Jewish holiday of Chanukah has two major symbols: the menorah and the dreidel.

The menorah, a candelabra with eight branches, and one light above, memorializes the liberation of the Temple from the religious persecution of Antiochus IV Epiphanes, the Syrian-Greek ruler who had outlawed Judaism, and the other a spinning top recollects how Jewish children learning the word of G-d in the banned ‘hedge schools’ of ancient Israel would take out tops and pretend to be playing games when Antiochus’ inspectors arrived.

American Jewish children had lit menorahs and spun their dreidels for generations without imagining that an Antiochus would arise in America. Let alone that he would arise in New York. 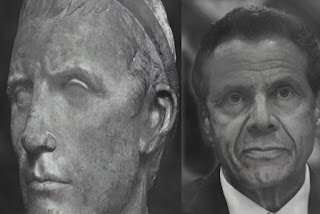 In 2020, Chanukah came early when another abominable tyrant, fresh from killing 11,000 nursing home residents by forcing facilities to accept infected coronavirus patients, decided to adopt the medieval habit of blaming the virus on Orthodox Jews in Brooklyn. A swarm of inspectors from every department were sent out to schools and then to the hidden schools.

And in 21st century America, children huddled in basements, afraid to make a noise, and then, if Cuomo’s men found them, were ready to claim that they weren’t in school, just playing games.

A month before Chanukah and Christmas, the Supreme Court’s conservative justices, three of them appointed by President Trump, delivered a Christmas present in Roman Catholic Diocese v. Cuomo and a Chanukah present in Agudath Israel of America v. Cuomo. Like his Syrian-Greek predecessor, Cuomo furiously raged at the restraint imposed on his power.

Cuomo’s hatred for religion is driven by the same mad idolization that had led Antiochus to take Epiphanes, ‘the visible god’, as part of his name. Antiochus had put idols in the temple, Cuomo had placed his self-idolizing coronavirus memoir into the windows of every bookstore.

That egotistical hatred of a G-d that isn’t a culture war idol, that isn’t named Cuomo, Obama, or Ginsberg, is why the battle for religious freedom is far from over in this longest of Chanukahs.

When the pandemic lockdowns arrived, I was still completing the mourning year for my mother. In Jewish tradition, losing a parent ushers in a year of grief. I did not listen to music or attend parties, and I spent an hour each day traveling to synagogue to lead prayer services in her memory. The recital of the Kaddish, praising G-d, is said to uplift the souls of the deceased.

And then all the synagogues were forced to close.

In a dark time when the New York Post dispatches undercover investigators to do Cuomo’s work for him and spy on Jewish weddings, when the media breathlessly digs up tales of secret prayer gatherings (“Post the names and addresses, expose them,” a quote in one Los Angeles article read, “If you have information and say nothing then you could be endangering lives”), few dare to speak of the underground prayer railroad. But what more needs to be said of the state of 21st century America than that there were underground churches and synagogues.

My mother was born in the Soviet Union. As a teenager, she had terrified her parents, who had witnessed their family members being imprisoned and executed, by rejecting Communism. After being expelled from school and barred from higher education, she had joined the Jewish underground networks that had gathered together in homes to sing Jewish songs, to illegally copy Hebrew dictionaries, commemorate the Holocaust, and covertly bake Matza for Passover.

Americans tend to think of such a loss of freedom as an alien and unimaginable state. This year taught us how thin the line that divides us from the age of Antiochus or the age of Stalin really is.

For now, the synagogues are open again and many of the religious schools in Los Angeles are teaching students though some, in an echo of the dreidel, are operating officially as day camps.

The Supreme Court decision that halted some of the declarations by the modern Antiochus and his Democrat peers that religion, unlike cannabis dispensaries and film shoots, is non-essential, would not have happened if President Trump and Senate Republicans hadn’t put Justice Amy Coney Barrett on the Supreme Court. When religious freedom hangs by the fraying thread of a single justice, even as Democrats plot to seize Georgia Senate seats and pack the court, then it’s hardly there even if for the moment some of the worst Democrat depredations were halted.

Tikkunolamism is the modern Hellenism, a militant pagan secularism that idolizes utopian culture heroes while disdaining the intangible idea of the holy presence of an unseen G-d.

Antiochus placed idols in the temple and ordered that pigs be sacrificed because he only understood religion as power. To defile something sacred was to wield power over it. In their culture wars, leftists follow the same obsessive pattern of degradation, using elephant dung and urine on Christian symbols, draping naked women in the symbols of the Jewish faith, ridiculing Chanukah in the pages of the New York Times, and making the menorah into a mockery.

And when that doesn’t work, there’s always compulsion under the guise of a greater good.

Antiochus had taken the surname Epiphanes, meaning ‘the visible god’, to mock the invisible G-d. But the power of G-d had made a mockery of his armies, his blasphemies, and his rule.

The power of Chanukah, and of faith, is in the unseen, from the force that caused a single flask of oil to burn in the Menorah for eight days, to the covert Torah being studied by the children as they pretended to spin a top, to the hidden omnipotent might of an unseen G-d.

And this year, the suppression of public prayers made us appreciate them all the more.

Out of the dark times, we experienced the smallest taste of what our ancestors had endured to keep the faith, and through that renewed the meaning to be found in holidays like Chanukah.

Religious people respond to religious persecution by seeing the unseen. It is the unseen that is the source of faith in a world that places its confidence in material power above all else. And the insights and the might of the unseen make a mockery of the worst of that blasphemous power.

Another Chanukah arrives in a world in which Antiochus can be found in Albany, New York, in which the synagogues and schools open today might be forced to be shut tomorrow, and in which the ideological faction that makes a point of defiling Chanukah along with most religion, which would close most houses of worship if it could, plots to lay claim to the White House.

When George Washington visited the family of a Jewish officer, a story relates that he told them of first encountering the Menorah in the hands of a Jewish soldier at Valley Forge.

“Perhaps we are not as lost as our enemies would have us believe. I rejoice in the Maccabees’ success, though it is long past,” Washington had supposedly said. “It pleases me to think that miracles still happen.”

Even in the darkest period of a dark year, we are not as lost as our enemies would have us believe. Neither the trials nor the triumphs of faith are long past. And miracles still happen.

A Briton's Commentary on the 2020 Presidential Election