“We know people may have made mistakes over the Thanksgiving time period,” Dr. Birx scolded the nation on CBS’ Face the Nation. “If you’re young and you gathered, you need to be tested about five to 10 days later. But you need to assume that you’re infected.”

Then Birx made her own “mistake”. 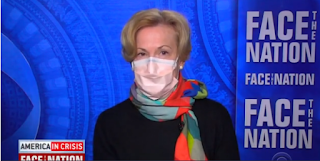 After urging people not to “go near your grandparents and aunts and others”, and to stick to “your immediate household”, she headed off to her vacation home on a Delaware island along with members of a multigenerational family that encompasses three households across three states.

Americans have been told to follow the science, when they ought to be following the scientists.

Neil Ferguson, the British epidemiologist whose Imperial College model led to the UK lockdown, was forced to step down after having an affair with a married left-wing activist in violation of the lockdown guidelines, not to mention the currently much less important Judeo-Christian morality.

Ferguson claimed that he thought was immune from the virus.

And Dr. Fauci, after throwing out a pitch at a game between the Yankees and the Nationals, was photographed hanging out, mask lowered, in the stands next to a friend.

Fauci’s defense was the familiar one offered by Birx and Ferguson.

“I was literally negative for COVID the day before,” he snidely replied.

Ferguson had argued that he met up with his lover after testing positive and isolating for two weeks. Birx claimed that she had stayed safe by getting tested on a regular basis.

Easy access to tests, especially early on in the pandemic, was a privilege that not that many had. Elites saying that they could do as they pleased if they had been tested foreshadowed the vaccine debates in which some people will be able to live their lives freely while others will not.

But coronavirus tests are not bulletproof, as Fauci and Birx, better than anyone, ought to know. It’s possible to test as negative and still have the virus. And that’s especially true within the first few days of being infected. Fauci authoritatively declaring that it was fine not to wear a mask because he had tested as negative the day before was either really stupid or really dishonest.

Politicians have spent the pandemic telling us that we have to “follow the science”, but they’ve been following the scientists. And it might be time that the rest of the country did the same.

Birx, Fauci, and Ferguson calculated their own risks, and decided that their personal priorities, winterizing a house before a sale and spending time with family, sipping some water while hanging out with a friend at a baseball game, or having an illicit affair were worth the risk.

Americans, Britons, and the people of the rest of the world ought to be able to do the same.

Managing the risks of viral infections, unlike researching the coronavirus, is not an esoteric field of study. It does not require a PhD or twenty years of work talking down to politicians. And having the degree doesn’t mean making good decisions. Just ask Neil Ferguson.

The essence of a free country is that people are able to make their own decisions. Everything else is boilerplate. It doesn’t matter how much governments pontificate about human rights, the rights of man, and the legacy of the Magna Carta and the Constitution, if they don’t actually let people make the most basic decisions about how to lead their own lives on an everyday basis.

The pandemic lockdowns didn’t come out of nowhere.

Long before the sad grim farce of loudspeakers blaring, “We’re All In This Together” to the proles while the elites headed off to their vacation homes and French Laundry dinners, the business of public health was about closely controlling what the masses did with their lives.

The war against smoking, then fat, salt, and soda, were all based on the unspoken assumption that people were too stupid to behave responsibly and someone had to do it for them. The CDC was utterly inept at managing pandemics, but it spent much of its budget fighting obesity.

The critical difference between fighting obesity and a pandemic is that the former is a behavior while the latter is a virus. Fighting a virus requires actual knowledge, skill, and ability, but fighting a behavior just means spending a lot of time scolding people and penalizing them.

Controlling a virus is hard, but controlling people seems a lot easier.

Faced with a deadly virus, the people whom the taxpayers had been paying a small fortune so that they can have houses in three different states didn’t fight the virus, they fought behaviors.

When Democrats attack President Trump’s handling of the pandemic, they aren’t criticising the amazing dispatch with which Operation Warp Speed produced vaccines, but his refusal to join them in scolding Americans for not wearing masks and for spending time with their families.

President Trump is being blamed for not being a Newsom, a Whitmer, or a Cuomo: a hypocrite.

Democrats aren’t impressed by the vaccines because for all their talk of following the science, the only sciences and diseases they’re interested in are the social kind. Medical science developing vaccines at rapid speed doesn’t impress them. Getting people to obey does.

The Trump administration treated the pandemic as a medical problem while the Democrats and their media treated it as a behavioral problem. That’s why they’re still obsessed with getting everyone to wear masks long after the vaccine is here. That’s not a triumph for medical science, but it is a tremendous victory for the social sciences of any aspiring Communist dictatorship.

The very term ‘public health’ is revealing of this deeply distorted set of political priorities.

The scientific universe with its infinity of galaxies and microbes may appear to be a cold and inhuman place, but it has the virtue of offering perspective, while the pseudoscientific echo chamber of social science assumes that the universe revolves around human social inequities. Its practitioners spout jargon, but are unequipped to tackle the problems of objective reality.

The problem is never objective reality, whether it’s the finite numbers of economics or the biology of a pandemic, instead the problem is always getting people to listen to their betters.

Einstein didn’t believe he was immune from the laws of the universe, but the contemporary experts in the public eye tend to see social problems rather than objective universal laws. And they are convinced that they are above those social problems on account of their superiority and therefore they can take risks that the rest of society is too ignorant to properly calculate.

Public health’s contempt for the good sense of the public led to this totalitarian two tier system.

A Ferguson, a Fauci, or a Birx should be able calculate their risk of having a fling, flinging a ball, or vacationing after Thanksgiving, like the rest of the country. All Americans should be able to gauge the risk of spending time with loved ones, of having a sandwich and a soda, of exercising or not, and of living their lives without the constant scolding of hypocritical public health experts.

When it comes to money, love, and other people, we are all flawed human beings. A free society recognizes this basic human fallibility. Only a totalitarian system insists on denying it.

Every American has the same right to live their lives that Fauci and Birx do. We won that right in the 18th century. It would be a great tragedy if we were to lose it in the 21st century.