“As Donald Trump returns to Cincinnati today, I think it’s important to say in my role as an elected leader for the city that he does not represent our values – not anywhere close. Indeed, he undermines them daily,” Councilman P.G. Sittenfeld tweeted two years ago. 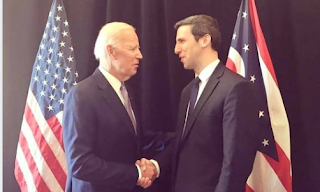 Now, P.G. Sittenfeld, the leftist mayoral candidate, whose Senate bid had been funded by Obama and Biden backers, was arrested on corruption charges. In some places that might be a shameful distinction, but in Cincinnati it just means a third of the city council has been busted.

Or 40% of the ‘Gang of Five’, the five Democrats who had illegally colluded on city business via text messaging resulting in $101,000 in fines and attorney fees to be paid for by taxpayers. When Democrat politicians violate the law, it’s the taxpayers who still end up on the hook.

During his Senate primary bid, a PAC known as New Leadership for Ohio was formed to support Sittenfeld. The PAC raised and spent $788,104 in 2016. Questions were raised at the time, why an English literature professor at the University of Cincinnati donated $275,000 to it. While that was an earlier election, Sittenfeld’s current troubles revolve around a corrupt PAC.

Sittenfeld’s indictment states that “Sittenfeld corruptly solicited and received payments to the PAC, controlled by Sittenfeld, all in connection with Project 1.” The PAC is not named in the indictment, but Sittenfeld had allegedly described it as a PAC, “that my name is not connected to… basically no one knows about it… my name and no filings, and no paperwork.”

But he promised that he could “deliver the votes” in exchange for contributions to the PAC, and showed voting data to prove that bribers were “making good bets and good investments.”

And he was also running for mayor on a platform of equity and justice.

How much did it cost to buy into what Sittenfeld called a “winning endeavor”? $40,000.

Sittenfeld joins Councilwoman Tamaya Dennard, who pled guilty to wire fraud, after charges of bribery and attempted extortion were dropped, but vowed to continue fighting for racial justice.

Dennard, who had complained about “classism” within the black community, was arrested at a Starbucks before she could lead an “equity” meeting. Dennard had gotten started as an activist with Sittenfeld’s campaign, then worked on his staff, including as political director of his Senate campaign, before running for office while wearing an “unbossed and unbought” button.

The FBI accused her of taking $15,000 from a developer in exchange for favors.

“I could really use your help. It’s kind of urgent to get it today. Happy to help you. But need yours too,” the unbought and unbossed Dennard allegedly texted.

As a member of the Gang of Five, Dennard was also sued by Retired Assistant Police Chief David Bailey for calling him a racist. Dennard, who had attended Black Lives Matter protests and thrown around terms like ‘intersectionality’, had been one of BLM’s backers on the council.

“Since I filed it, Ms. Dennard has been indicted by a grand jury on public corruption charges related to her attempt to sell her council vote for money,” the former cop noted. “I have come to the conclusion that her words no longer mean anything in the public arena.”

The third of the trio, Jeff Pastor, is a Republican, by party identification, who had tried Islam, and then Judaism, before announcing that he was a “polyamorous atheist”. Pastor, a supporter of Black Lives Matter congratulated Biden on his “victory” shortly before his arrest by the FBI.

Some of the $55,000 that Pastor allegedly accepted, including bags of cash, was laundered through a non-profit, Ummah Strength. Ummah, an Islamic term, was in this case apparently used as the basis for a fitness non-profit and development company.

All the scandalous details aside, a third of the Cincinnati City Council has been busted on fairly similar charges and similar crimes in under two years. What does that say about Cincinnati?

Cincinnati’s city council is dominated by Democrats. David DeVillers, a Trump pick for U.S. Attorney for the Southern District of Ohio, wasted little time in going after crooked politicians since taking office in 2019. After taking down Dennard, he brought down Pastor, and now Sittenfeld, accounting for an incredible third of the city’s town council.

“The fact that we had two in one year, that tells you all you need to know,” DeVillers had said about the city’s culture of corruption. “We’re going to prosecute those cases. Our goal is to make people nervous and stop them from doing this.”

The Democrat majority on the council has to be getting nervous every time they take a bribe.

In Cincinnati, we welcome and actively want immigrants and refugees to live here. In Cincinnati, we believe climate change is real,” Sittenfeld had ranted before President Trump’s visit. “In Cincinnati, we affirm that Black Lives Matter.” But the leftist Democrat, who is running for mayor and was once touted for the Senate by Obama allies, forgot the most important thing in Cincinnati.

In Cincinnati, thanks to President Trump, crooked politicians who take bribes now get busted.

DeVillers had advised the Iraqi High Tribunal in its trial of Saddam Hussein, so he’s equipped to tackle political corruption. And his approach of aggressively pursuing public corruption cases has unquestionably paid off. And it’s in keeping with President Trump’s promise to clean up the Democrat machine. Too many Americans have been abandoned in corrupt cities controlled by crooked politicians who are out for themselves and face little competition and less oversight.

“I really think we did a disservice by not being aggressive,” DeVillers told The Cincinnati Enquirer. “The idea of taking shots is what we need to do in cases like that. We do it in murder cases. We do it in drug cases. We should do it in public corruption cases.”

The Great "Better Than Nothing" Lie