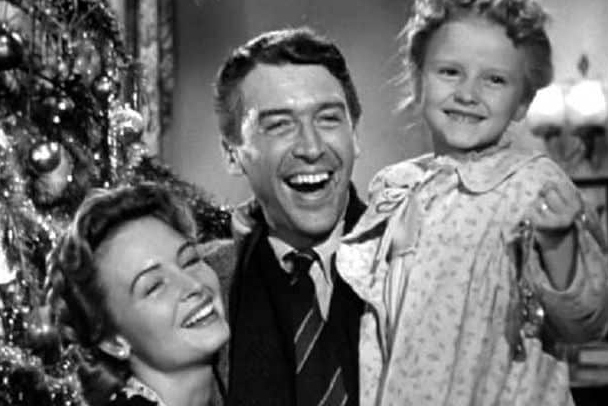 Right now we are getting a wonderful plethora of Christmas films on TV and it is also a good time to pull out the DVDs we have of our favorite Christmas films. There are so many to pick from and there was one DVD my wife Carolyn and I had not seen in years. Too long I realize now.

The film is It’s A Wonderful Life and seeing it again made us realize what makes this one so different from all the others. Unlike all the sweet Christmas family and comedy films out now, this one has deep religious messages, particularly about the power of prayer. Direct prayer to God in a time of need is the main objective of the film whether that was intended by genius film maker Frank Capra or not.

The film unlike any other film we have ever seen begins with a series of prayers from different people for George Bailey in the town of Bedford Falls. The prayer is heard in Heaven and an angel named Clarence, who has tried to earn his wings for 200 years, is sent to Earth to help George.

Clarence has to review the life of George Bailey to understand the problem and we start out with George as a boy making sacrifices to help others. As a young man he has ambitions to travel and to make a fortune which he has the brains to do. Starring Jimmy Stewart as George, we see him frustrated many times as he finds continual needs for his help, and he must to stay home, and run a business, Bailey Building and Loan. The highlight is his courtship and marriage to Mary played by Donna Reed and their small children.

Trouble comes when right before Christmas money disappears and George is accused of embezzlement and is on the verge of losing everything. Believing his life has had no significance George is on the verge of suicide when Clarence comes on the scene. George has only one wish, never to have been born. After thinking about it Clarence agrees and George finds himself transported to an alternate world.

Next to prayer the second biggest message is we never know what influence we may have on others by things we do or say. George finds himself in a town very different from what he recalls and people he knew have either died or had terrible things happen to them. Things that would have been reversed had George been on the scene. George then prays for redemption and Clarence restores him to life and the film ends with a series of wonderful climaxes.

Once It’s A Wonderful Life came out it had good reviews, but it was a poor money maker. However, as the years went by the film has gained outstanding success and has been rated as one of the top motion pictures made. Certainly by many it is considered the top Christmas movie. 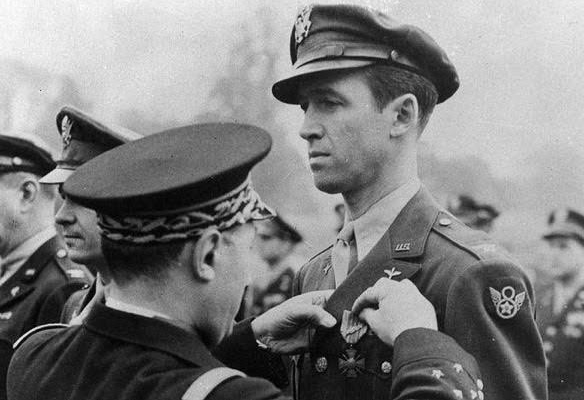 There is more about this film that in many ways was a miracle in its making. The salvation of Jimmy Stewart.  Jimmy Stewart had a brilliant career in the thirties, even winning the Academy Award for best actor in The Philadelphia Story in 1940. Then came World War Two and Jimmy was a true patriot. Having some training in flight he enlisted and became a navigator for the Army Air Corps. At first the army tried make him do training films because of his recognition as a Hollywood star. He soon convinced them that he wanted to fly missions and he did more than twenty over Germany under dangerous conditions.

Jimmy Stewart by the war’s end was heavily decorated and he assumed he could resume his film career. However, he had what we call PTSD today and had lost weight to the point that he looked emaciated. It would seem his film career was over and then along came It’s A Wonderful Life. Jimmy admitted the film had a major influence on him, especially when he prayed as he contemplated suicide. “I broke down sobbing,”  Jimmy admitted. “This was not planned at all, but the power of that prayer, the realization that our Father in heaven is there to help the hopeless, had reduced me to tears.” And that continued the rest of his life as he went on to make many great films and as a Christian and conservative Republican to work for issues he believed in.

This writer felt a special bond with Jimmy Stewart who I considered a “Teaching Partner.” His 1939 film Mr. Smith Goes To Washington is one I used every year in my government classes as it covered the idealism of a young senator facing deep corruption in government that threatens to destroy him. The villains who led the party resembled the very type of corruption we are seeing today in the Democratic Party. It should be mentioned that the film is partly based on a true story and Smith uses a tool to succeed that Democrats in the US Senate today want to do away with, The Filibuster. My students were always deeply moved by the film and it would be well worth running on TV today.

I wrote Jimmy Stewart about this and he replied that he was very pleased his work could still influence young people in a positive way. The spirit of George Bailey lived on with him. We need more people like him in government and the entertainment media as well.

Chatter from China: No, Trump Will Not Declare Martial Law