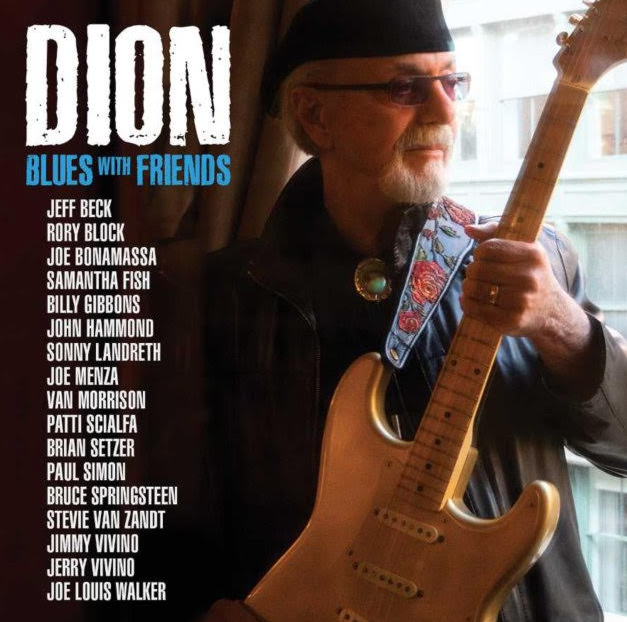 Dion Dimucci, better known as Dion, is a fascinating figure in American music.  His 1950/60’s work with Dion & the Belmonts, among others, created such classics as “The Wanderer, Runaround Sue, I Wonder Why, and A Teenager in Love.”

Yet, Dion’s artistic range is broader than that of a former teen idol.  He was in the forefront of early Rock and Roll; Especially  when you consider his associations with seminal artists such as Buddy Holly and Sam Cooke.  Dion was a featured artist on the 1959 Winter Dance Party which also featured Holly, JP Richardson aka “The Big Bopper” and Richie Valens, among others.  In a hastily arranged plane ride, as a break from a no-heat winter tour bus, Holly, Richardson and Valens lost their lives in a plane crash near Clear Lake, Iowa on February 3, 1959.

Along with that first burst of Rock and Roll, Doo-Wop, R&B, Hank Williams’ Country and, pertinent to this article, Deep Blues, all, have left their rhythmic blueprint on Dion’s musical soul.

He was born Dion Dimucci, on July 18, 1939, in the Bronx, New York.  By the time he was a teenager, he was singing Doo-Wop harmonies with friends on New York City street corners.  Something about the human voice against a brick wall that snaps the notes into a crisp focus.  A lot of great vocals created on those corners.

In 1957, Dion auditioned for Bob and Gene Swartz for their short-lived local label, Mohawk Records. They teamed him with a vocal backing group called The Timberlanes.  The resulting song, “The Chosen Few, was a regional hit by Dion and the Timberlanes, enabling Dion the opportunity to perform the song on “American Bandstand.”

Dion didn’t like the slightly “white bread” approach of the Timberlanes.  He decided to return to his old neighborhood and recruited three singers, Carlos Mastrangelo, Fred Milano and Angelo D’Aleo. Thus, Dion and the Belmonts were born.

The group’s breakthrough hit was 1958’s, “I Wonder Why,” released on the Swartz’s new label, Laurie records.  This was followed by “A Teenager in Love and Where or When.”  By 1959, there was a push for Dion to record solo.

By the end of 1960, Dion had released his first solo album, “Alone With Dion,”which had the hit “Lonely Teenager.”  During this period Dion  had some of his biggest hits with “Runaround Sue and The Wanderer.”

By the end of 1962, Dion became the first Rock and Roll artist signed to Columbia records. Legendary Columbia Producer, John Hammond Sr, became a mentor to Dion.  He exposed Dion to some of the great Delta Bluesmen, like Robert Johnson, further deepening his appreciation of the Blues form.  His first hit with Columbia was a version of The Drifters classic, “Ruby Baby.”

During his period with Columbia, Dion had a tendency to include classic Blues songs, by artists such as Muddy Waters, Sleepy John Estes, Willie Dixon and more.  Dion has stated, on more than one occasion, that The Wanderer was his first attempt at writing a solid Blues.

Regrettably, Dion’s tenure with Columbia was marred by his struggles with heroin addiction.  Yet, his passion for the Blues continued and was stunningly featured in some of his Columbia releases produced by famed Bob Dylan Producer, Tom Wilson.

In April 1968, Dion had a powerful religious conversion. This helped lead him to finally getting clean from the drug habit that had chained him since his teenage days.  He detailed that change in a powerful 1970, original song, “Your Own Backyard.” During this period, after leaving Columbia, Dion approached Laurie records for a new contract.  They agreed, but asked that he record a song by songwriter Dick Holler titled, “Abraham, Martin and John.”  The song was a huge hit, going to number four in America and number one in Canada.  This tribute to Lincoln, John Kennedy and Martin Luther King resuscitated Dion’s career

From 1969 on, Dion’s music has become more contemplative and mature.  He has recorded for a variety of labels, including Warner Brothers, and has worked with producers such as Phil Spector.  Spector produced a classic, unjustly overlooked album for Dion titled, “Born to Be With You,” in 1975.  This album is regarded as a classic by artists as diverse as Pete Townsend and Jarvis Cocker.

In 1979, Dion became a born again Christian leading to a set of  five remarkable albums for the Day Spring label that communicated his profound Christian faith. He recorded no secular music from 1979 through 1987, eventually returning to the Catholicism of his youth.

In 1987, Dion did a concert of his old hits at Radio City Music Hall that marked a return to his Rock and Roll roots, celebrating both his past and his future.  During this time he did a benefit concert for Homeless Medical Relief. At that benefit, Dion shared the stage with Bruce Springsteen, Lou Reed and Paul Simon, all of whom declared him to be a major influence.

In 1988, he released his biography, “The Wanderer,” co-authored by Davin Seay.  An excellent book.

Recent years have lead Dion to embrace the Blues with a more defined fervor. Albums  such “Bronx in Blue, Son of Skip James and Tank Full of Blues, “ have firmly articulated his passion for the Blues.

Most Blues All Star records feature songs by traditional artists such as Muddy Water or Howlin’ Wolf. What makes this album different is that all the songs were written by Dion or in collaboration with other writers. The collaborations are mainly with writer Mike Aquilina, who is a popular author working in the area of church history.

Blues With Friends debuted at Number one on the Billboard Blues charts and Billboard considers it to be the best Blues album of 2020.  The lyrics have a passionate honesty, the guest performances are stunning and at 81, Dion has never sung better.

Dion’s performance with Van Morrison and Joe Louis Walker on“I Got Nothing,” is stunning. I Got Nothing could be the theme song for 2020 and reflects our shared troubles in this nation.

My favorite song is “What If I Told You,” framed by the great guitar work of Samantha Fish.  Yet, not all of the songs fall into the traditional Blues bag. The song, with the legendary Jeff Beck on guitar, “Can’t Start Over Again,” is a truly heartbreaking ballad.  Also of note, outside the Blues frame, is the “Song For Sam Cooke (Here in America),” which features Paul Simon on harmony vocals.  This is a truly heart tugging reminiscence of Dion’s friendship with R&B legend, Sam Cooke.

There is no filler on this album. Every song is well performed and well written.  This album has not left my  playlist since it’s June release.  Additionally, Bob Dylan wrote some very astute liner notes for this album. If you are a Dion fan, a Blues fan or are just looking for that special gift, “Blues With Friends,” is for you.

Greenfield: A Woke Museum in an Illiterate City Goes for Broke

Emery McClendon: Will Our Great Divide Condemn Our Nation?