There may be claims that the ‘blue wave’ is intact in America and that Biden has won the election. But we’re still far from any phase of finalization – it is premature to clamor victoriously if there remains numerous legal and popular challenges facing the results.

What does the future hold for President Donald J. Trump? The hope that President Trump can re-claim his victory in the 2020 election is now looking more likely as the days go by. His legal team, led by attorney Rudy Giuliani, has filed lawsuits in Pennsylvania, Michigan, Georgia, Arizona, and Nevada aimed at undoing what the Democrats have done as promised by the scandalous claims of massive voter fraud. His challenge in 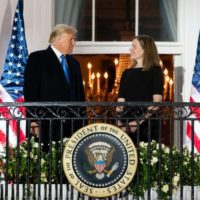 Pennsylvania specifically is that the state Supreme Court acted unconstitutionally. This challenge will likely end up before the U.S. Supreme Court, a court that is now decidedly in President Trump’s favor with the confirmation of Justice Amy Coney Barrett a little over a month ago. But even with a legal victory in Pennsylvania, will it be enough to overturn the results of the election? Chances are that the answer now will be a resounding YES.

I believe as we gather testimony from people overseeing the ballots, voters providing testimony that their ballots were missing, tampered with, or videos from cameras inside Georgia filming ballots from under tables after closing and being counted.  Even carpetbaggers from states outside of Georgia that were paid to deliver ballots or encouraging people to move in order to file their votes. Voting in Georgia, Nevada, Arizona, Michigan, and Pennsylvania has been determined that voter massive fraud is alive and doing quite well.

Reminiscent of the year 2000,  when Bush and Gore battled in Florida over a hanging chad? After an intense recount process and the United States Supreme Court’s decision in Bush v. Gore, Bush won Florida’s electoral votes by a margin of only 537 votes out of almost six million casts and, as a result, became the president-elect.

In an odd coincidence, Supreme Court Justices Kavanaugh worked on that recount litigations in Florida in 2000, on the Republican side, as a young lawyer, so did Justice Barrett and Chief Justice Roberts. Republicans control the state legislatures in many if not all of the major battleground states, including Michigan, Wisconsin, Florida, Pennsylvania, Arizona, Georgia, Ohio, Iowa, Texas, and North Carolina.

In a stunning event on Friday, November 20th the Supreme Court of the United States (SCOTUS)  had repositioned and redistricted Justice Barrett, Justice Thomas, Justice Kavanaugh, and Justice Gorsuch –  ALL were repositioned to battleground states.

President Trump has not (and will not) concede because he has reason to believe a second consecutive term is very possible. There are pivotal seats where he’s trailing by a small margin of a mere thousand in terms of the number of votes. If Biden’s campaign, in this ‘celebrated victory’ of theirs, is stating that they’ve just demonstrated what a landslide win looks like, the numbers clearly go against their apparent political gospels.

So let’s talk about “Trumpism”, regardless of what lies ahead of the legal challenges and future as a whole, is here to stay. The unparallel support that the 45th President of the United States enjoys among commoners and his party alike, also suggests that if he were to step down because of unfavorable verdicts at court, there is an expansive political career strewn ahead. He will be back and with perhaps greater fervor, determination, and commitment than ever seen before in any political party with any political candidate. President Trump is a force to be reckoned with.

Evidently, there is a question about whether Trump can still win or not – is it a closed road now or would there be, as Mike Pompeo pointed out, a smooth transition from Trump 1.0 to Trump 2.0? There is an opinion that with information concerning the electoral tactics – employed by the Biden campaign in his kitty and ready to be unfolded, Trump’s continuation as President might be in the cards, thus depriving his opponent of what would have been perceived a clear ascend to Presidential power. Details about this remain to be disclosed and only time – in particular, the next several weeks – will tell if this angle to the issue will materialize into a subject of attention among crowds. What’s more important to focus on now is the electoral college that will meet on December 14th   and finally again on Wednesday, January 6: The electoral votes are officially counted by Congress. It is what can be called the D-Day for America’s political scenario. Of the votes to be cast, if 33 or more end up in divergence with the popular vote, the Democrats will be having a tough time reckoning with what has transpired.

In 17 states, there is no particular legislation that binds electors to the corresponding popular choices. This is precisely why it’s premature now to arrive at rounded off conclusions without enough thought or observations to accompany these. There is a process that must be followed and until it is all over and done, there needn’t be a reason to urge anybody towards making any decisions. President Donald Trump did express the difficulty in getting the electoral cases up to the Supreme Court – however, this is only a challenge, not impossible. That window too, therefore, remains open to the GOP.

To whether Trump has won or will win, as of now, there cannot be a clear answer except to he 74 Million followers. As any dutiful, politically aware citizen ought to do, we should closely observe all that will happen in the next several weeks. But, one thing can be said for sure – President Trump has won a popular nod with 74 million rallying behind his cause to “Make America Great Again” what it should be. These are #MAGA voices that are genuinely concerned for the country and hope to see it bounce back with vigor. For one, President Donald Trump is not going to easily back out of the American politics that has so embraced him well in the past four years. The dynamism of this country’s events will go on for the long distant future.

There’s no denying the fact that having Trump on the ticket was a boost to the down-ticket Republican candidates nationwide. It will be interesting to see how President Trump approaches the next stage of his political life. Will he take a public role within the Republican party and with World Leaders such as Prime Minister Benjamin Netanyahu, Russia’s Vladimir Putin, Chinese Xi Jinping, North Korea’s Kim Jong-un for the next four, eight years? Will he stump for Republicans in tight races in the 2022 midterm elections? This is undoubtedly a convincing role for him to continue his dynasty into the history books with his family holding political heroes and heroines carrying on the Trump name.

His political influence, and his original profession; as a businessman, in theory, has made a clear path to position himself far better in the business world post-January 20th if he cannot secure a path through the malevolent powerful deep state that the far-left liberals have set for him and his 74 Million loyal and devoted followers. President Trump has built his brand on the fact that he is a master negotiator and by no means will ever fail. If he never concedes defeat, he can continue to declare that the election was taken from him and his 74 Million faithful supporters and WE did not legitimately fail and WE were not defeated.  #WeThePeople won, #WWG1WGA

There’s also a good chance that several of the Trump Team members will be going on to political careers of their own. Lara Trump, the wife of the President’s son Eric Trump, has already announced that she is considering running for a Senate seat in North Carolina. Many Trump supporters feel that Don Jr. would make an excellent candidate in the future, although he has stated publicly that he has no political ambitions. But I have a feeling that having Donald Trump as a father and seeing his success will change that.