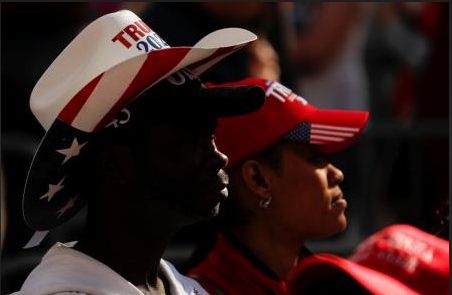 It’s 2 weeks later and the election results for president have yet to be finalized. It may still take days or weeks before all the votes are counted and certified – and that’s before all the court battles are resolved and all the investigations into reported election fraud have been concluded. Surprisingly, none of that is a surprise.

But something happened on election day that should be surprising to election observers because it represents a seismic shift in the entire election landscape in America, and yet the progressive media outlets are acting like it never happened.

What is this massive shift? It’s that Donald Trump won a bigger number of non-white votes  than any other Republican candidate since 1960.  According to the Edison Exit Polls, 35% of voters identify as non-white and 26% of them voted for Donald Trump.

In some counties, as many as 50% of Hispanics voted for Trump. And his support from gays roughly doubled since 2016.

Not bad for a racist homophobe!

Now all of this should be surprising to progressives Democrats and their allies in the media. They assumed, as they always have, that black voters virtually belong to the Democrat Party. They don’t, and blacks are starting to wake up to the abuse heaped on them by Democrats since, well, since the Democratic Party’s founding on it’s support for slavery.

The abuse by the Democrat Party against blacks has taken a very different turn in the 6 decades since LBJ’s friends started hiding away their white hoods. Today, those hoods have been replaced with Kente stoles, but progressive Democrats continue to take unfair advantage of black voters.

With high taxes and over-regulation, progressives have starved black communities of investment and prevented black small business startups. They’ve passed laws that incarcerate young blacks for non-violent offenses. They’ve rejected school choice and charter schools that give blacks a far better chance at a good education. And they’ve discouraged the formation of families in black communities by subsidizing single mothers. As a result 70% of black children are born without fathers in the home. The mentors of young black men often become the local drug lord; for young black women, there are no role models other than the single mom who has too little time for them.

Progressive Democrats add insult to injury when they tell young blacks they can never rise above their circumstances; that the system is rigged against them, that no amount of hard work will make a difference. In fact, progressives insist, black Americans must accept they are totally dependent on the beneficence of Democrat handouts; and, in return, blacks must offer their votes up to Democrat candidates or risk being cut off. It’s no wonder black voters are frustrated and looking for alternatives to dependence on their white Democrat overlords.

And then there are organizations, like the Stars and Stripes Forever PAC, which has spent 100s of thousands of dollars running radio ads in minority communities. Those ads push back against the progressive narratives that blacks aren’t equipped to succeed, that systemic racism rigs the system against them, and that they have no way out. The truth is that it’s not the free-market economy or American institutions that have worked to impoverish too many black Americans, it’s progressive Democrats.

Our radio commercials talk about the value of good schools and education choice in restoring opportunities to poor families. They talk about the importance of strong families, and the heartbreaking loss of hundreds of thousands of black babies to the Planned Parenthood abortion mills.

The ads also contrast the economic policies of Democrat and Republican politicians – the things black voters need to know in order to cast a vote that really serves their own best interests.

The Stars and Stripes Forever Super PAC was first established as the Draft Ben Carson committee way back in 2013, and we’ve worked ever since to encourage and empower black Americans.

The current chaos with our election counting should come as no surprise. We’ve known for months there were going to be huge problems with record-breaking quantities of mail -in ballots and inadequate systems set up to count them. The courts have also weighed in regularly to decide willy-nilly which deadlines would be honored and which ballots would be counted. Now all that confusion sewn in pre-election months is turning into post-election catastrophe.

Frankly, that’s old news. But for those in the new news business, the real story is the emerging shift in partisan loyalties among America’s black and non-white voters. It’s only just begun, but now that it’s started, there’ll be no stopping it so long as Democrat policies continue to trap blacks in despair and groups like Stars and Stripes Forever keeps pointing that out.

In Consideration of Tyranny: An Opinion