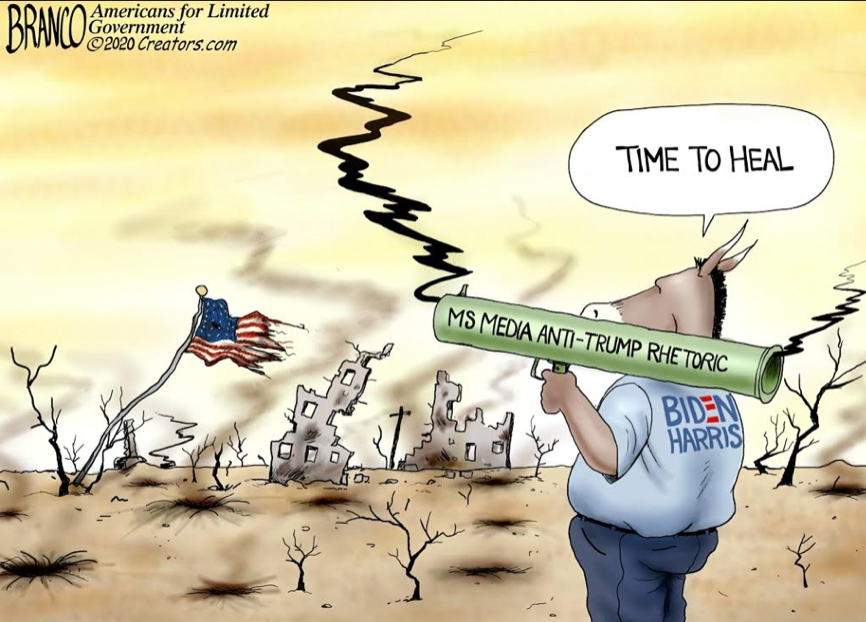 Biden is fond of saying he’ll govern as though there are no blue states or red states but only one United States. Then, in almost the same breath, he suggests Trump and his supporters are tearing the country down by delaying his coronation, uh, confirmation as victor in these elections.

To varying degrees of success, nearly every presidential candidate since Lincoln has appealed to national unity in their campaign. And, like Lincoln, I expect most of them actually meant to do what they say.

Nixon campaigned on unity in the midst of deep divisions caused by the Vietnam war and racial inequities. He did at least unify Democrats and many Republicans into supporting his impeachment after covering up a break in at Democrat headquarters. Rather than risk almost certain conviction for high crimes and misdemeanors, Nixon resigned.

Jerry Ford worked hard to unify Americans. Rather than watch a bruising and divisive criminal prosecution of former President Nixon, he pardoned him. That effort to avoid division caused his popularity to take a dive. It never recovered, at least not in time for the election.

Jimmy Carter promised reconciliation between Americans. 4 years hence he was blaming fellow Americans for a “national malaise.” He did, however, manage to unify 59% of America’s electorate to vote against his re-election.

Ronald Reagan didn’t so much talk about unity, as actually unify. He did it by reminding Americans of our shared values, hopes, and aspirations. He got Americans to support his vision for a prosperous economy and resurgent foreign policy and then he delivered.

Eight years later, George H.W. Bush, was elected at least partly on the theme of national unity. Like Carter 12 years before, though, he succeeded only in unifying 62% of Americans to oppose his re-election. His center-elitist approach to governing not only didn’t unify, it gave birth to Ross Perot’s candidacy who’s slogan was United We Stand. Perot received 18.9% of the vote.

Bill Clinton, who beat Bush “41” with just 43% ran on a theme of unity. And, to a large extent, Clinton successfully governed from a moderate-left bent. For most of his term, that moderation was assured by a Republican House and Speaker, Newt Gingrich, who reigned in the more liberal impulses of Clinton’s administration.

George W. Bush campaigned on national unity under his brand of compassionate conservatism. Unity was enabled to a remarkable degree by Osama bin Laden’s terrorism. But, alas, before the end of his second term Democrat leaders more often compared George W. To Hitler than to Lincoln. Not surprisingly, the infancy of a united nation which was fathered by Al Queda’s hatred suffered serious birth defects.

Then came Obama. We started these musings with the suggestion that most candidates who expressed a desire for greater harmony actually meant to promote that sentiment. In Obama’s case though, it’s hard to see his appeal to unity as anything other than a campaign tactic.

Obama acknowledged America’s deep divisions by expressing an even deeper divisiveness. Right at the outset, he talked of American’s clinging to guns and religion … and not in a good way. He blamed Republicans generally, and Bush “43” specifically, for the weakest economic recovery in history. He moved a hybrid big government/big insurance health care plan through Congress without a single Republican vote. He poor-mouthed police, excoriated conservatives, ruled by executive decree when Congress turned against him, and repeatedly demonized the wealthy for not paying their fair share.

The Tea Party movement, embryonic in the days of Ross Perot, was fully born thanks to the divisive politics of Barack Obama. He divided Americans along nearly every demographic possible – age, race, wealth, class, education, geography, gender, you name it.

Before Obama, no president since Jefferson Davis – and yes I know he wasn’t a real president – sought to divide Americans more fully than our 44th president.

There’s no question it was the disgust many Americans felt toward Obama’s political cynicism that encouraged them to turn to Donald Trump.

Before Obama, Trump as a serious candidate for president would have been unthinkable. After Obama, Trump became the go-to alternative for people fed up with elites who mostly ignored them and occasionally belittled them. It’s fair to say, that for most Trump supporters, it wasn’t just that they wanted to put their thumb in the eye of the ruling class; they also longed for a sense of American cohesion they saw slipping away with identity politics and political correctness.

In a sense, they got what they wanted – a president with almost no filter between his head and his twitter feed. He said exactly what was on his mind, all the time, no matter how impolitic.

Still, in an important sense, it wasn’t just Trump’s tweet-hurls that divided us. It was also the actions of elites who stood against him. For four years, Democrat leaders refused to acknowledge his presidential legitimacy. For Democrats, and Never-Trump Republicans, “Resist” became a strategy for governance, not just a thematic for political organizing.

So here we are, again. We have in Joe Biden a media-appointed “president-elect” who claims he’ll be a great uniter. Then, in the same speech, and with seemingly no sense of self-awareness, he mocks Trump and slanders Trump’s supporters for wanting to be sure Trump wasn’t robbed in a razor thin election by ballot procedures that often seemed opaque and murky.

Meanwhile, (media-appointed) Vice-President elect Harris has been traveling the country congratulating the roughly one-half of voters who chose Biden for choosing “hope, unity, decency and yes, truth.” But, by her calculus, the implication is that the other half of America only want despair, division, immorality, and deceit. This won’t cause Americans to reconcile, it will drive us further apart.

The body-language isn’t giving Trump supporters the unity warm and fuzzies. Instead, they hear echoes of Obama. It doesn’t help that Obama is back, recently urging, “each of us, to do our part … to find some common ground from which to move forward.” Sounds just like what we remember hearing a lot, but never experiencing much, when he was in charge.

And worse yet, Trump supporters hear what sounds a lot like the future promised by Bernie and AOC when Biden promises to unite us so we can “rebuild the soul of America”.

The problem is that “moving forward” and “unity” for the Biden-Harris-Obama-Bernie-AOC Democrats looks a lot like shut up and fall in line. If that’s their hope, they still haven’t learned.

President-Elect Karen: How the Establishment Media Has Made Its Choice