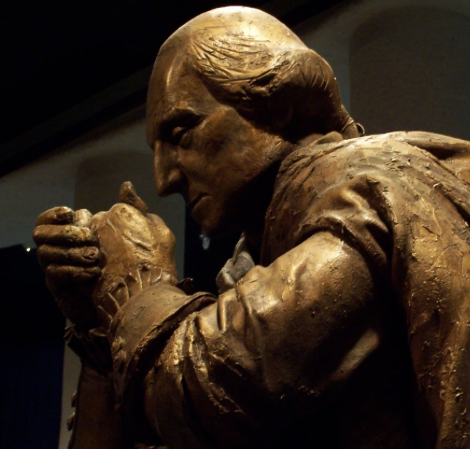 “The unity of government which constitutes you one people is also now dear to you. It is justly so, for it is a main pillar in the edifice of your real independence, the support of your tranquility at home, your peace abroad; of your safety; of your prosperity; of that very liberty which you so highly prize. But as it is easy to foresee that, from different causes and from different quarters, much pains will be taken, many artifices employed to weaken in your minds the conviction of this truth; as this is the point in your political fortress against which the batteries of internal and external enemies will be most constantly and actively (though often covertly and insidiously) directed, it is of infinite moment that you should properly estimate the immense value of your national union to your collective and individual happiness; that you should cherish a cordial, habitual, and immovable attachment to it; accustoming yourselves to think and speak of it as of the palladium of your political safety and prosperity; watching for its preservation with jealous anxiety; discountenancing whatever may suggest even a suspicion that it can in any event be abandoned; and indignantly frowning upon the first dawning of every attempt to alienate any portion of our country from the rest, or to enfeeble the sacred ties which now link together the various parts.” – George Washington, Farewell Address, Paragraph 9.

The above portion of Washington’s speech might just as well have been written some time in the past ten years.  It is a clear and present admonition that without constant diligence and faithfulness to the principles enshrined in our constitution, the risk of losing that document and its safeguards to liberty could be imminent.  It also suggests that our concerns should be focused on denying every effort to alienate any faction or portion of the country from any other.

What he describes is exactly what we have allowed to happen over the past 100 years.  It has been difficult to see when the average person is busy with their day-to-day activities just how much we have lost of the founders’ vision for our country because it has happened gradually and incrementally over such an expanse of time that succeeding generations took, and still take, the position that “it simply cannot happen in America.”  That, in itself, is heartbreaking, but it is also deeply troubling in the practical reality it has created. It can, in fact, happen here.

We are now witnessing an acceleration of the efforts hatched many years ago as the socialists of Europe fled the chaos of World War 1 bringing the seeds of that misguided ideology to our shores.  With the election of Woodrow Wilson, those seeds germinated into the 16th and 17th Amendments.  By providing the central government with a monumental pool of funding through the taxation of productivity (a highly counter-productive move, incidentally) they empowered more and more intrusion of that government into affairs more rightly within the purview of the individual states.

One size, after all, does not nor ever did fit all. At the same time, the latter amendment stole from the states the mechanism specifically created to protect the states from any attempt to usurp the authorities reserved to them by the 10th Amendment. What protected the states from the central government once the 17th Amendment denied them of their representation by the Senators? Today, few if any citizens even realize that the Senators were never intended to be their representatives, but rather the guardians of states’ rights. One could easily blame the education system for that failure.

The erosion continued with the nearly twelve-year reign of Franklin Roosevelt who used the unfortunate circumstances of the Great Depression and progressive justices on the Supreme Court to further adulterate the intent and meaning of Article 1, Section 8 of the constitution.  The complete twisting and distortion of the so-called “Commerce Clause” and “General Welfare Clause” unleashed the hounds of the federal government to feast on the carcass of our constitution.

We now find ourselves saddled with literally thousands of pages of federal regulations controlling hundreds of things that rightfully belong under the jurisdiction of the states. We are saddled with upwards of $27 Trillion in debt (just the federal part), and a dollar in 1920 is worth $.07 today.

To top it all off, the divisions among citizens in America has grown to just the sort of problem about which Washington warned.  Socialism has become a real threat to our way of life and freedom generally.  The policies being espoused by half the country are such that George would likely suffer physical illness over the very thought of their implementation in America. We watch as faceless bureaucrats decide things that our representative have delegated to them out of pure laziness, and this week’s election is being thrown into question by those same bureaucrats and power-crazy Democrats whose thinly veiled attempt at “expanding voter access” have actually been instruments devised to defraud the voters into thinking they are still in control through their votes while installing their preferred candidate in the White House through trickery and crooked scheming.

They certainly do not make Presidents or Senators or Representatives like George Washington anymore. Sadly, that is much to our detriment. Perhaps what is needed is for those who choose to run for office these days to shift their thinking to a view of their responsibility being one of protecting their constituents from the government instead of only seeking personal power and aggrandizement.

The primary question over the next few weeks is, “Will our Republic survive?”  Only God has the answer to that question at the moment. Perhaps we all need to commit to some serious prayers.  Otherwise, how will He know we even care anymore.  It becoming very hard to tell.