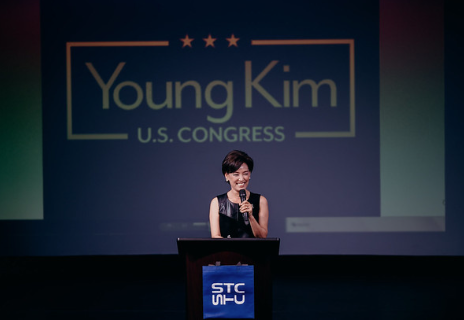 This past election, three Congressional seats flipped from Democrat to Republican in otherwise dark blue California. No big deal–until you understand why, and why it’s important.

Young Kim and Michelle Steel, both Korean-American Republican women, won in Orange County thanks largely to Vietnamese voters switching. Republican David Valadano unseated a Democrat incumbent in a heavily Hispanic district in California’s central valley. Add to these wins, Mike Garcia, a Mexican-American Republican, who was re-elected after flipping his Democrat seat in a special election last year.

2020’s election results should finally put a stake through the heart of the tedious Democrat hysteria that Trump’s rise means a white supremacist, all male, alt-right, nationalist Republican Party.

Once the votes were counted, the leftist mythos of a Lilly white, misogynist Republican Party  turned out to be exactly opposite the reality. Overall, Republicans elected a record number of women and minorities to Congress — 29 women, 7 Hispanics, and 2 African Americans.

Really annoying to the mostly left-wing media pundits and Democrat thumb-suckers is the fact that Trump himself closed the gap among ethnic voters this year. Trump received 30% of the Hispanic vote in 2020 compared to 26% in 2016. That 4% may not seem like much to brag about until you consider that for the past four years he’s fought near constant allegations of racism.

Add to that the even more startling fact that Trump got a whopping 18% of black male votes, more than doubling his vote from 2016, and you start to see a pattern that should have Democrats worried and Republicans hopeful.

How could this have happened given the almost constant chorus of racist allegations against Trump by his opponents? When you consider the media were happy at every turn to supply whatever dwindling credibility they have to confirm those allegations, it’s obvious the argument didn’t work. And, more poignantly, how could Trump “over-perform” with minorities in light of Biden’s insistence “you ain’t black” unless you vote for him, or his appointment of an “intersectionalist” dream candidate as his running mate?

Florida and Texas were supposed to turn blue this year because of their growing Hispanic populations. Instead, Biden cut Hillary’s lead in the heavily Hispanic Miami Dade by 23 points. Biden won by 7 this year, Hillary won by 30 in 2016.

The story was much the same in the border region of Texas. In Starr County, Hillary won by 60 points in 2016, this year Biden won by just 5. Hillary won neighboring Zapata County by 33 in 2016. This year trump won it by 6.

Closing the gap with Hispanics may not have helped him as much as it would otherwise have done had he not lost commensurate numbers of women and seniors, but still those center-right voters who held their nose to vote for Biden because they found Trump unacceptable will return to the Republican Party.  It’s not quite as easy to believe ethnic voters will go back to Democrats.

Democrats have counted on identity politics to make them the majority party for decades. They’ve increasingly argued that tribal identity equals individual interest and value; and that victimization should determine vote behavior.

But most Hispanic voters don’t really think that way. Julian Castro, Obama’s housing secretary, thought his being Hispanic would net him a huge share of primary voters. It didn’t. Polls of Democrat primary voters seldom showed him getting above 7% of the Hispanic vote.

Hispanic voters aren’t the monolithic vote Democrats wish they were. Hispanics don’t see themselves as a single ethnic group beholden to a political party or ideology, much less to Caucasian betters they must rely on for salvation. Give the devil his due though, the progressive white saviors have tried everything, even trying to rebrand Hispanics as a minority group. They claimed Hispanic was a colonialist term that must be overthrown with Latino, Chicano, La Raza, or LatinX. None of it’s worked. None of it will.

Hispanic just means Spanish speaking or descended from Spanish speaking. That’s a big group. It’s a lot bigger than the world’s population of native English speakers. Lumping them under one rhetorical rubric obscures their cultural and individual differences.

An August Pew research poll found that only 3% of Hispanics call themselves Latinx. 76% had never even heard of it. And the 20% who had heard of it, refuse to use it.

Hispanic immigrants, at least to the 2nd generation, are as diverse as the countries they come from. Cubans and Venezuelans have a very different reaction to the socialism of Bernie Sanders than say those from Argentina or Mexico. Class distinctions are also important. A Hispanic laborer nailing shingles doesn’t share the same worldview as his radicalized college student counterpart.

That’s a warning for Republicans who are increasingly seen as the party of blue-collar working families. More and more Hispanics are going to college and coming out radicalized. Those college graduates are also far more likely to vote than blue-collar Hispanics. 68% of Hispanics with a college degree say they’re excited to vote compared with only 50% without a college degree who say the same thing.

The Democrat’s favorite LatinX, Alexandria Ocaso-Cortez, blamed campaign strategy failures by her party’s bosses.  She claimed in the New York Times that Democrats didn’t spend enough money on digital advertising or enough time on “anti-racist, deep canvassing,” whatever that means.

She’s wrong, the truth isn’t that Hispanics don’t know enough about Democrats, it’s that they know plenty and many don’t want what Democrats want.

Most Hispanics don’t view themselves as the oppressed minority Democrats wish they did. Immigrants and their children have seen the real thing in their countries of origin. They aren’t excited to replicate the progressive policies they escaped, or hear about from their parents, who escaped.

The really bad news for Democrats though is that most Hispanic adults say they care about the same kind of things most other voters care about — more jobs, better health care, and more opportunities for education.

Those priorities provide Republicans a huge opportunity to pick up Hispanic votes if they’ll take it. The election results this year show Republican candidates are starting to do so.

Republicans are learning not to cede any voters to the Democrats. Not Asian votes. Not black votes. And not Hispanic votes. It will serve the party, their ethnic supporters, and especially America’s future well if they step up the effort.