Every Republican running for public office in areas run by Democrat political machines knows that he has to beat the voter fraud margin.

The voter fraud margin is the amount of votes that Democrats add or can add to the total to rig the election. 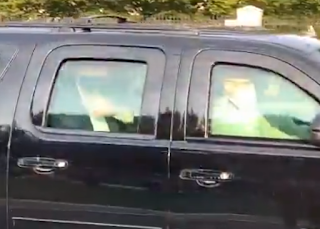 One of the unprecedented things about this election, in the year from hell, is that the amount of mail-in ballots, of ballot harvesting, made the voter fraud margin so much bigger. Democrats had set the ground by seizing control of key states and key positions in them in preparation for the election. And even where they didn’t, their machines got busy.

This was always going to happen. It happens every election, but the scale of it is different. As are the stakes.

I don’t have to state the obvious about all the Biden votes that “magically” showed up, about why vote counting was suddenly suspended, or why totals suddenly stopped being updated for no apparent reason.

These are symptoms of voter fraud. It’s a “Hacks at Work” sign being hung up outside the door.

America has one of the most unreliable voting systems in the world because everyone, especially Democrats, wants it that way.

The two questions in every presidential election are whether the race will be close enough that the voter fraud margin will kick in and can it be exposed. This is where the post-election street fight comes into the picture.

As I discussed in my article, Americans Won, Pollsters Lost, the margin needed low turnout. The more people went to the polls, the harder it was to sustain the scam. That’s why Democrats wanted minimal in-person voting and Republicans wanted maximum in-person voting. It’s much harder to steal an election if people show up.

The post-election street fight is a test of how big the voter margin fraud can get, how many more votes can be discovered than there are people, and how many ballots can magically show up overnight.

And even if the street fight is lost, it’s worth fighting because it exposes the lie behind the legitimacy of the powers trying to take over the White House.

That’s what happened on Election Day.

The polite voter fraud margin failed and they had to steal the election crudely. Now the real test between lies and truth begins.

The Democrats were far ahead in the money race. Elections had been rigged in multiple states, often unilaterally by Democrat governors, in unprecedented ways. The media and Big Tech had colluded to build a messaging operation for Democrats that actively suppressed Republican and even President Trump’s messaging.

And the pandemic, the lockdowns, and the riots had ravaged the economy.

Trump and Republicans went into this race as underdogs. And that was the right way to tell the story.

The media created a fake narrative bolstered with fake polls in which the country had turned against him and a blue wave was coming. Some conservative media, now increasingly littered with social media grifters, overpromised the other way.

The media’s Democrat narrative was meant to suppress Republican and Independent voters, and pave the way for a cover-up of the massive election fraud now underway, as I discuss in my article, “Americans Won, Pollsters Lost”.

But the stuff percolating in conservative media was social media clickbait. The only thing it did was lead a lot of conservatives to feel baffled and crushed.

2020 was an incredible election. Republicans made gains despite everything being rigged against them. The presidential election is still being contested. This is an underdog story.

Unfortunately too many conservatives went into this huffing up stories in which the black vote would turn to Trump (and in the process missed the much bigger story of the Latino vote in Texas and what that means) and California and New York would go red. The grifters got their clicks. Conservative media passed around its own share of bad polls, and I’m swamped with messages this morning from people wondering what happened.

What happened is that President Trump and conservatives beat expectations, won unexpected victories, despite everything being rigged against them.

Conservatives should be feeling that, instead of wondering where all the fake promises went.

Pros on both sides understood that this would be a close race that would be likely settled with a street fight over ballots in key states, Social media clickbait on both sides encouraged the creation of false narratives that have left a lot of people unhappy, angry, and confused.

Whatever happens now, this was not a defeat. It was a very close race in which conservatives outperformed the structural limits and expectations, and which may have changed the entire political landscape.

That sets the stage for future battles, one way or another.

If it ends up being that Republicans didn’t beat the voter fraud margin, this was a hard fight by underdogs against a corrupt system. Remember that. And forget the clickbait.

Leftists need to believe in lies. Conservatives should uphold the truth.

Ann-Marie Murrell on Election Integrity: I Can Hear Catherine Engelbrecht Saying ‘I Told You So’ From Here