When the Dodgers won the World Series, few Americans were watching the game that had once been dubbed America’s Pastime. The 2020 World Series broke all sorts of records, mostly bad ones, becoming the least watched world series. With an average of less than 10 million viewers, the series commanded the attention of some 3% of Americans.

The 32% drop in viewers came at a time when people, many stuck at home, are obsessively watching television. What were the other 13 million who had been watching last year do? The one thing they weren’t doing was watching a game they had once cared about. 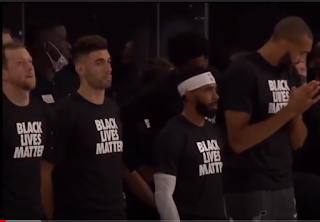 The media has frantically dug for apolitical reasons to explain these trainwreck numbers, but the simple reality is that sports used to be competitively divisive, but are now politically divisive. The truly woke viewers are exiting for the WNBA and women’s soccer, whose numbers are up, while conservative viewers are jettisoning current games for highlight reels of past glories.

Sports used to be a metaphor for America. Practice, play fair, and win. The rules might differ, but the meritocracy of talent and the ethics of sportsmanship were essential to American life. The metaphor is different now. Don’t bother playing, get woke, become a nuisance, score a $126 million contract with Nike, followed by a Netflix series about your life, and become an icon.

Sports is still a metaphor for America, but a very different kind of country in which talent doesn’t matter, but monetizing radical aggrieved victimhood is how the game is really played and won. And if that’s what it takes to become a sports icon, whatever your politics, why bother watching the game when you can tweet support for the BLM protests, or just get out there and riot?

Big Sports and the media are blaming the presidential election for their viewership drop. They’re not wholly wrong, but they were the ones who politicised the game. The message behind all the protests, the kneeling, the locker room boycotts, the emblems and the stunts, was that politics is more important than sports. Viewers took them at their word and changed the channel.

If politics is America’s real national pastime, why waste time watching a few failed Colin Kapernicks, who may have a better arm, but worse public relations timing, do their thing? If they had just dropped out and spent years protesting, they could have also been sports icons.

The problem with politicising everything is that everything then becomes irrelevant. If sports only matters when it’s political, then it doesn’t matter. Neither do food, fashion, music, or any of the other things that people used to care about before caring became exclusive to politics.

The Soviet Union only cared about sports as a vehicle for proving the superiority of the New Soviet Man so that even Soviet women playing sports turned out to be New Soviet Men. Soviet sports were uninteresting because they existed for ideological reasons. Players were advanced or tanked based on their sponsors within the Communist Party. Those athletes who could, did their best to escape the USSR so that they would be able to play for themselves.

But where do you go to defect from the NFL, MLB, or the NBA?

The Soviet Union flagrantly cheated when playing non-Warsaw Pact countries because the triumph of Communism was much more important than the rules of the game. But the whole point of a self-contained world with its own rules, absurd as they might occasionally be, is as a test of character. When the rules don’t matter, neither does the game. That’s the woke crisis.

And if we can’t agree on any rules, what’s the point of playing?

Big Sports began violating its own rules to accommodate woke protests against America. The impact may be less immediately destructive than Black Lives Matter rioters setting fire to a neighborhood, but ended up setting fire to the business model and ratings of the industry.

Sports has always been a form of ritualized combat whose purpose was a test of character. When character doesn’t matter and the rules don’t matter, all that’s left is the combat, and the real battles are taking place off the field and the court. And viewers are changing the channel to CNN or FOX News where the combat is closer to being real than in the sports bubble.

The media and Big Sports promise that will change when the election is over, but the fight isn’t over, it’s just getting started. Elections have become another game where the rules don’t matter. And in a country where ritualized political combat is becoming more combative and less ritualistic, ritualized combat that is becoming more political and less combative won’t play.

The NFL and MLB, and to a lesser extent the NBA, depended on a national consensus. The end of the consensus means the end of the nation and, much less seriously, their end. It’s no coincidence that the high point of the hero worship of great players came when Americans were united in their values and in their sense of national purpose, or that all of the above are passing.

Americans do fewer things together. The old network appointment viewing of sitcoms, dramas, award shows and games has given way to scattershot streaming geared to individual taste. Big Sports was never going to survive in an environment in which we agree on few things, and in which everything is a political test that will alienate a quarter of the country either way.

Big Sports, like their corporate partners, decided that pandering to the radical sports journalists, to woke companies, and to the Wokicrats who run much of the country mattered more. And in the process they revealed the underlying truth that Disney, Nike, and the cultural values of their executives mattered more than the games they pretended to care about. And the rest is history.

The falling ratings are a symptom of the end of sports. MLB, the NFL, and the NBA aren’t going away, but neither are they going anywhere except to Communist China. Like Hollywood, the country’s other big entertainment industry has abandoned America while expanding to China. Americans have less money and fewer people, and the rules of the game are too complicated.

In China, the rules are simple. Don’t mention Hong Kong or Taiwan, and praise the Party.

America’s cultural rules have become bewilderingly complicated as the country fractures, and there’s no way to win. Kneel or stand for the anthem, everyone still loses the Catch 22.

But the end of sports is the end of hundred million dollar contracts, not the end of the game. The games, the real ones, were played to see how far a ball can go and what a man can do. The familiar games we play had their echoes in the dust of medieval European towns and on Greek fields. The games will not be lost, only the huge corrupt industries that grew around them.

While the role of the billion dollar sports industries fade in the lives of ordinary Americans, the games will live on in backyards, cul-de-sacs, and grassy fields where we will go on playing them, instead of paying to watch others play, and we’ll do it by the rules we grew up with. We will go on standing for the anthem and testing our arms, our legs, and our hearts.

In sports, as in life, it is not the big organizations, but what we do as individuals, that define us.

President-Elect Karen: How the Establishment Media Has Made Its Choice

Greenfield: Democrat Anti-Semitism Turned Florida and Georgia Jews Against Them