The first to call the presidential election for Joe Biden was AT&T.

AT&T, through its subsidiary CNN, one of the largest conglomerates in the world with a market cap of over $200 billion, billions of which come from lucrative federal contracts, was the first to claim that Biden was the winner. Beyond government contracts, AT&T has a major stake in the 5G wars and has spent a lot of money investing in the Biden campaign.

AT&T employees were the tenth largest source of contributions to the Biden campaign.

Biden had attended fundraisers at the homes of two AT&T lobbyists, but the ties run deeper. 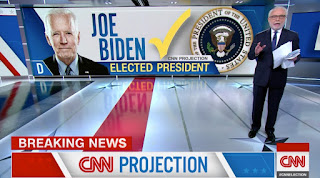 Steve Ricchetti, Biden’s former chief of staff, and longtime confidant, chaired Biden’s campaign. AT&T has been the only corporate client of the Ricchetti Consulting Group for nine years. Ricchetti has deep relationships with both AT&T and Biden. And if Biden were to take over the White House, AT&T would have its man on the inside to protect its economic interests.

That’s crucial for AT&T considering how hard the Trump administration fought against the illegal merger of AT&T and Time Warner which ended up hurting consumers. AT&T’s future expansion plans require a compliant and friendly administration. And that’s just what Biden would mean.

When Democrats claim that CNN’s call of the presidential election is somehow binding, what they’re really saying is that AT&T should have the right to pick presidents favorable to it.

CNN’s bias is not accidental. It’s about the money. CNN, as an economic entity, was a key issue in the merger with the Justice Department urging AT&T to sell components of the merged company, including CNN, as a precondition for the merger. AT&T and its CNN subsidiary had economic reasons, not just political ones, to want Biden and Ricchetti in the White House.

After AT&T called for the election for Biden, Comcast claimed less than a minute later that Biden was the winner through its properties, NBC and MSNBC.

Comcast, like AT&T, has deep ties to Joe Biden and a deeper animus to President Trump.

Biden launched his campaign at a fundraiser at the Philly home of David Cohen. Cohen is a Senior Executive Vice President at Comcast, and a senior counsellor to Comcast’s CEO.

Cohen, a powerful Philly Democrat official, named as one of the most powerful figures in the state, went on to reshape Comcast’s lobbying operation. Comcast, under Cohen, spends $14 million a year lobbying in D.C. The Washington Post called him, “Comcast’s secret weapon”.

NBC was not a sideline to Comcast’s opposition to President Trump. Like CNN and AT&T, it was crucial to it. Comcast had swallowed NBC Universal and then went on to blatantly violate antitrust laws and its conditions for the merger.

President Trump had warned that Comcast “routinely violates antitrust laws”. Comcast’s own expansion plans, after it lost Time Warner to AT&T, require Trump out of office. Its attempt to take over FOX’s entertainment properties (not including FOX News) fell through, and to keep growing it will need to keep acquiring content creators and cable providers. A merger with Verizon, the path to an even bigger nationwide monopoly, would be blocked unless Biden wins.

This year, Roberts announced that Comcast was plowing $100 million into various Democrat-allied organizations including Al Sharpton’s racist National Action Network, the NAACP, and the Community Justice Action Fund, a Tides Foundation project. CJAF is funded by corporations while closely intertwined with Democrat organizations and political agendas.

Despite all its social justice spending, the Trump administration caught Comcast discriminating against its employees in Philly, resulting in a settlement.

Comcast’s expansion plans also include an aggressive push into government business. Last year it picked up BluVector in its search for cybersecurity contracts and created a federal sales division. Its big plans for federal contracts will work much better if President Trump is gone.

Disney boss Bob Iger, who had considered running for president, was one of Biden’s big donors, maxing out his donations to the Democrat candidate, and plowing $250,000 into the Biden Victory Fund. Abigail Disney, Roy’s radical leftist granddaughter, kicked in another $50K.

Disney employees were Biden’s fourteenth largest source of political donations. And the company has significant ties to the Democrat infrastructure. Biden has longtime ties to Hollywood and has helped it broker deals in China. Disney’s big focus is on China. Its ability to release movies and maintain properties in the Communist dictatorship is crucial to its growth.

President Trump’s immigration policies and resistance to China was bad for Disney’s business. Disney’s reliance on replacing American workers with cheap immigrant labor and on dealing with China made getting him out of office vital to protecting its business model and its future.

Like AT&T and Comcast, Disney wants President Trump out, not for domestic or federal contract reasons, but to protect its economic dependency on Communist China.

After the oligarchy that is swallowing the economy made their call, the rest was anticlimactic.

The Associated Press, headed by Steven R. Swartz, the CEO of Hearst Communications, and Gary B. Pruitt, the former CEO of McClatchy, called it for Biden. Hearst is partnered with Disney.

Then FOX News, which depends on AP’s data, called it for Biden.

While FOX News describes its data set as the Fox News Voter Analysis, which sounds properterial, it doesn’t come from FOX. Instead the FOX News Voter Analysis comes from AP VoteCast. AP VoteCast is actually a project of the National Opinion Research Center at the University of Chicago. NORC is funded by the National Science Foundation whose directors are embedded for six years. As a result, France Cordova, an Obama appointee, held down the NSF for most of Trump’s first term. That’s the origin of the data set FOX News used to make its calls.

But FOX Corp already made its call last year when it hired Danny O’Brien, Biden’s former chief of staff and the head of his 2008 presidential campaign, as its head lobbyist. O’Brien went on working to help the Biden campaign while lobbying for FOX. That’s not an accident, it’s a plan.

After handing over most of its valuable entertainment properties to Disney, FOX Corp is a shell of its former self, but it still has entertainment and business interests beyond FOX News. What the Disney deal really meant was that FOX couldn’t compete with the monopoly bosses.

The real picture of the election and of the oligarchy can be seen in the order of Biden calls, with the biggest titans, AT&T and Comcast, getting first in line, followed by powerful, but more limited content powers like Disney and National Amusements, followed by dying organizations like the AP and FOX that have no future except servicing some of the big players in the new economy.

It’s not just about President Trump or the election. It’s about who runs the country.

The Democrats argue that when AT&T, Comcast, and Disney declare the election, that’s it. A handful of expanding monopolies can and should decide who’s going to be the president.

And the party of social justice and dirty cash is not even ashamed to make that argument.

America is not an oligarchy. Presidential candidates are not selected by a handful of lefty corporations or their media mouthpieces. The oligarchy has its fists clenched around the country’s neck. It has outsourced our economy, plundered our resources, and depressed the nation, while concentrating wealth and power in a few major cities and their suburbs.

The real question on the ballot was whether a handful of oligarchies should be running America.

When you look at the voting map, you’re not just looking at counties, but economic segments, some of which are incredibly wealthy because they’re concentrated around sources of government and corporate power, and others which are struggling to survive. The real poverty isn’t in the urban homeless encampments cultivated by Democrats, it’s in parts of rural America and the Rust Belt that are struggling to survive, but still working hard every single day.

2020 will not only decide who sits in the White House next year, but whether AT&T, Comcast, and Disney decide who gets to occupy the Oval Office, or whether the American People do.

Greenfield: The Law is There's No Presidential Transition Until Congress Certifies the Election

"Shut Up and Fall In Line" Is Not Unity.