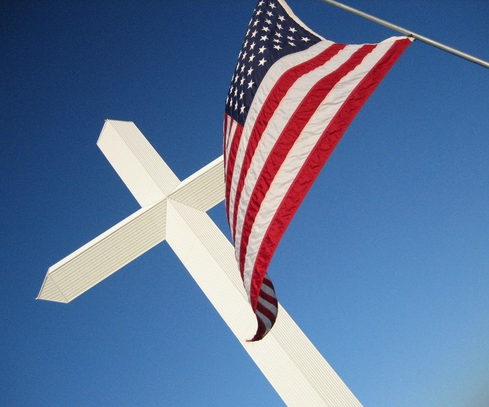 If I learned no other lesson from this year’s election, it’s this: As a Nation, we need to do a much better job of putting our collective Faith in God, not in elections, not in the economy, and not in a particular candidate. This Country has endured many trials and tribulations. From Civil War, to World War, to massive government corruption, we have always survived. No matter where one falls on the political spectrum, I would argue that this Country has not been the success that it has been based strictly upon the strength of the U.S. Constitution.

Our Constitution remains a powerful document, but it’s still just a document. It doesn’t have a soul and it isn’t a living being. Looking back on American history I would have a hard time making a case that the Constitution would have been as successful as it has been without the people and leaders who created it and have enforced it. The same goes for the American people who have lived under our present system of government.

In the days and months leading up to the election, I think the overriding sentiment throughout the nation has been one of fear and uncertainty. Your political orientation, whether conservative or liberal, would certainly dictate what media sources you tend to follow. If I stand back and objectively look at things, I think every aspect of this election has been described in absolute terms. We have been conditioned to think that if the candidates we support don’t win, then our Nation as we know it will cease to exist.

Is that really true? I don’t think so. The day after the election I had a very deep conversation with a close friend about misplaced trust. Leading up to the election, I know I was (and still am) enthralled by President Trump due to the legendary things he has accomplished. It’s easy to romanticize such a figure: A single individual fighting the full force of the media, big tech, and powerful political opponents and succeeding despite all odds. No matter what, Trump’s enemies cannot make any sort of argument that he lacks support. The Trump rallies leading up to the day of the election were a sight to behold. Trump clearly inspires millions of people because he praises traditional American values and believes this country is basically good. He will continue to inspire a deep sense of patriotism in Americans for generations to come.

I had given my friend a poster of depicting Trump as Superman a few weeks ago. We both loved the imagery. It was a humorous poster, but it did depict an underlying feeling that Trump was invulnerable and somehow superhuman. However, my friend came to the realization that such imagery of Trump had the unintended consequences of overshadowing something far greater–and Someone far more powerful: The Cross and the Blood of Jesus Christ.

As I was dealing with the realization that Trump would likely not end up winning the election, I didn’t let it destroy my nerves or take away my optimism for the future. God is All Powerful and in the end it’s God’s Will that will ultimately prevail. As the Bible says, God Works in Mysterious Ways. That assurance MUST always…first and foremost…be the source of our own peace and the peace of this Nation’s soul. God does not always make things easy and even in defeat, sadness, or disappointment, it should NEVER be forgotten that God is the One in Control and that good things can come from every result. For me, the results of this election and my friend’s wisdom have taught me that the soul of this Nation should be focused on Christ and the Christian Faith. Focusing on heroes and inspiring rhetoric is all well and good, but in the end, I have come to one conclusion:

This Nation, throughout most of its history has been a predominantly Christian nation. Would America be the success it is today without people who acknowledged Christ in their lives and adhered to Christian principles? Absolutely not. The Constitution is wonderful, but it has been that document ALONG with Christian values that have made this Country great. I’m never going to lose sight of that fact again.

There has been a lot of talk about the ‘soul of our Nation.’ However, I don’t think enough of us have thought about what that truly means. When we talk about the ‘soul of the nation’ are we referring to beliefs in secular principles and values or are we referring to Judeo-Christian principles and values? Faith in secular concepts of right and wrong are no substitute for God’s Commands of what is right and wrong. If we follow worldly concepts, then the result is the widespread corruption we see around us on an unprecedented scale. Only by focusing on God can we truly begin chipping away at the corruption eating away at our Nation.

Prayer is the answer to everything and right now all our collective prayers should be focused on the future and the health of our Nation. While I have reevaluated where my focus should be, it doesn’t change the fact that I still support our President. The deal is I see him in more realistic terms. He is a man and he isn’t immune to defeat. I do believe our President has come to know God intimately over the last 4 years. I think his expressions of Faith are sincere and I don’t think he has ever said anything to imply he is a substitute for Faith.

The reality is that President Trump is about to take on the greatest battle of his life: Challenging the results of a Presidential election. No losing candidate in American history has ever successfully exposed election fraud and overturned the results of a disputed election. It will be an uphill and to many people, an unpopular endeavor. What should he do?

As a Christian, I value honor and courage. This isn’t the first Presidential election with massive voter fraud. In 1876, Rutherford B. Hayes defeated Samuel J. Tildon in an election that few doubt was actually won by Tildon. In 1960 John F. Kennedy defeated Richard M. Nixon in an election fraught with voter fraud. Then of course in 2000, George W. Bush defeated Al Gore in the closest election in history. In each case, the loser conceded the election to the ‘winner’ rather than dig in and dispute the results. The reasoning being that it is better to concede and provide certainty to the public as to who their next leader will be as opposed to leaving the country hanging in limbo. History remembers the concessions of the aforementioned losing candidates as noble acts.

However, this is 2020. Its hard to believe how much has changed since 2000. In hindsight was there that big a difference between Bush and Gore? Certainly not to the extent there is between Trump and Biden. I’m forced to ask myself: “If you were cheated out of a legitimate win, what is more noble? Fighting fraudulent results or conceding the victory to the cheaters?” I’m sure Trump will take the stance that injustice must be fought at all costs. Some will call that being a poor loser, but what is dishonorable about ensuring the integrity of our elections? What about the legitimate votes that have been invalidated by the illegitimate votes? Don’t those who have been robbed of their voice deserve someone to fight on their behalf?

Trump can’t fight this alone. However, Trump, with God’s Help and the support of our prayers may be able to accomplish something meaningful. We need to pray for the Holy Spirit to intervene in the lives of all those involved and pray that their hearts will gravitate towards justice and honor. We need to pray that whatever the outcome, there will be an awakening in this Country. Despair and adversity lead us to seek God, and seeking God leads to lasting peace, and lasting peace is the key to the survival of our nation. God Bless America!

Ann-Marie Murrell on Election Integrity: I Can Hear Catherine Engelbrecht Saying ‘I Told You So’ From Here

Barry Nussbaum: The "Election" and What the Plan Has to Be