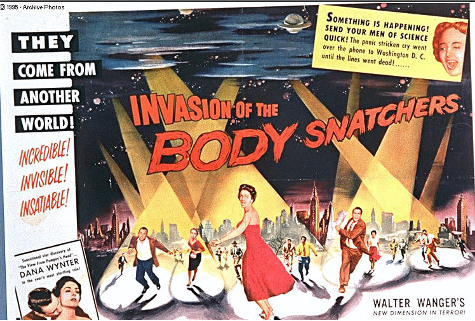 Just recently my wife and I watched again a DVD of the 1956 original version of the film Invasion of the Body Snatchers, based on the classic book under the same title by Jack Finney. There have been other versions since this film, however this to us is the scariest, black and white filmed in a small town, actually more  film noir science fiction.

There are distinct parallels between this classic film and what is going on today. Mysterious vote counts showing up just as the residents of Santa Mira, California in the movie are surprised to find that a family member, friend or acquaintance are no longer who you knew them to be. They are changed into emotionless zombies.

If I were still teaching I would risk my job to show this film. The main star Kevin McCarthy portrays Dr. Miles Bennell who returns home after attending a two week conference. At first he finds that while he was away a Delusion seems to have hit the community. People appeal to him as a doctor about family members and others who changed over night. No emotions though their memories are complete. One good happening is a former girlfriend Becky Driscoll, played by Dana Wynter, returns to the town at the same time he does after a couple year absence.

The couple with friends Jack and his wife Teddy find in Dr. Bennell’s green house giant seed pods growing with duplicates of themselves emerging. They conclude that townspeople are being replaced while asleep.

The four hide in Bennell’s office and find after a night of using pills to stay awake that outside a terrible plan is taking place. Truck loads from local farms arrive with giant pods and people in droves are assigned to take some in their cars to local communities. Something like today when we hear that box loads of Biden votes are appearing. Jack and Teddy leave to try to get help and then a changed Jack returns with other towns people who take Miles and Becky prisoner. The couple are given reassurances. What will happen will be needed replacements in society. Seeds were sent here by extra terrestrials to grow into pods and take over the world. Am I imagining too much when I think of China? The new people will no longer have worries about their previous work, what ever it was, no emotions to bother them and everything provided. There is no love and no faith. In other words no religion, no Christianity. Though the word zombie is not used, there is a similarity.

My mind goes to a favorite Bob Hope film The Ghost Breakers. Hope hears about zombies for the first time and is told, “It’s worse than horrible because a zombie has no will of his own. You see them sometimes walking around blindly with dead eyes, following orders, not knowing what they do, not caring.”  Hope, as Larry Lawrence, gives a reply that is classic: “You mean like Democrats?” Something I doubt he would be allowed to say today though he was a devout Republican. So what you can take from this scene is that the Pod People are like Zombie or more accurately Socialist Democrats. planted brain wise by Socialist propaganda they have learned from liberal teachers and the mainstream media.

In the film Miles and Becky manage to escape, however sadly Becky cannot stay awake and becomes a Pod Person herself. So alone Miles Bennell makes it to San Francisco very disheveled in the streets trying to stop traffic and warn people. When he sees pod bearing trucks he hollers , “They’re here already! You’re next! You’re next!”

Dr. Bennell is taken into medical custody and is one step away from being institutionalized. At that moment a report comes to the doctors that there had been a truck accident and a man had been dug out from a load of giant seed pods. Finally Bennell’s story is believed and roads out of Santa Mira are to be barricaded and the FBI is alerted. Fortunately not the FBI today. Was Comey a Pod Person?

The film ends with the good doctor leaning against a wall looking somewhat relieved. But you are not sure he should be. Is it too late? In the Jack Finney novel the Pod growing fields are set on fire. In the remake of the film, the 1978 color version in a city, all is lost.

Years after this version of the film was made my wife and I had the occasion to meet both Kevin McCarthy and Dana Wynter at an autograph show in Los Angeles. Seated together as they were it was easy to get joint autographs and chat with them. Kevin felt the film was originally geared to resemble the Red Scare we were going through about Communism. Dana felt it reflected many dangers American society had faced throughout its history. Like who can you trust in government. We have had betrayals going back to Aaron Burr. Both agreed we could easily face in the future something as insidious as was portrayed in the film.

I will not name names, but there are Democrats I have watched on television whose eyes seem as soulless as a Pod person and their goals for America similar to what Dr. Miles Bennell was told about when he was briefly held captive. So what do I take from all this. I cannot stand out in the street shouting “They’re here already! You’re next! You’re next!” But I can write articles like this examining what is happening to the soul of America? Why have we seen changes in certain so called leaders and even in the news media. I sadly see this in Fox.

A Republic...If You Can Keep It