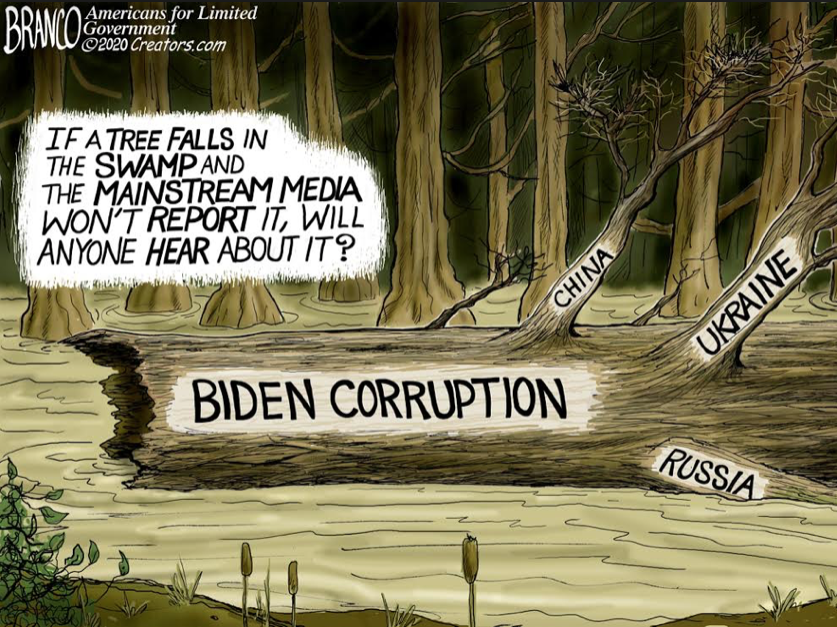 Joe Biden has been in politics and government for almost half a century. He believes his long tenure makes him well known enough – and well liked enough – that he needn’t deal with the pesky public or answer any difficult questions.

Joe has to be getting very nervous about some of the very radical policies he’s adopted from Bernie Sandersand AOC– policies he supported enthusiastically just a few weeks ago.

During the Democrat Primary, Joe promised he’d move to end fossil fuel, including fracking. As much as he now denies that fact, and the fact he embraced the Green New Deal, it still shows up on his website.

As Joe was formulating his fossil fuel ban – or stealing Bernie’s and AOC’s – he didn’t consider the number of jobs such a ban would kill. Once Trump pointed out that Biden’s position would kill hundreds of thousands of jobs, Joe suddenly took notice. He especially noticed that most of those jobs were in states that might go against him in the presidential election.

All that noticing started Joe down a flip-flop path he’s still traveling today. First, the flip, he said he never advocated and end to fracking (like he never agreed to reimagining law enforcement and never said he’d support “redistributing” money away from police.) Then Joe flopped when he said he wouldn’t stop existing fracking, but only new fracking. Later, he flipped again, and said he’d oppose fracking on government land, but not private land. He’s never acknowledged that achieving the goals in his own Green New Deal will require fracking’s end.

There there are taxes. Biden proudly promises he’ll raise corporate taxes, capital gains taxes, and death taxes. But he also promises no one making under $400,000 will see a tax increase. Then, in a direct contradiction, he says he’ll repeal the Trump tax cuts which gave most middle class taxpayers a $2,000 cut.

And Joe doesn’t seem to know, or care, that all the tax increases he wants for job creators will result in at least an average $6,000 loss each year on middle class families due to lower wages, fewer jobs, higher prices, and more regulations.

Trump also eliminated the Alternative Minimum Tax which hit millions of middle income tax payers: with Biden, it’ll be back along with higher taxes on nearly every American family.

Biden hasn’t acknowledged that his own Green New Deal — and even more Bernie’s and AOC’s GND — will cause energy prices to soar, equal to an additional $1,500 per year tax hike on anyone who drives a car.

And Joe hasn’t explained how the approximately $9 trillion in higher spending he’s proposed will be paid for. Higher taxes on the rich? There aren’t enough of them. More debt? We’re already $22 trillion in the hole, and on track to run debts equal to 150 percent of GDP in the next 10 years.

The top 20% of income earners pay 69% of all federal taxes despite making only 54% of all the income. Add in Joe Biden’s tax increases and existing state taxes, and they’ll run out of money pretty fast. If you live in California, 62 cents of every dollar you make already goes to state and federal taxes. In New Jersey, it’s currently 60 cents, and in New York, it’s 58 cents. With Biden’s tax hikes, those numbers will jump to 75 cents in California, 73 cents in New Jersey, and 70 cents in New York. Put another way, if you go to work at 8am, all of your work until 1:45 in the afternoon will go to paying your tax bill. That doesn’t count sales taxes, property taxes, bridge tolls, gas taxes, and all the other taxes we get to pay to states, municipalities, counties, and the feds.

Where is John Galt?

Never in American history has a presidential candidate hidden away for 5 of the last 17 days before the election.

A few theories. Maybe he believes that if he stays hidden he won’t have to answer questions about his son’s selling access to his Vice President father to any buyer on the international market.

Some are guessing that Joe and Jill – along with his handlers – are trying to figure out what to do about this mess; and what to do with Hunter. As of this writing, I haven’t heard of a single soul who’s seen him. Rehabmaybe?

Another theory is that Joe’s preparing for debates. That’s what his handlers claim. If true, they’re probably trying to figure out how to incite Trump to blow his top. Make him look like a hot head. The problem is that anger Biden’s weakness, not Trump’s. For all his brusqueness and irreverence, Trump is calm. More than any other president in memory, Trump’s been through the grinder – angry politicians, disloyal staff, deceitful journalists all leveling a constant stream of untruthful allegations. It’s Biden who claims questioners are, “damn liars,” “dog-faced-pony-soldier,” “full of s___.”

But the Biden clan have more serious problems. First question is how do you win the election now that the corruption cat is out of the bag? How do they keep enough of the Hunter-Joe money-grubbiness under wraps until after November 3rd. They’ll certainly get all the help they need from the mainstream media. So far, most of the media have responded to revelations with two words, “Russian disinformation.” Any journalists that have departed from that narrative have mostly been laughed off or shouted down. Still, there’s enough evidence out there it will be difficult for the media – and the campaign – to keep the lid on tight.

Next, they have to figure out how to avoid Hunter going to jail and Joe Biden not getting impeached and thrown out of office should he win. This isn’t going away. Unlike the non-stop and entirely false allegations against Trump, there’s just too much evidence of wrong-doing and self dealing. In fact, now there’s evidence Biden himself received an actual percentage of the action – at least the action with China.

One thing his handlers may be talking about today is whether Biden will resign the day after the inauguration and allow Harris to take over. Given Biden’s health, a potential Harris succession must always have been part of their calculation.

One thing is certain, Biden has a long history of lying to the American people. He was even forced of a previous presidential race after evidence surfaced his speeches were plagiarized. With more than a thousand emails in the hands of the New York Post – and the FBI – we can expect a lot more as the Hunter Biden saga continues to unfold.

Actress Rebecca Holden: A Message to America Before the Election