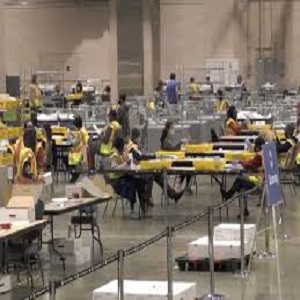 The men who signed their names to such documents as the Declaration of Independence and the Constitution did so knowing they were risking their lives in doing so.

They did it anyway.

While most of those signatures came from men born in England, they wanted something different for their children who were natural born Americans. They wanted something permanent and lasting. They wanted to pass down a nation that would be free. A nation where its citizens determined their own destiny, were the masters of their own free will without an all seeing, overarching government involved in every aspect of their lives. They wanted to ensure that future generations would elect their own representatives and leaders in fair and honest elections. Sometimes their candidates would win, sometimes they would not. But in every case, the elections would determine the will of the people, and each time there would be a peaceful transfer of power, and the work of America would go on.

But something happened on the way to the 2020 election. Actually, it began long before the election. Some might argue that it started back in February as Corona virus began its grip on the nation. Did a certain group of people, both elected and unelected, realize they might have something that would be of some help long about November? We may never know, what we do know right now, is that hatred and power are intoxicating motives. What started out as an election may have all the earmarks of yet another soft coup.

The pathological hatred that Democrats and the Left have for Donald Trump has been on full display for four years. The reasons have become clearer with each new manufactured scandal. Donald Trump is an outsider. He is not a politician, and his intent on arriving in Washington was to work for the American people, and “drain the swamp” of D.C. politics. He had succeeded in doing one, and we can only guess that he was well on is way to doing the other. The Democrats and the media, one and the same, knew they had one last chance.

It started pretty early on election night. States that had less than one percent of the vote counted were being called for Joe Biden. But Donald Trump began to pick up some speed and began to win states. As battleground states began looking like they would swing for Trump something happened. Everything stopped. No more votes were tallied, no more states called. As the wee hours of the morning rolled around, some states even declared they would stop counting for the night. What was going on? When the engine started back up again, the mainstream media, along with their newest member, Fox News, began calling states for Joe Biden. In some of those states, voting was still going on.

The theft of the 2020 Presidential campaign is in full swing. This heist has several components. We now know why the Democrats pushed so hard for mail-in ballots. “It’s because of COVID!”, they screamed. No, it is not because of COVID. COVID is what gave them the means to foist a disaster like mail-in ballots on the American people. Democrats figures that if they scared enough people into staying away from the polls that part of the scheme would work. If we are going to talk about mail-in voting, we also need to address “early” voting. What exactly is the purpose behind early voting? We are told that it is merely a convenience so people can avoid long lines on Election Day. So we were treated to nightly video footage of people telling tales of waiting in line for up to two hours to vote early….wait for it….so they could avoid a long line on Election Day. No, the purpose of early voting is to have a back up to mail in voting. It is all designed for one thing, fraud.

Despite the fact that Joe Biden and his toadies in the mainstream media have taken to calling him “president-elect”, there are a lot of ballots to be counted. Most credible news outlets have pulled places like Pennsylvania and Arizona out of the win column for Joe Biden because they are still toss-ups. According to the Heritage Foundation, instances of blatant fraud have ben found in at least ten states. Here is the question that no one else will pose. Is this now an invalid election? Are the current results so skewed and tainted that we will never get an accurate vote count with the state of these ballots? More and more people are saying yes. Yes, this election is invalid. Illegal votes are not to be counted. Not allowing Republican observers into the counting process, and other clear instances that have been witnessed violate federal election law.

This goes beyond Donald Trump and 2020. Election integrity is one of the hallmarks of our republic. If we do not weed out election and voter fraud where ever it is, not only will Republican candidates not win another election, but half of the population of this country will believe that their vote does not count, and is therefore ignored, thrown away, or in some other way discounted. This causes incalculable damage to the nation, and the ideals and values that all Americans, regardless of Party should hold dear. The idea that they can vote freely, and without fear of dishonesty, for the candidate of their choice. If that goes away, then our nation as a whole has, quite frankly, been violated, possibly, beyond repair. Not as conservatives and Republicans must we fight this to the end, where ever that takes us, but as Americans, if we have any chance to keep our Republic.