Before the election, Brandeis University’s Steinhardt Social Research Institute marked Georgia, along with Florida, as one of the states where the Jewish vote could help decide the election.

Georgia has 103,000 Jewish voters and Democrats had been counting on them to flip the state. 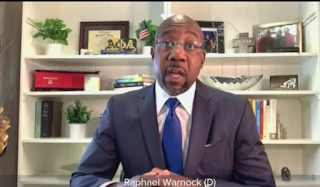 With a Senate election and special election, two Senate seats were up for grabs, and Democrats threw money at former Al Jazeera collaborator Ossoff and activist Warnock.

Jon Ossoff raised $32 million in the Senate election, outspending incumbent Senator Perdue by almost 50%, with much of the money coming from California. Over $50 million was spent on pro-Ossoff ads alone.

Warnock had signed on to a statement falsely accusing Israel of being an apartheid state, falsely describing Gaza, which is controlled by Hamas, as an “occupied” territory oppressed by Israel, and falsely claiming that “Jewish” people engage in “segregation”.

The letter signed by Warnock also ranted that, “Israeli fear… begets hatred” and demanded an end to weapons sales to Israel.

Despite Warnock’s hostility toward the Jewish State, he was backed by the Jewish Democratic Council of America over Matt Lieberman, Senator Joseph Lieberman’s son.

Soros’ Bend the Arc PAC aggressively supported Warnock as their man in Georgia.

“Raphael Warnock knows our Georgia Jewish community,” an ad by the anti-Israel group, founded by a former sex club dancer who had participated in anti-Israel protests, claimed.

The Jewish community of Georgia knew Warnock all right. And it spilled over to Biden.

The Associated Press exit poll showed that 48% of Georgia Jews voted for President Trump and 49% for Joe Biden: a near split. While Trump’s strong record on Israel and fighting antisemitism abroad and at home no doubt helped, it’s hard to dismiss the Warnock factor.

Georgia Democrats had backed a candidate who had ties to a notorious antisemitic figure and who had signed a letter accusing Israel of apartheid and segregation, and Trump took home half the Jewish vote. The situation isn’t likely to get any better as Warnock heads to a runoff.

In the other Senate race, Jon Ossoff tried to accuse his Republican opponent of antisemitism, claiming that an ad had given him a nose job, but Ossoff had collaborated with Al Jazeera, Qatar’s violently antisemitic propaganda network, which backs Hamas, had featured calls for another Holocaust, and which had been sued by former employees for antisemitism.

His mentor, Rep. Hank Johnson, had even compared Jews in Israel to termites.

Ossoff is unsurprisingly anti-Israel and was backed by big spending from J Street: the anti-Israel lobby group. He’s also a supporter of the Iran nuclear sellout which funneled billions to the Islamic terror state and signed off on its nuclear program with no inspections on the ground.

Democrats had hoped to use Ossoff, who has Jewish ancestry, to mobilize Jewish voters, but the AP exit poll suggests that Ossoff was as helpful as Warnock.

In New York, Governor Cuomo and local Democrats had decided to use the final months before Election Day to scapegoat Orthodox Jews for their failure to manage the pandemic. These false accusations were bolstered by deeply dishonest media smears and discriminatory enforcement.

What was the response to this systemic antisemitism by the Democrat establishment?

In a number of majority Chassidic Jewish areas in Brooklyn, President Trump won between 80% to 90% of the vote. That’s not a new development. Republican presidential candidates usually walk away with the vast majority of the vote in Orthodox Jewish areas in New York.

In Rockland County, Trump won the majority of the vote even though registered Democrats outnumbered Republicans 2 to 1.

But no Republican can get to the White House through New York even if he’s a famous New Yorker. It’s a very different story in Florida where so many former New Yorkers ended up.

Florida has the largest Jewish population of any swing state and it has one of the largest Jewish communities of any state. And while there are plenty of Jewish conservatives in Florida, the Jewish vote out of Florida tends to favor the usual Democrat hacks. But not this time.

A J Street poll had claimed that Jews would go for Biden by 73% over Trump. Like everything the anti-Israel and pro-terrorist group founded by Soros money claims, it wasn’t true.

As Jonathan Tobin at JNS notes, “Trump got about at least somewhere in the vicinity of 150,000 Jewish votes. In a competitive state where he wound up winning by only 377,000 votes.”

Before running for office, President Trump had almost as sizable a presence in New York as he did in Florida, and local Jews have stories of him opening up Mar-a-Lago to Jews and making its kitchens Kosher at a time when most private clubs on the island continued to bar Jews.

“No one called Mar-a-Lago a Jewish club, but especially in the early years, that’s what it was,” an otherwise negative Vanity Fair article noted.

And again there’s no question that President Trump’s pro-Israel policies were a game changer.

But the antisemitic incident that dominated local Jewish news in Florida this year didn’t happen at a private club in Palm Beach, but in a high school.

William Latson, a high school principal, had responded to an email from a parent asking about Holocaust education by arguing, “Not everyone believes the Holocaust happened.”

In its own October surprise, the Palm Beach County School Board voted to rehire the Holocaust denying principal and pay him six figures in back pay.

Racial tensions were stirred by the vote because Latson is black and of the four board members that initially voted to rehire him, two, Marcia Andrews and Debra Robinson, were black, and, more significantly, all four, had close connections to Democrat and leftist organizations.

Shaw, a former Democrat official, had blamed the scandal on reporters who “took over this entire conversation before the superintendent had an opportunity to even begin to address this.”

After the public outcry, the board voted again, and rescinded the move, perhaps realizing that the last thing Democrats needed right before an election was an antisemitism scandal.

But by then it was too late.

There’s no way to know what impact the scandal had on the Florida Jewish vote, but the spectacle of Democrats signing off on Holocaust denial could hardly have helped.

While the media trumpets national polls that claim that the vast majority of Jews voted for Biden, the AP’s own exit polls in Florida and Georgia raise serious questions about those claims. And the state of the Jewish electorate in swing states is far more significant than national polls.

What happened in Georgia, Florida, and parts of New York shows significant fractures between the Democrat organizations trying to control the Jewish vote and Jewish voters in key areas.

President Trump’s ability to win over around 1 in 2 Jewish voters in Georgia and Florida is a warning that Democrat antisemitism carries a price, and that throwing money at astroturf groups like J Street and Bend the Arc that don’t represent Jews and never will, is not the answer.

If anything it only makes things worse.

Covering up antisemitism with Democrat candidates that have Jewish last names and a hatred for the Jewish state, with radical politicians who attack Jews and then expect astroturf lefty groups to bring in the Jewish vote, isn’t working anymore. Neither is peppering ads with, “Oy”, “Schlepp”, and “Gevalt” in a condescending minstrel show effort to relate to Jews.

Rep. Debbie Wasserman Schultz of Florida had famously replied, “abortion”, when asked why Jewish voters should cast their votes for Obama.

That’s not going to cut it anymore. Neither are videos by Sarah Silverman and Seth Rogen.

Democrats expected Jewish voters to help them flip Georgia and Florida. Instead, Jewish voters flipped them off and voted for President Trump.

If Democrats can’t rein in their antisemitism, next time they may not split the Jewish vote in Florida.

They could lose it outright.

Greenfield: The End of Sports

Ann-Marie Murrell: My Father's Ring and the Little Miracles of November 22