“If we just wore these masks,” Joe Biden said, at the final presidential debate, holding up a mask like a totem, “we can save 100,000 lives.”

The Democrat nominee’s plan for fighting the coronavirus was all about wearing masks. And indeed the only notable element of Biden’s plan has been a national mask mandate.

But would that actually work? Would it even save one life, never mind 100,000?

Few European countries have been more mask-obsessed than France. 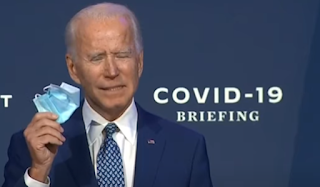 In July, France issued a national mask mandate compelling everyone to wear masks indoors in public spaces. Anyone caught not wearing a mask would face a fine of around $150. In August, Paris and a number of other regions imposed mask rules for anyone leaving the house.

Forget the stereotype of the Parisian nonchalantly dangling a gauloise between two yellowing fingers. “You’re not allowed to smoke on the street without a mask; you can’t take it off, so you must find another way,” Deputy Mayor Anne Souyris snapped.

How were Parisians to smoke without taking off their masks, cutting holes in them, or setting them on fire?

In a nod to another French obsession, cyclists were temporarily exempted, but AI was deployed on the metro to automatically detect which passengers weren’t covering their faces.

Some cynics suspected that this had something to do with France’s mask surplus. After buying a billion masks from China, the worldwide hub of the fashion industry ramped up its own mask production, but the demand wasn’t there leaving manufacturers with a 40 million mask surplus.

The initial drive to produce 5 million masks a day had left a lot of masks, many of them fashionable fabric masks, useless but pretty, sitting in warehouses with nowhere to go.

As the summer heat wore on, inspectors marched through French workplaces to check that everyone was masked. In a nod to class privileges, bosses were allowed to unmask in their private offices, but workers were forced to keep masks on unless they had 13 feet of space.

Still, 78% of French people polled claimed that they studiously wore their masks.

How well did that work out?

France recently passed 1.1 million confirmed cases and hit a record of over 52,000 cases in one day. While the media has been warning that the numbers are spinning out of control in the United States after this country passed 80,000 cases in a day, France’s numbers are far worse.

America, after all, has a much larger population than France.

Despite its strenuous mask regime, France became the country with the fifth largest number of cases, falling behind larger countries like America and Russia.

And it’s not alone.

In Spain, where 86% of people wear masks, the government has declared a six month state of emergency with nightly curfews and gatherings limited to 6 people. The only legal reason to leave your house after 11 PM or before 6 AM is to go to work or deal with an emergency.

Spain hit the 1 million mark even before France did.

And that’s despite a nationwide mask mandate back in May, along with a ban on public smoking, making it one of the first European countries to go all in on masks.

Even though masks became more widespread in Spain than most of the rest of the continent, and the country whose totalitarian past lies close to the surface, has unleashed some of the toughest lockdown measures, this is now Spain’s third coronavirus resurgence.

Italy, where 81% wear masks, responded to yet another spike with a fourth set of lockdown restrictions, shutting down gyms and theaters, while forcing restaurants and bars to close by 6 PM. No one is allowed to watch soccer games in person or go to wedding receptions.

Despite all the masks, Italy still holds the record for the second-highest death toll in Europe.

Meanwhile in Sweden, only 5% wear masks. The authorities have never recommended them believing that they are a waste of time. Sweden has used a soft lockdown that avoided fines and mandates. And the media in lockdown countries has spent the months lambasting Sweden and warning the rest of the world not to use it as a model.

But Sweden isn’t alone. In Denmark hardly anyone wears masks. And in Norway, less than a sixth do.

In the UK, where less than a third of Britons wear masks, the death rate is only a little higher than Italy, and it still hasn’t hit the 1 million mark despite a larger population.

In Europe, as in America, masks are a cultural, not medical, practice. The people likeliest and unlikeliest to wear them have cultural similarities. And they wear them for the same reason that the Biden campaign embraced wearing masks, not as a plan, but as a cultural symbol.

Wearing masks is not a plan to stop the virus, but it is a fetish of conformity. That is why so many politicians use the language of “respect” rather than medicine to encourage the practice.

Medical practices don’t need to be respected. Cultural beliefs, especially irrational ones, do.

The discomfort of wearing masks, especially in the hot southern countries like France, Spain, and Italy, perversely seem to affirm their effectiveness in the same way that some mouthwash manufacturers make their brands taste astringent to seem more medicinal.

People are trained to think that what is medically effective is also physically uncomfortable.

When the Black Death arrived, medieval Europeans resorted to a variety of practices and cures, some useful and many useless, some that had roots in a legitimate concept of illness, others that were little more than voodoo, to deal with a pandemic that had no easy answers.

The obsession with masks, an actual useful medical tool transformed into a cargo cult fetish, has echoes of the medieval misuse of legitimate medical practices during the Black Death.

In some medical environments masks may offer potential benefits, but mandating that entire populations wear them accomplishes nothing except keeping the French textile industry employed. That and the assorted unhealthy consequences of constantly wearing a mask.

But whether it’s using a severed snake to try and draw out the Black Death or wearing a mask, people in an outbreak feel the need to grasp at some means of controlling the threat. And they become angry at anyone who doesn’t appear to respect their chosen control mechanism.

Wearing a mask is meant to prevent the spread of the virus, not to protect the wearer. A CDC study showed that 88% of those infected wore masks. But the medieval logic of masks falsely assumes that wearing a mask protects you from the virus and that the virus only spreads due to those who don’t wear masks. And that creates natural scapegoats for the pandemic.

The Biden campaign and the Democrats are cynically cashing in on these pandemic fears.

“We’re in a circumstance where the president thus far and still has no plan, no comprehensive plan,” Biden ranted at the debate. “What I would do is make sure we have everyone encouraged to wear a mask all the time.”

France, Italy, and Spain tried that. It didn’t work.

The European countries most obsessed with masks are doing the worst. Nearly universal mask wearing in those countries has done little to prevent a surge. Democrats have a weakness for wanting to be like the Europeans. But the only thing the Biden mask mandate would do is turn us into France. The French wore masks through the summer heat only to have three times the cases per capita and per day as the Americans who never adopted a mask mandate.

Maybe, instead of Americans adopting the Biden mask mandate and becoming more like France, it’s time the French tried a little bit of freedom and being more like Americans.