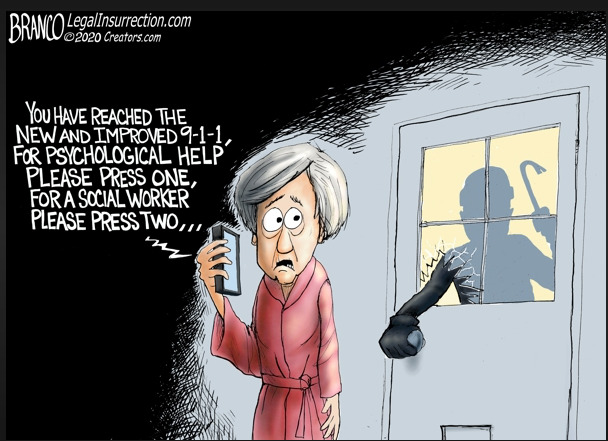 I’m rarely very good at predicting the future; if I were better at it, I’d be focused on Power Ball rather than politics.

But since the liberal establishment has already foretold their future plans for the country, there’s not much prophecy required. Don Lemon of CNN says, “We have to burn the whole thing down.” He’s not alone; thousands of social media posts say the same thing, many from media and entertainment celebrities like him.

I’m speculating now, but I assume he’s talking about most institutions of government, maybe even government buildings, police stations, and charter and Catholic schools. One of many problems with the left’s rhetoric is they don’t really make clear who or what they’re talking about, or why. Could be they mean your home and mine for no reason other than we’re conservative, support the constitution, and intend to vote for Trump’s re-election.

They haven’t yet attacked military bases, at least physically, but that will make for interesting television. Based on what they’ve targeted over the last three months, it certainly includes any retail establishment, churches (but not mosques,) gas stations (for the Big Bang effect,) and car dealerships (The Green New Deal says they all have to go anyway, so why not now?)

Much of this will be done by the folks Juan Williams of FOX News calls “peaceful protesters.” These peaceful protesters from the Marxist groups Black Lives Matter and ANTIFA have been honing their destructive skills on cities run by Democrats because that’s where they experience the least push back from local law enforcement.

Apparently, they’re holding back for the main event of actually “burning it ALL down,” until they get a green light from Kamala and Joe. Or maybe Nancy will give them the final go-ahead. In the meantime, they’re stocking up on the guns, ammo, armor, and other weapons they’ll need once the real fight begins.  Where are they getting all the money for their pyrotechnics and weapons? Who knows, but I’d suggest the investigators start with George Soros.

Generally, I resist predicting the future. I also usually avoid joining in on the dooms-day conspiracy theories, especially those that might harm my country and my fellow Americans.

But no one on the left is doing much to encourage the leftists to stand down. Most of the prosecutors where the violence is happening are MIA. They’re progressive Democrats. The police arrest the rioters, when they’re allowed to, then local progressive prosecutors release them to riot anew.  In New York City, Mayor de Blasio calls it bail reform. Kamala even gave to a fund in Minneapolis that has bailed out child sex offenders and rapists along with rioters and looters.

It seems the radical left believes now is the time to take over the country, and impose their will on the American people. If force is required, so be it.

From what I can tell, the progressives in the Democrat Party seem to think all the destruction, rioting, looting, assault, and murder are just fine. Or else they think the violence makes good politics and improves their chances for winning in November. After all, they’ve said little about the violence and when they do speak it is mostly through mealy mouths.

More than 800 cops have been injured, many badly. Some have been killed. All by “peaceful protesters” who feel entirely justified to add to their targets local residents, shop-owners, and innocent bystanders. We have seen victims dragged from their cars and beaten to within an inch of their lives by thugs who simply see it all as good sport. They block streets and highways to show their power over the rest of us. They don’t care who is in the car or why. And when someone tries to reason with them, they drag you out of the car and beat the life out of you for trying to “impose” your will over them.

The ANTIFA and BLM thugs are little more than animals who swarm their victims for no reason other than they don’t like the way you look at them. Oh, and then while you’re laying broken in the street; they search your pockets, steal your clothes, and take whatever they like. According to a BLM organizer in Chicago, it’s reparations.

Most Americans are appalled by all the violence. It’s why gun sales are through the roof in the last few months. People see liberal politicians forcing police to stand down and worry for the safety of themselves and their families.

How crazy have things become when rioters and thugs get off, but those forced to defend themselves get the book thrown at them? That’s what’s happening all across America. If you don’t already have your carry permit, get one.

The founders of our country preserved our right to bear arms and protect ourselves and our families by writing it into the Bill of Rights. Apparently they were better prognosticators than me, and saw the potential threat more than 200 years ago. The “burn-it-all-down” progressives hate that because it may well be the thing that stands between their desire for chaos, and our ability to protect ourselves and preserve the country we love.

Listen, I hope to hell I am wrong about all of this, but if events over the past 5 months are any indication, it’s only wise to arm yourself and train to use your weapon safely. You can no longer assume calling 911 will work.

Politicians Slipping Through Election Cracks: Could It Happen Where You Live?