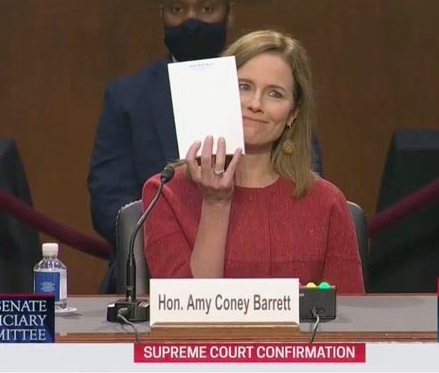 If one is human, one must have extreme compassion for Judge Amy Coney Barrett as she endured her first full day of questioning by at least the Democrat contingent of Senate Judiciary Committee members.  The reality is, there were only about three serious questions among all the inane garbage and propaganda spewed far and wide by the Democrats on the committee. Those question, however, were ones that they knew before-hand that Judge Barrett would not answer.  All three started with “How will you rule…” followed by “…on Abortion, Same Sex Marriage, or Campaign finance reform cases.”

Senator Horono of Hawaii won the award for most ridiculous and insane question asked for the whole four days of hearing.  It is highly unlikely that it will be topped in the next two days as it asked Judge Barrett if she had ever committed an act of sexual assault or harassment since she reached legal age. How much more could they possibly offer to insult everyone’s intelligence?

Some interesting tidbits, though, emerged that fully exposed the woefully inadequate understanding of constitutional principles among those on the left wing.

First there was Senator Whitehouse that spend most of his time shuffling signs, graphs, charts and other visual aids trying to make the case that The Republican Party was corrupt in the way they selected candidates for judgeships or for the Supreme Court. He claimed that because the names of President Trump’s list of potential nominees were recommended by the Federalist Society and that group was funded by another group that did not disclose its donors (legally not required) and that group was in collusion with another group that included money from the Koch brothers that overall amounted to a quarter billion dollars that there had to be an expectation of their candidates for spending so much money.

Fact is, the Federalist Society relies on donations to continue its existence and their efforts in support of originalism and protecting constitutional principles can in no way be corrupted. Fact is, the people funding these groups want only one thing…the selection of competent originalist judges and justices that will faithfully follow the letter of the law without venturing into legislative functions into which they should not delve.

Senator Ted Cruz followed shortly after Senator Whitehouse and blew the charts away to the far corners of the room (figuratively, anyway) when he pointed out that among the top twenty big-money donors in the country, fourteen of the twenty gave entirely to Democrat candidate, three gave to both Democrat and Republican candidates, and the other three gave exclusively to Republicans.  Seems a bit like the pot calling the kettle black (and no, that’s not racist either).

Senator Klobuchar claimed that the seat belonged to Justice Ginsburg, but we all know the chair belongs to the taxpayers. Judge Barrett will be simply fine sitting there, too. The Senator also complained that Barrett was making it difficult for the committee to know what kind of justice Barrett would be based on her evasion of answers to direct questions about cases that had been before the Supreme Court.

Fact is, Barrett will be the sort of judge the founders intended. Again…woefully ignorant or she would have noticed that Barrett had already answered that issue a dozen times that day. Kolbuchar finished up with a claim that President Trump made a statement that was somehow improper and tainted the selection process. His statement suggested that it was important to have a nine-justice Supreme Court in place before any decisions regarding the election might come before the court. This is a real possibility, and the statement was both truthful and accurate in it’s predicate. That is important.

Senator Horono chose a particular case involving equal pay claims made by a female employee that filed her claim after the allowed statute of limitations written into the law and questioned why a justice would not find in favor of the female employee. Horono, again, demonstrates how utterly devoid of understanding she really is.

To here, the justices should find for the person who made the claim just because the “law is not fair.”  Judge Barrett, rightly, refused to answer (take the bait) but the fact of the matter is, Congress created the law with a 180-day limit on the filing of such claims from the date the employee received the deficient amount of pay for the first time. It is Congress, not the courts, that must alter the law to eliminate such a brief time period for the filing of such claims. It is not the courts’ discretion to alter the text of the law to mean something that Congress did not intend.  Not rocket science, just constitional originalism and textualism in the reading of the law…something I believe from her statements and history, Judge Barrett is fully prepared to follow…religiously (no pun intended).

If the rest of these hearings go about as fruitlessly as they did for the first two, there will be a number of Democrats that could not look their families in the eye without casting their vote in favor of Judge Barrett’s confirmation.  To do less would likely be met by a serious cold shoulder from any wife worth having.  That may sound harsh, but truth be told, if the filibuster were still in effect, I’d be worried.  As it is, our country should let out a sign of relief because Judge Barrett has these hearings fully under control at this point.  By Thursday evening, the whole thing should wrap up in spite of the Dems pathetic effort to undermine a brilliant, honorable, and learned lady who drips class in every way.  She will be a credit to the Supreme Court for at least a few decades.  America will the richer for her efforts.

Following the above speakers, I gave up, took two aspirin, and called it a day.  I think there were two more speakers left to go but one had to be a Democrat and I just could not take any more.   Meanwhile, Judge Barrett continued to go through this ritual without a single note in front of her while Democrats shuffled reams of paper searching for that all-important “gotcha” question they picked out last night.  Not that it would do them much good.  She’s got this!

Life Under Biden-Harris: From American Dream to American Nightmare