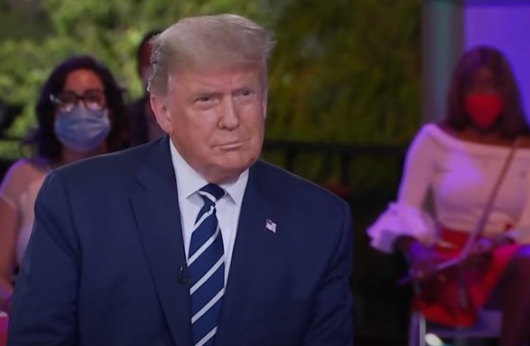 This has been a rather interesting election season. A WWE style debate between the Presidential candidates, Covid attacking Trump followed by a rapid and complete recovery (which has driven the left crazy) and most recently dueling town halls. What’s next? Maybe I shouldn’t ask that question!

The contrast between the town halls could not have been more stark. On NBC, Savannah Guthrie hosted the town hall with President Trump. The atmosphere was totally belligerent. She constantly interrupted the President and challenged him on almost everything he said. She spent the first several minutes obsessing over Trump’s being tested for Covid:

Your first positive test was Thursday, October 1st, okay? When was your last negative test? When did you last remember having a negative test?

Did you test the day of the debate?

Well back to the debate, because the debate commission’s rules, it was the honor system. Would be that you would come with a negative test. You say you don’t know if you’ve got a test on the day of the debate?

Did you take a test, though, on the day of the debate?

So you did you take a test on the day of the debate, I guess is the bottom line?

Just to button it up, do you take a test every single day?

Okay. And you don’t know if you took a test the day of the debate?

Then of course there was the questions about denouncing white supremacy which Trump AGAIN answered.

Savannah Guthrie: You were asked point blank to denounce white supremacy. In the moment, you didn’t. You asked some follow up questions. “Who, specifically?” A couple of days later, on a different show-

President Trump: Oh, you always do this.

President Trump: No, you always do this.

Savannah Guthrie: My question to you is-

President Trump: You’ve done this to me, and everybody-

President Trump: I’ve denounced white supremacy, for years, but you always do it. You always start off with the question. You didn’t ask Joe Biden, whether or not he denounces Antifa. I watched him on the same basic show with Lester Holt, and he was asking questions like Biden was a child.

Savannah Guthrie: Well, so this is a little bit of a dodge.

Is this woman NOT LISTENING????

President Trump: So, are you ready? Are you… Wait. Are you listening? I denounce white supremacy.

President Trump: What’s your next question?

Savannah Guthrie: Do you feel, it feels sometimes you’re hesitant to do so, like you wait a beat.

President Trump: And frankly, you want to know something? I denounce Antifa, and I denounce these people on the left that are burning down our cities, that are run by Democrats who don’t know what they’re doing-

Savannah Guthrie: All right, while we’re denouncing, let me ask you about QAnon…

Even in real time the left is lying about Trump. The internal polls must really be showing him gaining with blacks and Hispanics for them to keep asking this question as a gotcha moment. And notice how once he answers the questions she moves to the next group they want him to denounce.

The questions from the audience were a lot better than Guthrie’s (which should tell her something but she doesn’t have the self awareness to realize it). Questions about economy, immigration, replacing Obamacare, law and order and other issues that voters outside the stupid media bubble care about. But even here, Guthrie challenged Trump’s answers to the audience members. I think one of the best questions from a voter was about corporate taxes and it gave Trump an excellent opportunity to explain why he wants to keep taxes low across the board:

President Trump: It’s a great question. We’ve created more jobs than this country has ever created. We were up to 160 million jobs. We were never even close to that number. We were just hitting 160 million jobs, companies are pouring into our nation because of the tax rate, and if Biden comes in and raises taxes on everybody, including middle income taxes, which he wants to do, you will blow this thing, and you’ll end up with a depression, the likes of which you’ve never had. That’s what’s going to happen. We have something that’s really good. The reason we’re coming back so strong is because we built a very strong foundation. Companies are moving in. Car companies are moving into Michigan, into Ohio, into South Carolina, and North Carolina just today, so what’s happening is, they’re coming in because we reduced the taxes. Our taxes, our corporate taxes were the highest in the world, and now they’re among the lower taxes. They’re not the lowest, but they’re among the lowest. And what that means, is jobs, but also we’re doing a very big, and we’ve done a very big, middle income tax package. So if we get in, we’re going to do the middle income tax package, but it’s a great question. And if he comes along and raises rates, all those companies that are coming in, they will leave the U.S. so fast your head will spin. We can’t let that happen. Thank you.

And then there was this moment from a Russian immigrant:

Paulette Dale: I have to say, you have a great smile. You’re so handsome when you smile.

Oh no!! Somebody complimented Trump! They obviously didn’t vet her enough. Oh, wait just a minute. Did she say she was from Russia? A-Ha! She was a Putin plant! Now it all makes sense!

Another general point about Trump’s town hall. There was a black lady over Trump’s left shoulder that nodded many times in agreement with what Trump was saying. That just couldn’t stand and within hours the media had “unmasked” this obvious “deplorable”:

The identity of the overly agreeable “nodding lady” seated behind President Donald Trump at his NBC Miami Town Hall Thursday night has been revealed. Despite being in an audience of “undecided voters,” Mayra Joli, an immigration attorney who once declared herself Miami’s “master of selfies,” is actually a proven Trump supporter who ran for Congress on a pro-Trump ticket in 2018, the Miami Herald reports. After the rambling town hall, Joli greeted the president, telling him, “We have your back! You see, you see, you are the best,” which prompted the president to ask where she was from, according to a video she posted on her Facebook page. “I’m from the Dominican Republic, but I’m American, I’m an American.”

Isn’t is interesting that when they WANT TO the media can track down anything or anyone. But of course as far as the Biden family corruption goes they are like General Schultz on Hogan’s Heroes: “I know nothing, I see nothing”.

Over on ABC, George Stephanopoulos pretty much assisted the former Vice President when he needed to clarify a point or two. There was no hostile challenges to what Biden said. Pretty much a picnic for Biden. I watched the last 30 minutes after the Trump town hall. In that time they took at least 3 commercial breaks (almost after every question). It was very boring. Kind of like watching ‘Weekend at Bernie’s”. No, I take that back. Bernie was more animated than Biden.

Here’s the bottom line. Joe Biden could not handle a single minute of the type of confrontation that Trump gets from the media. We saw that in the first debate when he called Trump a clown and asked him to shut up.

Final thought: When they said the October 15 debate was canceled they lied. Trump debated Savannah Guthrie – and won. So he is now 3-0 for the 2020 election season having defeated Chris Wallace, Guthrie and Biden.