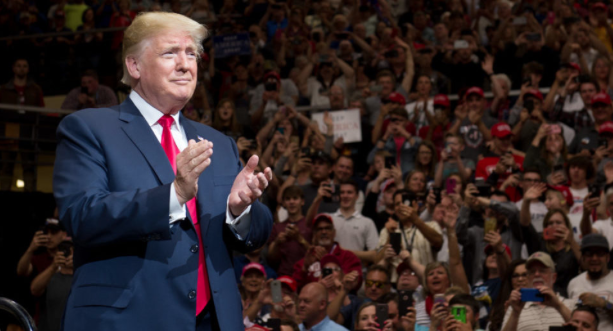 Some conservatives are downright gloomy over Trump’s re-election polls. On average, he’s running about 7 to 9 points behind nationally, and 4 or more points behind in just about every battleground state. I hear a lot of, “it’s not over till it’s over,” and “don’t give up the ship.”

But Gallup just delivered up some really great news. Since Ronald Reagan, Gallup has been asking people if they are better off today than they were 4 years ago. In 2012,45% of people responded that they were better off. In the election of 2004, about 47% said they were better off. Obama and George W. were re-elected with solid margins on those numbers.

In their latest study, Gallup reports that 56% of Americans say they are better off today than they were when Trump was first elected. That, mind you, is with a global pandemic, closed economy, high unemployment, riots in the streets, and a poisonous media narrative that claims every thing that goes wrong, goes wrong because of Donald Trump.

Joe Bidenhad a message for the folks who thought this. He said their memories weren’t very good. WOW, talk about kettles and blackened pots. Joe can’t remember his sister’s not his wife, but he blames Americans for memory-loss?

After disparaging their forgetfulness, Joe went on to say that if that’s how voters feel, then they probably shouldn’t vote for him. Finally, something Joe and I can agree on. You win Joe, we’ll vote Trump … wait, so you don’t win.

The truth is, I believe most Americans remember exactly how well off they were under Obama-Biden, and now the entire country is doing better thanks to the incredible job Trump is doing as President. It helps that we finally have a president who has kept his promises and actually reduced taxes, cut regulation, and put America first.

The Gallup poll isn’t the only good news either.

There are these incredible rallies where tens of thousands of every-day Americans sit in bleachers and listen to the president they love and would walk across hot coals to re-elect. Biden’s meetings on the other hand? Not so much. One news announcer reported the other day, there were more Trump supporters at Biden’s rally than there were Biden supporters. It was on a corner opposite a gas station and the Trumpers needed a fill-up.

When you consider Biden’s insults against voters, that shouldn’t surprise anyone. Not only did he tell people who thought they were better off that he didn’t want their votes, when he was asked whether voters were entitled to know his stand on court packing before the election, his response was an insulting, “NO, THEY ARE NOT!”

Whoa Joe, hold your stack. I thought the whole point of election campaigns were to let voters know what they’re in for if they elect you. My Bad!

Remember when Joe was asked whether his son had ever discussed his involvement with Burisma, the biggest energy company in Ukraine? Joe said, “No, never heard anything about that.” And I thought Darth Vader was estranged from his son, Luke Skywalker.

How does your VP father take you on an official trip aboard Air Force 2, fly you to Ukraine, but on the entire trip home you never mention that between strip clubs in Kiev you landed a part time job making over a million a year with a company you know nothing about, based in a country you’ve never visited before, working in a field you’ve never been involved with? Really?

And it wasn’t even the only time that happened. After another official Air Force 2 trip, this one to China; Hunter Biden landed a 2nd sweetheart deal managing more than $1.5 billion. That deal was worth millions to him personally — all courtesy of the Chinese Communist government in Beijing. Again, Biden the younger had zero experience managing investments. And again, according to Joe, the subject never came up during the long pan-pacific flight home.

Now the jig is up because Hunter apparently forgot he’d left a laptop at the repair shop. The laptop which was registered to the Beau Biden Foundation, must not have meant much to Hunter because he never picked it up and never paid the bill. Eventually, the owner of the shop took possession and found hundreds of emails — at least some of which indicate Joe knew a lot more than he was saying.

I imagine that as I pen this, Hunter is wishing he’d not been so cavalier with the laptop. Turns out that not only were their a number of potentially incriminating emails, there were also more than a few photos of women “in flagrante” as the French say, and some rather unflattering photos of Hunter himself including one that showed him in bed sucking a crack pipe. But wait, after Hunter was tossed out of the U.S. Navy for drug use, Joe claimed he’d seen the errors of his ways and was pursuing the path to reform.  I guess the tooth fairy put it there.

Back to the more damning evidence though, emails from characters involved with Burisma actually thanked Biden “the younger,” for various introductions to Biden “the much older” who happened to be Vice President at the time.

We also know that Joe Biden while in Ukraine told government leaders they had 6 hours to fire a prosecutor who was looking into Burisma or Joe would cancel a billion dollar subsidy to that country. Now, where have I heard “quick pro quo” before?

As bad as Joe’s gaffs are, he apparently remembered that demand of the Ukrainians pretty well because it was just a months ago he was bragging about it. A marvel given he doesn’t recognize people, doesn’t know what he’s running for, and can’t remember what state he’s campaigning in. While I would not wish such mental decline on anyone, that alone should disqualify him from becoming Commander and Chief. The chance he’d make a serious mistake in an important meeting, or be unable to make decisions on calls with enemies or friends, is reason enough to vote against him.

Ladle on top his penchant for deceit as we’ve seen in this and previous campaigns, and his willingness to help enrich family members at the expense of U.S. interests, the idea of a Biden presidency is surely abhorrent.

Hopefully, despite attempts by Twitter and most in the media, to hide his corruption, the American people are starting to see the truth. It’s striking how many homes in my neighborhood are happy to post yard signs for every liberal on the ballot, and every Marxist cause imaginable, but are reluctant to advertise their support for Biden-Harris.

Like Gallup’s finding that most people think they’re better off now than 4 years ago, and the enthusiasm on display at Trump rallies, I think the lack of Biden-Harris paraphernalia is a major tell that many on the left are taking a pass on the presidential race. Good news for the good guys.

Oh, and one other statistic that cuts against the dominant theory that Biden is way ahead, consider the minority vote. Some polls are showing that roughly twice as many black voters are supporting Trump as supported him last time. Other polls show 35% or more of the Hispanic vote going for Trump. If Trump wins because of minority voters, that will undoubtedly cause liberal heads to explode.

As far as I can tell, this race is a lot tighter than the polls claim. We’re at least within the margin of error. If that’s true, then this election will look a lot like the one in 2016 which leftists literally hollered at the sky, wailing to a God they don’t believe in.

If that happens again, expect liberal journalists to jump from windows, progressive politicians to blame America, and Trump backers to party like it’s 2016, but better.