I love the propulsive spirit of Rock and Roll.  It is one of the many heartbeats on my American jukebox.  Yet, what moves my heart is not always that which moves my hips.  50 plus years after it was recorded, the opening notes of The Rolling Stones “Gimme Shelter” still give me a premonitory chill. Yet, it is Stones ballads like “Slipping Away, Wild Horses and You Got the Silver” that capture my heart.

Jimi Hendrix’s apocalyptic guitar sound captured my imagination as a guitarist in songs such as “ House Burning Down and All Along the Watchtower.” Yet, it is Hendrix’s ballads, such as “ Castles Made of Sand and Little Wing,” that inspire my fingers. 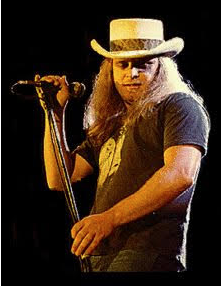 As with the Stones and Jimi, the same listening principle also rings true for me in the ballads written by Lynyrd Skynyrd’s original singer, Ronnie Van Zant. I greatly appreciate Skynyrd’s rockers, such as the spectacular “That Smell,” but it is the ballads of Lynyrd Skynyrd that remain part of the monthly soundtrack of my existence.

Van Zant composed his songs in collaboration with various key band members such as Guitarists, Gary Rossington, Allen Collins and Ed King.  In addition, he collaborated with Steve Gaines, who joined in the last year of the original band.  October 20, 1977, ended Gaines’ great potential as a Guitarist, Singer and Songwriter.  More about Gaines later.

I cannot count myself as an ardent fan of Lynyrd Skynyrd during the heyday of their original lineup. In fact, my appreciation has only strongly taken root in recent years.  My increased interest started after watching the 2018 Skynyrd documentary by Stephen Kijak, “If I Leave Here Tomorrow: A Film About Lynyrd Skynyrd.”  Also influential was the Marc Ribowsky book, “Whiskey Bottles and Brand New Cars.”

Seeing Kijak’s documentary was a revelation.  I found out many things about Lynyrd Skynyrd that surprised me and gave me pertinent information about the musical strengths of the original band.

Ronnie Van Zant was born on January 15, 1948.  He was raised in the Westside section of Jacksonville, Florida.  That area, also known as Shantytown, was a rough, Blue Collar area to grow up in.  By the time he was in High School, Van Zant had a public reputation as a pretty good Baseball player who aspired to major league status.  He also had a broad reputation as a tough street fighter.

More telling was that he was privately filling up notebooks with poems written mainly about sports that he would share with only a few close friends.  He was also starting to play a little guitar and occasionally dabbled on drums and piano from time to time.

It was during a high school baseball game, while Van Zant was playing for a Sandlot team known as the Green Pigs, that he met two future band mates Guitarist, Gary Rossington and Drummer Bob Burns.

This meeting was initiated after Van Zant beamed Burns with a fly ball. After a brief conversation, they realized they all loved to listen to and desired to play music.

By this time Van Zant had actively started singing and he joined Burns and Rossington in the Burns family garage where they performed a  version of the R&B song, “Time is On My Side.”  It was 1964. For the next decade, and beyond, Lynyrd Skynyrd demonstrated a work ethic that was admirable.  Rehearsing, at times, for 10 or more hours a day in a funky, non-air conditioned dwelling that was affectionately known as “Hell House.”

Most Rock bands from the ‘60’s-70’s had two guitar players that would play well with each other, like the Allman Brothers Duane Allman and Dickey Betts.  Lynyrd Skynyrd, at it’s greatest moments, had a three guitar orchestra.

From the first album on, the three guitar players of Lynyrd Skynyrd each fulfilled a separate sonic reality. The two original guitarists, Gary Rossington and Allen Collins, played like one guitarist with four individual hands. The addition of former Strawberry Alarm Clock Guitarist, Ed King, gave them a three part, very distinct approach.

Before they entered the studio, all guitar solos were strictly rehearsed.  In addition, all the song lyrics, composed by Ronnie Van Zant, were composed by him in conjunction with the rehearsal of the material. Nothing was written down in the standard route of most lyricists or songwriters.  The lyrics of the song were retained by the retention of the groove of the song by the band.  Lose the groove, lose the song.  The band was so well rehearsed that not many songs were lost.

Another great treasure of Skynyrd is the piano playing of Billy Powell.  Powell, was classically trained and he provided a rich counterpoint to the three guitar army of Lynyrd Skynyrd. The bass playing of Leon Wilkerson was melodic, rhythmic and constantly moving.  The bottom end was ultimately propelled by the powerful drumming of Bob Burns and later on, Artimus Pyle.

Ronnie Van Zant was a powerful vocalist.  His vocal influences ranged from Gregg Allman to the Delta Bluesman, Son House, among others. He was also influenced by a Jacksonville musician, Shorty Medlocke, a Delta and Country Blues musician who was a seminal musical influence in the area.  Medlocke also contributed greatly to albums by the underrated band, Blackfoot. Blackfoot’s personnel included Shorty Medlocke’s grandson, Rickey Medlocke, who is also an active presence in the current Lynyrd Skynyrd.

As I wrote previously, it is the ballads of Lynyrd Skynyrd that move my heart. Every album had at least one sterling ballad featured as a centerpiece, along with variations on the Blues. Not ignoring the anthemic power of songs like, “Free Bird and Sweet Home Alabama,” but their ballads and Blues are quite special to me.

I truly love a litany of their ballads that include, but are not limited to, “Tuesday’s Gone, Simple Man, I Need You.”  My favorite of the ballads of Lynyrd Skynyrd is an elegiac piece called, “All I Can Do is Write About it.”  This song and pieces like “Saturday Night Special and That Smell,” demonstrate a social awareness and sensitivity that was broader than Ronnie Van Zant’s public image

October 20, 2020, regrettably marks the 43rd anniversary of the plane crash that took the lives of three members of the Lynyrd Skynyrd band and three members of their crew.  On October 20, 1977, en route to Baton Rouge for a concert, the band’s chartered Convair-CV-240 plane crashed in Gillsburg, Mississippi.  Killed in the crash were Lead Vocalist Ronnie Van Zant, Guitarist Steve Gaines, older sister and Back-Up Vocalist, Cassie Gaines. Additionally, Assistant Road Manager Dean Kilpatrick, Pilot Walter McCreary and Co-Pilot William Gray, like the others, were killed on impact.

Among the injured in the October 20th crash were Bassist Leon Wilkerson, Guitarists, Gary Rossington and Allen Collins, Pianist Billy Powell, Drummer Artimus Pyle, Singer Leslie Hawkins and various members of the road crew.  After a detailed investigation it was determined by the FFA that pilot error was the cause of the crash.

Additionally, at the time of the crash, the band was being managed by Peter Rudge.  Rudge had previously represented The Rolling Stones and The Who.  Why he allowed Lynyrd Skynyrd to travel in a 1947 misfiring Convair is still a mystery to music historians such as myself.  Not paying attention to these sort of details killed six people and injured many more.  Allegedly, there were various lawsuits against Rudge in the aftermath of the crash by the families of the victims and the injured survivors.

Under the great guidance of original Skynyrd guitarist, Gary Rossington, Lynyrd Skynyrd reformed a decade after the crash with Ronnie’s brother, Johnny, fronting the band on vocals. The tradition established by the original band continues proudly.

Like many great musicians from the American South, Ronnie Van Zant was a dichotomy.  Rocker, street brawler, road musician, poet, gentleman, pick a day, pick a term.  Van Zant was maturing greatly towards the end of his life, especially with the birth of his second daughter, Melody.  He treated guitarist Steve Gaines like a little brother and Gaines contributed greatly as a musician, songwriter and singer in his short stint with the band.

If he had been able to have a longer career I could visualize Ronnie Van Zant doing everything from being part of the Outlaw Country movement to playing straight Country Blues.  He was far from being a simple man and his shadow still looms large in the music of America.