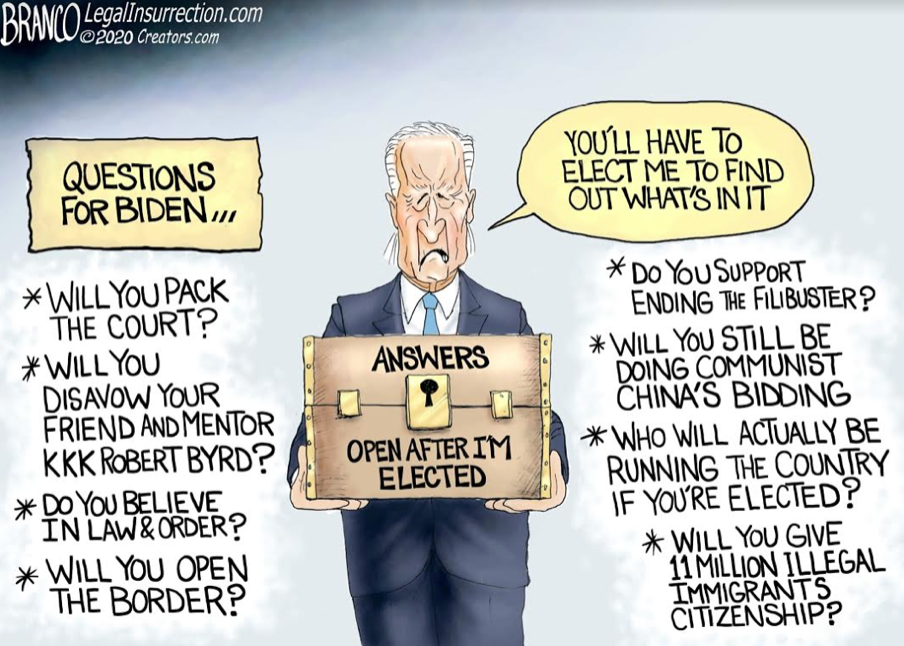 By the time of the 2016 elections, we had seen eight years of incredible change in our country. Obama and Biden led the charge to dismantle our military, all the while further engaging us in conflicts in the Middle East. They had given the world’s number one sponsor of terrorism in the world, Iran, $165 billion. This, after Iran took 10 US sailors hostage, and released photos of them on their knees with their hands tied behind their back. Obama and Biden had nothing to say.

The Obama-Biden duo also signed repulsive trade agreements that sent American jobs to China, Mexico, and other places around the world. They also tried of lock American businesses and consumers into economy crushing deals with the United Nations and the Paris Climate Accord. Those deals cost America billions. If Trump had not extricated us from the Paris Accords, it would also have cost us many millions of jobs. Obama-Biden made matters worse when they approved regulations whose only beneficiaries wereunions that have a vested interest in projects taking longer and costing more.

Their poisoning our economy didn’t stop with foreign trade deals and dumb climate accords either. They raised taxes, imposed unfair – often illegal, regulations – and forced businesses to submit to onerous labor rules. As a result, the economy grew at a snail’s pace under Obama Biden. The only reason unemployment numbers didn’t reach historic highs is because so many people had given up looking for work and bowed out of the labor force all together.

But the Obama-Biden economy will look like a firecracker compared to the economy Joe Biden and Kamala Harris will give us if they win the election.

Already Democratsare threatening riots, looting, and carnage if Trump wins. They don’t care if his victory is 100% legitimate, they plan to take to the streets. The terrorist group Black Lives Matter are threatening to burn down any home that flies an American flag. They want police departments, as we know them, abolished. And they want whites to pay massive reparations for something that happened 175 years ago which no living human being alive today had anything to do with.

America as we know it will once again be over-run with illegals from every corner of the globe in search of benefits funded by America’s taxpayers – free healthcare, free education, housing subsidies, food stamps, welfare and more. Job creators will move their capital to other countries to escape the Biden-Harris taxes, regulations, and bureaucracy. Biden’s promise to encourage unionization in every business will make that capital fly even faster. What the Democrats haven’t figured out is that investor capital follows profits. If America isn’t profitable, investors will leave in droves.

All the jobs Biden and others have promised us from the Green New Deal won’t save our economy either, they can’t. The cost of alternative energy sources is already too high. Ladle on the costs of unionization and they’ll shoot through the roof. It won’t matter whether you have the skills, if you don’t have a union card, too damn bad.

Manufacturing in America will also take a huge hit. The same costs and regulations that drove manufacturing overseas to China will make a big come back under Biden-Harris. That can only drive the manufacturing jobs created under Trump off shore to China, India, Vietnam and other low wage or slave labor countries.

And while China whispers in Hunter Biden’s ear about the opportunity to make even bigger money, they will demand Biden repeat the Obama Biden formula of tearing down our military.  China doesn’t want any interference from America in the East China Sea as they build their enormous military complex and extend their power throughout Asia.

A return to an even more radicalized Obama-Biden economic program has other dire implications as well. You can expect your 401K or whatever retirement account you’re depending on, to take a giant leap off the bridge. They’ve already talked about taxing capital gains at a higher rate. But that’s just the downpayment. Their economic policies will cripple businesses, drive investment capital off shore, and lead to a far weaker currency. The result will be a sluggish stock market and dwindling savings.

Joe and Kamala also want to control your healthcare, so whatever their plan, expect it to run as well as your local DMV: hurry up and wait!

It’s bad enough Joe has dementia, but he also lacks any real principle. He won’t tell us what policies he will pursue when he’s elected either because he doesn’t know himself or because he knows they won’t help him win the election. When he’s pressed, his first instinct is to lie.

Asked what he knew about his son’s involvement with Ukraine, he denied any knowledge at all. That even after the State Department warned both Obama and Biden of his conflict of interest in the matter. Was it his dementia, or just flat out dishonesty? Biden has a long record of lying, exaggerating, and plagiarizing.

Democrats have allowed city after city to deteriorate into riot-torn, burned-out war zones. The vandals and thugs from Black Lives Matter and ANTIFA have sworn to continue burning, looting, destroying, and killing if Donald Trump is re-elected.

Democrat elected officials endorse the violence when they refuse to allow law enforcement to stop it. Citizens across America are being denied their right to life, liberty, and personal property. It’s an outrage. But it’s a policy Biden and Harris encourage when they talk about “redirecting” funds intended for police departments, when they refuse to condemn repealing bail requirements, when they say America is “systemically” racist and anyone who disagrees is proof of racism. They support the violence because they believe it helps them with voters, they’re not above using terrorists like BLM and ANTIFA to help them win.

If we want to take back our streets, restore law and order, and reclaim our chance to lead happy and productive lives, we have to stand up to the thugs who think they can intimidate, assault, and beat us without repercussions. We must give law enforcement the ok to do their jobs – protect and serve.

When you can’t go to dinner without a thug taking over your table, yelling in your face, and threatening you with violence if you don’t give the Marxist clinched-fist, things are out of control. To change things, it will take more strength than Joe Biden has ever shown. It will take Donald Trump’s re-election.