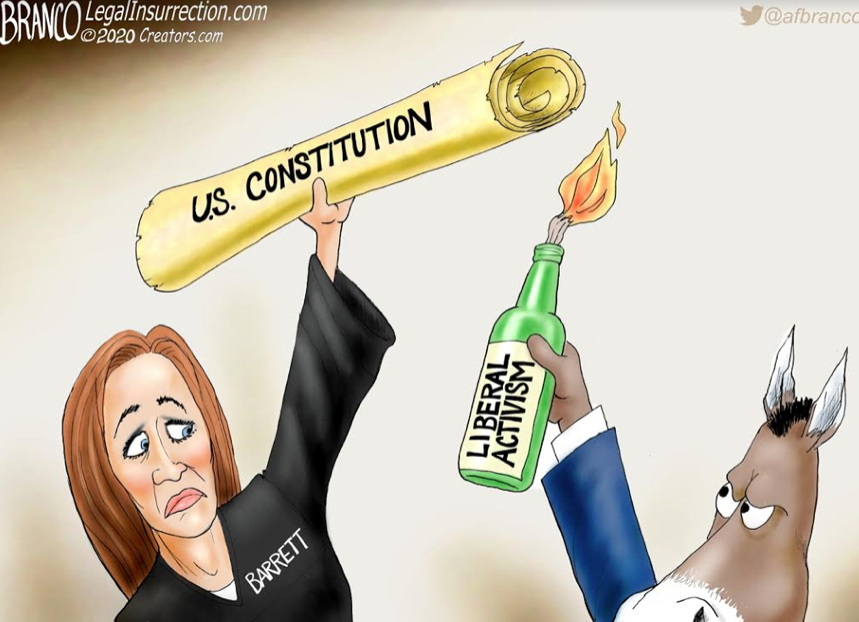 As an American citizen, who actively pursues the study of our history, it makes me quite angry to see the facts of American history manipulated to further a political or a personal agenda. It makes me even angrier when a public or political figure tells an outright lie and promotes it as a historical fact.

Let us consider some of our recent history. Democrat Vice Presidential Candidate, Kamala Harris, stated the following when she was recently debating Vice President, Mike Pence.

In regards to the nomination of Judge Amy Coney Barrett, Senator Kamala Harris wove a tale as written from a self penned, cliff-note version of history:

“Mr. Vice President, I’m speaking. I’m speaking. In 1864, one of the, I think, political heroes – certainly the president, and I assume to you as well, Mr. Vice President – is Abraham Lincoln. Abraham Lincoln was up for reelection, and it was 27 days before the election, and a seat became open on the United States Supreme Court. Abraham Lincoln’s party was in charge, not only in the White House, but the Senate. But honest Abe said it’s not the right thing to do. The American people deserve to make the decision about who will be the next president of the United States, and then that person can select who will serve for a lifetime on the highest court of our land. And so Joe and I are very clear: the American people are voting right now. And it should be their decision about who will serve on this most important body for a lifetime.”

Senator Harris actually perpetuated a lie, or she “misspoke,” in this recounting of the history of Abraham Lincoln. The reason that Lincoln did not immediately fill the Chief Justice seat vacated by the death of Chief Justice Roger B. Taney is quite simple: The Senate was not in session at the time of Taney’s death in October of 1864. After Lincoln was re-elected, he nominated Salmon P. Chase, who was a strong anti-slavery Jurist. Chase was confirmed in a 24 hour confirmation hearing in December 1864. Chase started serving as a Supreme Court Justice on December 15, 1864 and served until 1873.

I wish our current confirmation process was as efficient as the one afforded to Salmon Chase. The acrimony and partisan bad behavior in the recent confirmations of Justices Gorsuch and Kavanaugh were shameful. The confirmation hearings of current Supreme Court nominee, Judge Amy Coney Barrett, continues the pattern of partisan poison. It demonstrates the broad immaturity among some members of the current United States Senate.

In light of Harris’ Lincoln statement, my beloved wife, Sharon, shared some information about Chief Justice Roger Brook Taney that I found both fascinating and horrifying.

Taney was the fifth Supreme Court Chief Justice in the history of the court. He held that office from 1836 until, as stated, his death in 1864. However, the Supreme Court decision that truly secured Taney’s place in American history was the Scott Vs Sanford decision of 1857.

Dred and Harriet Scott were two enslaved people who filed for their freedom in the Circuit Court of St. Louis, Missouri in 1846. Thus began an eleven year odyssey that culminated in one of the most infamous decisions of the Supreme Court. The details are as follows:

Dred Scott was born into slavery in 1799. Scott was enslaved by the Blow family that moved him to Alabama and than to Missouri. With the death of his owner Peter Blow, in 1832, Scott was sold to a man named Dr. John Emerson, a United States Army Surgeon, who took Scott to Wisconsin territory, now present day Minnesota. Scott was held at Fort Snelling where he met Harriet Robinson, who was the slave of an Indian agent. Dred and Harriet married and had two daughters.  Emerson then “owned” both of them and their children.

In 1837, Emerson left the Scott family in Wisconsin and hired them out. He briefly moved back to St. Louis, then Emerson, moved to Louisiana, a slave State. In 1838, Dr. Emerson met and married Eliza (Irene) Sanford. Dred Scott moved to Louisiana.

In October 1838, Emerson, his wife Irene, and their enslaved workers moved back to Wisconsin. In 1842, the Army honorably discharged Dr. Emerson. Emerson again moved back to St. Louis, then to Iowa, where he died suddenly in 1843. The enslaved workers became Irene’s property.  Irene Emerson, (Sanford, now) moved herself and her workers back to St. Louis, where she lived with her Father. She hired out the Scott family, Dred Scott tried to purchase his freedom from Irene Sanford, she refused to do so.

The Scott’s knew that there was a doctrine in state courts that stated “once free, always free.”

This led to both of them filing Freedom Suits in 1846, as stated, in the Circuit Court of St. Louis. They knew if you were an enslaved person held in a free state, like the Wisconsin territory, you should be free even in slave states like Missouri or Louisiana.

In 1854, after being refused his freedom in the lower courts, Dred Scott appealed to United Stares Supreme Court.  The trial began on February 11, 1856. By this time, Scott had received public support from many abolitionists, including many high profile politicians and attorneys

The Supreme Court ruled against the Scotts, on March 6, 1857,  in a landmark decision that had three parts:

Scott was ruled against by seven Supreme Court Justices, including Chief Justice Roger B. Taney.  Taney wrote the Majority Opinion. Two Supreme Court Justice, Republicans, sided with Scott.  They were John McClean of Ohio and Benjamin R. Curtis of Massachusetts, both who wrote devastating critiques of Taney’s Decision.

So, in actuality, the Dred Scott decision is one of first historic examples of legislating from the bench. In addition, the practice of packing of the court came from the Democrat Party as typified by the Dred Scott Decision.

This decision created a firestorm in America. It is considered one of the leading causes of America’s Civil War as it angered American abolitionists.  Because of the notoriety of the case, Dred Scott was sold again.  He was sold this time by Irene’s second husband, a U.S Congressman and Abolitionist, Calvin Chaffee. Chaffee sold Scott back to the son of his original owner, Taylor Blow. Blow freed Scott and his family on May 26, 1857. Scott’s freedom was short lived, he died of tuberculosis on September 17, 1858.

The point of legislating from the courts occurred most blatantly in the third part of the Dred Scott decision. The Taney Supreme Court did not have the right to advise Congress in the legislation of states rights regarding slavery. Additionally, they did not have the right to determine an individual status for free States. The right for self determination, in regards to Slavery, was the right of the individual states, despite this misguided attempt by these seven Democrat Justices in 1857.

Ultimately, the 1857 Supreme Court deemed the Scott case to be a property issue with Taney’s written decision stating the Fifth Amendment protected slave owners as slaves were their “legal property.”

Senator Harris obviously had no clue of the truth behind her lie. The systematic racism of 1857 America was promoted and supported by the Democrat Party. The current Plantation Paternalism of the current Democrat Party perpetuates that nefarious legacy.

The Dred Scott Decision is considered to be one of the worst decisions ever rendered by the Supreme Court and is one of the best examples of legislating from the bench.

Now, in 2020, we must keep the Supreme Court as unencumbered as possible. Like the Dred Scott Decision, legislating from the bench or packing the court with partisan Justices is to the detriment of the Civil and Constitutional rights of all Americans. The Supreme Court, in my opinion, should make their decisions on a strictly constitutional basis and by rule of Law..

Playing loose and free with the Constitution is dangerous. The Supreme Court should remain bipartisan, aligned with no President and no Party.

The confirmation of Justice Amy Coney Barrett, a brilliant legal mind and a Constitutional Conservative, gives me some hope. President Trump nominated someone that follows the letter of the law and does not legislate from the bench. This cannot be said for all recent nominees.  Considering recent Judicial behavior, in recent years, perhaps it is also time for Justice Roberts and others to consider retiring. The Supreme Court should remain an interpretive body and not a legislative hindrance.