The Democratic Senatorial Campaign Committee, the DSCC, is charged with raising money for Democrat nominees they hope will give Democrats a majority in the U.S. Senate to permanently change our institutions and how we are governed.

Late Sunday afternoon, just one day before the final confirmation vote for Judge Amy Comey Barrett to the U.S. Supreme Court, the DSCC sent out an upbeat email to supporters, claiming that they could still “ruin McConnell’s plans to replace Justice Ginsburg!” 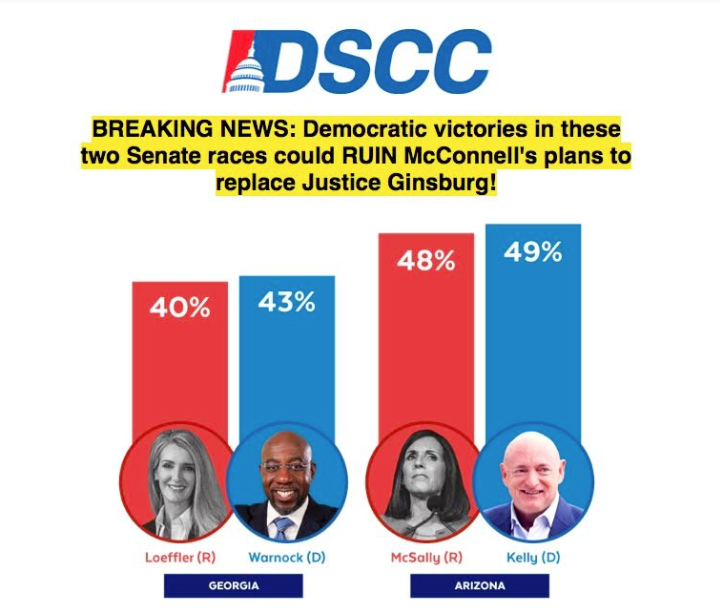 In their election fantasy, the DSCC claimed that two Democrats running for Senate seats up for special election, could be “sworn in EARLY and cast the DECIDING VOTES to stop Trump’s Supreme Court nominee!”

“That’s why Mitch McConnell and the entire GOP are unleashing an unprecedented ONSLAUGHT of attacks to crush Mark Kelly and Reverend Warnock over the next nine days.”

Leaving grammar and the actual fund-raising pitch aside, the DSCC is claiming that special elections in Arizona and Georgia, which will be decided following election day on November 3, will somehow be decided today to allow Mark Kelly to replace Senator Martha McSally of Arizona, and Raphael Warnock to replace Senator Kelly Loeffler of Georgia.

In both cases, this is simply not true. 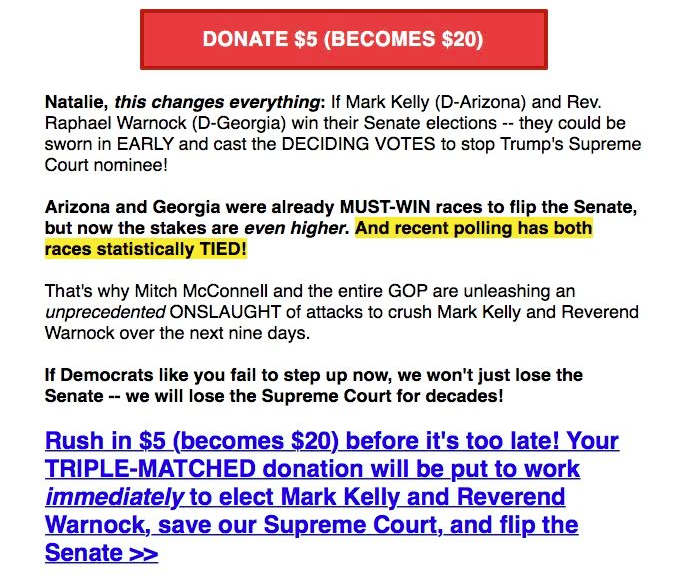 Voters in Georgia will conduct what amounts to a primary election on November 3 to determine the top two vote-getters for a run-off election on January 5, 2021.

Kelly Loeffler was appointed by Georgia Govenor Brian Kemp on Dec. 31, 2019 to fill the remainder of the term of retiring Senator Johnny Isakson. She is being challenged by Representative Doug Collins, a staple of the FoxNews set and a darling of the American Conservative Union.

Raphael Warnock is the sole Democrat, and as such, is polling in the upper 30% to low 40%s. As of today, polls showed none of the three candidates is polling at over 50%, meaning that there will indeed be a runoff election between the top two vote-getters.

Arizona voters face a somewhat different situation. Following the death of Senator John McCain on August 25, 2018, Governor Doug Ducey appointed former Senator John Kyl to fill the remainder of McCain’s term, which expired in Jan. 2023. But Kyl announced early on he considered himself a placeholder and resigned on December 31, at which point Governor Ducey appointed Martha McSally, triggering a special election to fill the remainder of McCain’s term.

Remember, McSally had just lost an election for Arizona’s other U.S. Senate seat to Democrat Krysten Sinema. So Arizona Republicans figured, it was her time.

Under Arizona law, if Democrat Mark Kelly defeats McSally on November 3, he will be sworn into the U.S. Senate on November 30 – still, a full month after today’s vote to confirm Amy Coney Barrett.

So you’ve got to wonder about those voters the DSCC is trying to reach. Clearly, the DSCC thinks they are clueless. But are they?

It would be interesting to see how much money the DSCC actually raised on this particularly lame email.

New York Times best-selling author and Nobel Prize nominee Kenneth Timmerman has published 11 books of non-fiction and four novels, available at amazon.com and through his website, kentimmerman.com. His latest book is The Election Heist.

Can Politics and the Classroom Be Mixed?