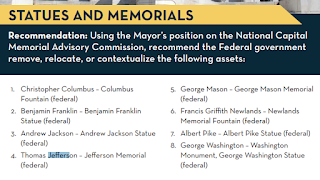 Election Day is coming up and Republicans need to make a better case than they have until now. The Republican case suffers from overcomplicated arguments, references to things that non-conservatives aren’t familiar with, and mixed messaging on key areas like the pandemic and crime.

The core argument must be that the key crises are caused by Democrats and being managed by Republicans.

1. The pandemic’s worst death tolls took place in blue states and cities like New York. Republicans have failed to seriously challenge Cuomo’s record which is a huge mistake because, aside from Biden considering him for Attorney General, Cuomo is prepping for a potential future presidential run.

But the bigger issue is that Republicans have failed to properly place blame for the death toll.

Every time Democrats bring out that 200,000+ number, Republican messaging should have been that the death toll was caused by Democrats and based out of Democrat states and cities before it migrated.

If any particular element leads to a Republican defeat, it will be this one.

Republicans have done a better job of managing the pandemic than Democrats. And if Republicans at the national level don’t attack Democrat mismanagement of the pandemic, they’ll lose. If Republicans had devoted a fraction of the effort expended on Burisma to the death tolls, especially of nursing home patients in blue states, this election would be a cakewalk.

Just like in California or Oregon, areas that aren’t in crisis will be forced into crisis mode.

Every single place in the country will be forced to lobby Washington D.C. and follow its orders.

It’s a simple message and yet Republicans seem incapable of communicating it at a national level.

3. Crime and violence are out of control because Democrats kicked off a wave of pro-crime decriminalization programs, freed prisoners, and supported race riots.

Republicans have done better on messaging here, but there are still too many mixed messages, especially when it comes to the 1994 crime bill.

It’s a traditional, simple, and effective message. Why aren’t we hearing it?

4. The last time Biden was in charge of a recovery, the country spent eight years in a recession.

Republicans have done better on economy messaging, and President Trump, in particular, came out strong at the last debate, but there’s still often a lack of a simple, coherent message.

The public’s core concerns on the pandemic, the economy, and crime, three leading issues, are going to decide the election.

Scandals, like Hunter Biden’s laptop, can help, but most people are going to vote based on their own interests. And people’s interests are raw and close to the surface now. All the stuff that makes for good social media churn, adds value, but people worried about their jobs, their businesses, and their lives are only going to care so much about it.

The Democrats trashed the country. Digging up their dirt weakens them, but it’s not going to stop them.

Republicans are being held back by internal conflicts, especially when it comes to the pandemic, but these conflicts can’t get in the way of delivering a straight and simple message to undecided voters.

Internal conflicts should stay internal. When they spill over into mixed messaging, then Republicans sound incoherent or untrustworthy. You don’t win elections by dismissing people’s concerns, ask Hillary how well that worked in 2016, but by tapping into them and offering an answer.

There’s only so much time left for deploying focused, coherent messages.

5. If Democrats take the Senate and the White House, they’re not just going to pack the Supreme Court, but the House and Senate by adding D.C. and Puerto Rico as states. And then they’re going to Californicate the country and transform it into a one-party state run out of D.C., San Fran and New York.

In light of that, losing the Senate should be unacceptable for anyone who doesn’t like that scenario.

It doesn’t matter how bad some Republican Senate candidates are. Anyone who counsels having Democrats take the Senate as a valid “conservative” option is no different than the Never Trumpers who insist that “principle” demands that President Trump lose so the Republican party can be rebuilt.

The cost of Republicans losing the White House and/or the Senate is the end of America.

No Republican Senate member, no matter how awful of a RINO he might be, is worse than that.

Greenfield: The Bidens Cashed In While a Pennsylvania Hospital Couldn't Care for Patients