On a summer Sabbath day, Elie Rosen, President of the Jewish Community of Graz, spotted a suspicious man hanging around the synagogue. The synagogue had recently been vandalized and the man had a backpack full of rocks that he was about to start throwing at the synagogue.

After the synagogue had been vandalized a few days earlier, Rosen had warned that in the Austrian city, “we are dealing with a stronger left wing and anti-Israel antisemitism,”

Rosen’s concern was understandable since some of the graffiti smeared on the wall around the synagogue read, “Free Palestine” and “Our language and our country is Palestine”. A second attack by the same perpetrator on the Sabbath Eve had smashed the synagogue’s windows.

The wall that the Islamic attacker had vandalized was made out of bricks from the ruins of the original Graz synagogue that had been destroyed by the National Socialists. The synagogue, which had been rebuilt only two decades ago, serves Graz’s tiny surviving Jewish community.

Austrian Jews know better than to take such slogans lightly. One of the worst episodes of antisemitic violence after the National Socialist period had been an assault by two PLO Islamic terrorists on a synagogue where a Bar Mitzvah was taking place. The terrorists had opened fire with machine guns and thrown hand grenades into the synagogue. A woman who had rolled on a hand grenade to protect the children died. A number of other congregants were wounded.

When Rosen asked the bearded man what he was doing, the vandal attacked him with a chair leg, and fled on a mountain bike. When the police caught him, he expressed no remorse.

The Syrian Muslim refugee justified his actions by citing his religion: Islam, and Islamic law. 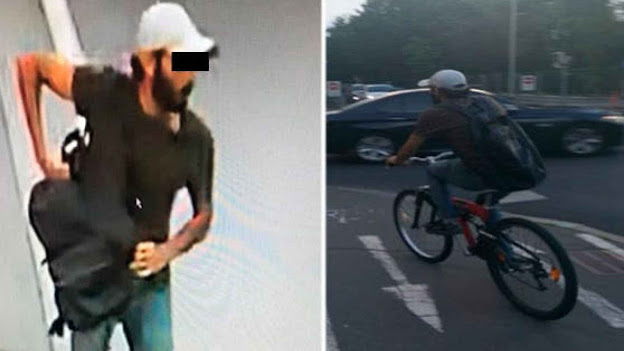 The Syrian refugee had come to Austria in 2013 during the height of the so-called refugee crisis by traveling through Turkey. The Islamic tyranny which had once besieged the Gates of Vienna with an army has dispatched a different kind of army against Vienna. And that army, sent by Erdogan, has often been welcomed with open arms by European countries like Austria.

When the migrant who attacked the synagogue came to Austria, he was granted asylum.

His capture didn’t just solve the mystery of the attack on the synagogue, but also an attack on a church and a gay club.

There were a total of 7 attacks committed by this one single refugee.

This has become the new normal in Graz, an Austrian city the size of Pittsburgh, which has seen a surge in violence.

There had been an arson attempt at a church in July when a nameless perpetrator threw burning newspapers into the building after smashing a window with a rock.

In 2015, a Muslim refugee had killed 3 people and injured 36 others when he ran his car into a crowd and then got out and began stabbing the survivors. The dead included a 7-year-old boy.

The mosques of Graz have been used to recruit ISIS terrorists. Some of the Islamic State’s killers died in its wars against its enemies, but others came back and are living in Graz.

After multiple police raids and arrests that involved as many as 800 officers, part of the network of ISIS and Al Qaeda recruiters was broken up, only to be reunited in prison.

A Muslim Brotherhood prison Imam from Graz who was brought in to help deradicalize some of the prisoners, instead plotted a jailbreak by the terrorists.The Brotherhood Imam had planned to have the terrorists pray in the yard as a distraction, and then attack the guards with shivs.

The arrested Syrian refugee adds to the growing Islamic population in Austria’s prisons.

Three years ago, it was estimated that a quarter of Austria’s prison population is Muslim. That’s a startling number in a country of almost 9 million with a Muslim population of around 700,000.

While Muslims make up less than 10% of Austria’s population, they’re filling up its prisons.

The situation is so bad that Austria’s top prison Imam wrote a book warning that the prison system was a breeding ground for terrorists and urged putting Islamists in solitary confinement.

One of those prisoners, an Albanian Muslim from Graz, has been accused of continuing to recruit for ISIS from prison using a smuggled smartphone and his Instagram account.

The terrorist, who is already serving a 9 year prison sentence for encouraging a 12-year-old boy to plant a nail bomb in a Christmas market in Germany, allegedly had links to Abu Tejma, the Islamist preacher in Vienna, whose large family had been living on welfare, while he drove a sports car and recruited some 160 Muslims,including teenage girls, to join ISIS,

“The blonde mouse, the Austrian, should be torn apart like a bag of crisps,” Tejma had bragged.

The Albanian Muslim from Graz had plotted his own attack on an American military base.

In prison, DERAD, a Confederation of European Probation project to deradicalize Jihadists, claimed that he was being successfully deradicalized, while he continued recruiting for ISIS.

All of this makes Austria in general and Graz in particular into ticking time bombs for terror.

A survey of Muslim refugees in Graz conducted by a professor of Islamic Religious Education at the University of Vienna found that about half of them had strongly antisemitic views.

“It was noticeable that more than half had internalized antisemitism as part of their religiosity,” Professor Aslan observed.

He also noted that a number of Graz mosques were controlled by the Muslim Brotherhood.

The Austrian authorities are trying to belatedly withdraw their asylum to the Syrian refugee who attacked the Graz Synagogue.

Antisemitic incidents in Austria doubled in the last five years, and while many of the perpetrators have National Socialist motives, the Jewish community’s report noted that, “Muslim anti-Semitism is conspicuous when it comes to incidents with a high threat potential.”

The Austrian government has announced that it’s dispatching uniformed and undercover police officers to protect the country’s handful of Jewish synagogues. But the antisemitic violence is part of a larger trend of Islamist attacks against both churches and synagogues. And against the symbols of non-Islamic values and political life.

The Syrian refugee believed his religion gave him the right to attack anything un-Islamic.

Susanne Raab, the Minister of Culture and Integration, urged a campaign to stop the overlap of “political Islam” and antisemitism. But that overlap is innate to Islam.

“The act shows that you have to take Muslim anti-Semitism seriously,” Oskar Deutsch, the head of the Jewish community in Vienna, warned.

But truly taking it seriously would mean hitting the brakes on Islamic migration into Austria.

The attack on the Graz Synagogue is grimly symbolic. The synagogue had been destroyed in the year of the Anschluss by the country’s new National Socialist masters. It is ominously fitting for the country’s new invading theocratic Herrenvolk to once again target the synagogue.

A new Islamic fascism is rising in Austria. When the National Socialists marched into Austria, they were often met with cheering crowds of supporters. The cheering crowds who met the migrants marching into Austria are allowing a dark history to repeat itself one more time.