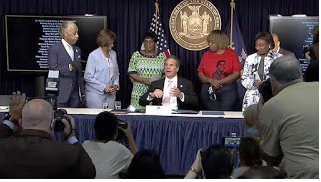 “I have to say to the Orthodox community tomorrow, ‘If you’re not willing to live with these rules, then I’m going to close the synagogues.’” Governor Andrew Cuomo told religious Jews.

His basis for the decree was a photo of mourners who weren’t practicing social distancing at a funeral. But the photo of a crowd of Orthodox Jews on Cuomo’s slide was from 2006.

It was a very different message than Cuomo’s condemnation of bigotry when he had insisted, “There is zero evidence that people of Asian descent bear any additional responsibility for the transmission of the coronavirus.” The new message is, don’t blame the Asians, blame the Jews.

Cuomo was picking up where Mayor Bill de Blasio had left off in his infamous tweet targeting Orthodox Jews. “My message to the Jewish community, and all communities, is this simple: the time for warnings has passed,” the New York City leftist boss had raged.

Medieval bigots blamed the Black Plague on Jews poisoning wells. Modern Democrats blame the Coronavirus on the Jews. Despite the plague of media narratives accompanied by photos of Chassidic Jews praying or mourning, there’s as little evidence for the latter as for the former.

Cuomo’s threat to synagogues was prompted by a supposed resurgence of the virus. De Blasio had already announced that the spike in the targeted areas would lead to school and business closures. Except that a number of those areas have African-American, Latino or Asian majorities. But instead Democrats and the media have focused in on the “Jewish” areas.

And even those “Orthodox Jews” areas are far from a homogenous monocultural community.

Chassidic Jews, a subset of Orthodox Jews, may stand out, but so do the Amish. So-called “chassidic neighborhoods” in Brooklyn are actually made up of the usual New York mix of African-Americans, Latinos, and assorted immigrant groups, including Muslim immigrants.

Coronavirus deaths among Asians in New York have been twice as high among whites and approaching five times as high among Latinos and African-Americans. New York City’s worst death rates were not in Borough Park or Williamsburg, but in a Bronx neighborhood, in East New York, in Flushing, Queens, in Far Rockaway, and in Brighton Beach.

None of those are Chassidic neighborhoods. Only one has a significant Orthodox population.

Nor are the highest positive rates in Orthodox or Chassidic areas. You have to get through five Queens neighborhoods before making it to Borough Park. And Borough Park, and most Brooklyn neighborhoods, except East New York, are far below Queens and Bronx neighborhoods when it comes to cases per population. Borough Park is only the 49th highest zip code in actual mortality rates, Williamsburg is in 79th place.

And yet the insistence that the outbreak is an Orthodox Jewish problem is ubiquitous. It pops up in the media and in rhetoric by top Democrats that stigmatizes religious Jews for the virus.

The Democrats who rose to denounce scapegoating of Asians have joined in the racism.

The media pumps out stories blaming the outbreak on Orthodox Jews with a cheerful disregard for facts or basic urban geography. The Associated Press rolled out an entire story blaming the outbreak of coronavirus infections on Orthodox Jews, but the only actual neighborhood that it offers statistics for is the “Gravesend section of Brooklyn”, a mostly immigrant area that is not home to a Chassidic community and whose Orthodox Jews are Syrian refugees, but is mostly associated with Italian-Americans, with large populations of Chinese and Russian immigrants.

The media won’t stop claiming that Orthodox Jews spread the virus because they make a convenient boogeyman for its hipster readers who despise traditional Judeo-Christian religions.

The New York Times, which has run the most articles blaming Orthodox Jews for the outbreak, has linked them to cultural lefty hobgoblins like opponents of vaccines and Trump supporters.

The power of othering is that all your hatreds and fears can be projected onto those who are different. And despite all the politically correct lectures on race and hate, the Times needs its own others to hate. The most obvious ‘tell’ is that when the Times writes about any other group, it quotes members of the community, but when it writes about Chassidic Jews, it turns to opponents and critics of the community who are happy to nod along to the negative coverage.

The Orthodox Jewish community has suffered from the virus, as have many other groups. It’s no more at fault for it than they are. It isn’t unique because more Orthodox Jews have come down with the virus, but because they make a convenient scapegoat for the failures of Democrat officials like Cuomo and De Blasio, for the blatant flouting of their rules by rioters and hipsters.

Chassidic Jews in particular are stereotypically ‘Other’ with strange garb, incomprehensible beliefs, accents, large families, and long beards, but they’re white enough that hating them is socially acceptable for progressives who can act out their xenophobia without feeling guilty.

Even before the pandemic, the media was eager to provide a platform for every special interest out to bash Orthodox Jews, fromthe YAFFED campaign by leftists against religious Jewish schools to opponents of circumcision to animal rights cranks campaigning against Kosher meat.

The new coronavirus antisemitism relies on the same stereotypes and slurs: Orthodox Jews are ignorant, superstitious, flout authority, and need to be saved from their backward ways. These are the progressive prejudices that permeate the media’s coverage of Orthodox Jews. And it’s part of the reason why Orthodox Jews are a Republican constituency in presidential elections.

Bigotry isn’t just about the pleasures of hate. It’s how those in power redirect blame for their crimes and failures, and a means for those who hate to gain a false sense of power and control.

Blaming the upsurge on an outside group creates a false sense of security for everyone else.

And when it’s no longer possible to pretend that the upsurge is limited to Orthodox Jews, then they can still be blamed for having caused it with their weddings, funerals, and their prayers.

Best of all, none of the newfound bigots will blame Governor Cuomo or Mayor Bill de Blasio.

The two top Democrats who mishandled the pandemic in the worst ways possible, while spewing lies, excuses, and smears at their serial press conferences, won’t be held accountable.

And that’s why every time things get worse, Cuomo and De Blasio will blame the Jews.