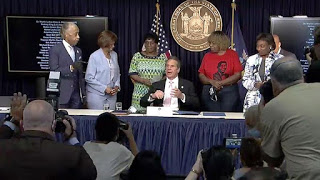 In June, Speaker Pelosi called for a national mask mandate forcing everyone in the country to wear masks. That same month, she tweeted a photo of a Congressional meeting with the brother of George Floyd, the ex-con whose death after a struggle with police led to nationwide race riots, and numerous injuries and deaths, while her nose and mouth remained uncovered.

In July, she ordered that any member of the House not wearing a mask be forcibly removed.

The media had spent the summer touting her “fashionable” and fashionably pricey masks from a small boutique in Virginia using fabric imported from Venice as the makings of a “style icon”.

In September, Pelosi was caught in a salon that was supposed to be closed without a mask.

The biggest mask hypocrites wear masks. As long as they think the cameras are on and people are paying attention. The moment they’re not signaling their virtue, the masks come off.

“Why don’t the NYPD wear masks? What signal does that send?” Governor Cuomo ranted.

The New York governor, whose order forcing nursing homes to accept coronavirus patients may have killed as many as 11,000 seniors, had previously accused President Trump of being “a co-conspirator of COVID” for not wearing a mask.

Meanwhile, at the height of the pandemic in New York, Cuomo signed an anti-police bill, closely flanked by Al Sharpton and police opponents, with nobody wearing masks.

The only people exempted from the Washington D.C. mask mandate were children under 3 and government employees.

“It’s simple: Wear a mask. Save lives. Stop the spread,” Bowser insisted. Except it wasn’t.

Even though Bowser’s order had exempted district and federal employees, she dispatched investigators to the Trump International Hotel over a photo of President Trump not wearing a mask.

Meanwhile Bowser could be seen at numerous press conferences not wearing a mask.

At a George Floyd rally, Bowser was closely surrounded by black nationalist activists wearing masks, while she had her mask down.

In Oregon, Governor Kate Brown rolled out a statewide mask mandate, declaring, “The choices every single one of us make in the coming days matter.” Then she warned, “If you want your local shops and restaurants to stay open, then wear a face covering when out in public.”

A few months later, she, her family, and her security detail were caught in public without masks.

Senator Dianne Feinstein had demanded that the FAA issue “mandatory mask requirements for all aviation employees and travelers”. Some months later, she was photographed walking through an airport without a mask on.

Governor Northam implemented a statewide mask mandate in Virginia, and was photographed without a mask, and in close proximity to people, while at the beach.

“Hypocrisy has become the hallmark of Ralph Northam and his administration,” Republican legislators stated in a press release.

The Democrat politician explained that he had left his mask in the car.

This sort of behavior by politicians has become so commonplace that it’s almost hardly worth commenting on. Politicians scold the public about wearing masks and then get unmasked.

The media has repeatedly been caught pulling the same stunt.

CNN’s Jim Acosta complained that President Trump wasn’t wearing a mask, only to be caught not wearing a mask. The same thing happened with CNN’s White House correspondent Kaitlan Collins. An MSNBC reporter, pretending to be outraged that no one at Lake Geneva on Memorial Day was wearing masks, had his shot interrupted when a passerby noted that the cameraman and half the MSNBC crew weren’t wearing them either.

Mask virtue signaling and outrage happens in front of the cameras. It’s easy to spot plenty of talking heads and their crews without masks when the cameras turn the other way.

Public health officials, from Dr. Fauci down to state officials have been caught at it too.

Masks are inconvenient and unpleasant. But they’ve also become a political and social symbol. Like most leftist social statements, it’s important to be seen practicing it, rather than to actually practice it. Masks, like going vegan, driving a Prius, or issuing a statement about this country’s structural racism, show that you are morally superior because you “care” about an issue.

And showing that you care means that you don’t actually have to care except when showing off.

Democrat governors imposed lockdowns on other people while they flagrantly violated them.

Governor Pritzker preached to Illinois residents about the importance of “staying home for the good of each other and the good of our state” while his family traveled to their horse farms and mansions in Florida and Wisconsin, and while workers from Chicago labored to construct his mansion in Wisconsin.

Why should the relationship of Democrat politicians to masks be any different than their behavior in getting haircuts and opening up the salons they closed, taking the vacations they banned for others, and eating at restaurants that people in their states aren’t allowed to do.

Governor Whitmer had banned just about everything in Michigan and then her husband wanted a boat for a Memorial Day jaunt, and inquired, “I am the husband to the governor; will this make a difference?”

People are used to political hypocrisy from politicians, but the politicization of everything has made political hypocrisy as ubiquitous as any other vice masquerading as a virtue. In a society that is losing its religion, politics offers identity and moral values to an irreligious country.

And the mask is one of the caring facades that the cult of correctness and awareness wears.

The difference between virtue and virtue signaling is the same as the contrast between a face and a mask. The former conveys the truth about a person, while the latter seeks to mask it.

In a society where virtue is what you wear, rather than what you are, the masks are everywhere.

Masks, like virtue signaling, can be put on and taken off again. They don’t require any meaningful commitment. Like the t-shirt with a slogan about the environment or a bumper sticker for a political cause, they can be easily removed once the virtue has been signaled.

Virtue is inconvenient to people who lack it. That’s why virtue signaling is better. And it’s also why those who preach about masks the loudest are the biggest mask hypocrites. Virtue signaling is for self-righteous hypocrites who want the facade of morality without the morals.

A virtue that they remove at will, that is visible, but can be taken off when no one who matters is looking, is the culmination of a morality that confuses caring with spreading awareness. Putting on a mask says that you care, when you really don’t, and it lets you take it off when the camera isn’t on you, when you’re among friends, and when the point that you care has been made.

Democrat politicians aren’t wearing masks because they care, but because they want to reduce caring to wearing a mask, so that no one asks uncomfortable questions about the thousands of elderly people who died in nursing homes that they forced to accept coronavirus patients.

When you peek behind the mask of caring, a murderous amorality is there looking back at you.

Saving lives is hard. Wearing a mask for the cameras is easy. The politicians and the people who spend the most time trying to confuse caring and masking don’t care about human life.

The tragic truth that the Greeks knew well is that the mask of virtue is no substitute for virtue.

Greenfield: The Godmother of Police Defunding Tried Restorative Justice, But He Kept Raping