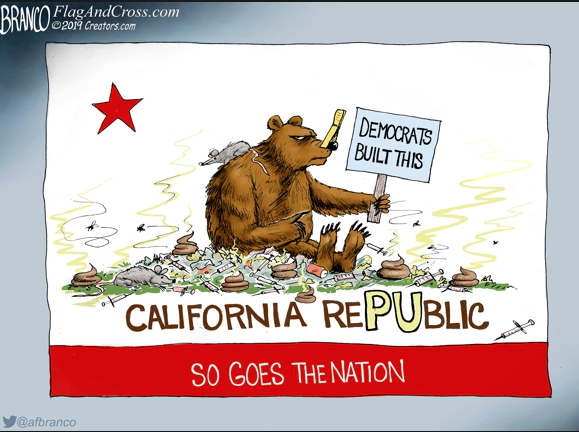 I once lived in California. Back then, I loved living there. I have dear friends who still live  there. Having said all that, I sometimes think, the best thing for America would be for the big one that turns Las Vegas into ocean front land.

Don’t get me wrong. I don’t wish Californians any personal harm. But this state is turning into the “People’s Republic of California.” It’s a petri dish for progressive experimentation. What’s happening there is exactly what I, and many others, have been warning will happen to the rest of America when socialists like Bernie, Biden, Harris, and AOC take power.

By 2035 no one in California will be able to buy a gasoline powered car, only electric cars will be sold. Too bad if a charging station isn’t near.

If you’re thinking of moving to California, and I have no idea why you would unless you look forward to collecting unemployment benefits.  Or, if you’re lucky enough to have a job, maybe you’ll look forward to paying for everyone else’s benefits, having the homeless live on your doorstep, and picking up the tab for the healthcare for illegal immigrants.

And, for those still living there come 2035 (only 14 short years away,) you’ll enjoy being forced to buy an electric vehicle — this dictate from politicians who can’t even produce enough electricity to run the air conditioners of current residents when it’s 110 degrees outside. Welcome to the third world where rolling blackouts caused by mismanagement and corruption are the rule. What in the world could they be thinking?

The progressive Democrats who run state government in California truly believe in socialism. Between state income and sales taxes, local and state fees, and regulatory mandates, residents pay the highest cost for government in the nation. But buckle your seat belts boys and girls, the legislature is close to forcing people to pay reparations.

These complete imbeciles believe people who did not suffer 200 years ago should be paid by people who were not alive 200 years ago for a terrible time in our nation’s history that occurred decades before California was even part of that nation. Make no mistake, this is just another way the left can force the redistribution of wealth.

It makes you wonder if California’s leaders just sit around smoking heaven knows what “re-imagining” new and more bizarre ways of taking the money of its citizens.

One thing’s for sure. The exodus from California will only grow as the quality of life continues to deteriorate. They’ll likely move in droves to places like Arizona, Idaho, Utah, Texas, and Montana – places previous liberals from California haven’t already screwed up like Oregon, Washington, and Nevada.

California was once a glorious place. The weather was grand, the highways were new and efficient, and the streets were mostly trash- and needle-free. I remember watching the Rose Bowl Parade on many a warm and sunny New Year’s Day thinking those from places where temps were hovering around zero and snow drifts were above window sills were likely calling their realtors and packing up to head west.

But it didn’t take long for things to change. Everything got ridiculously expensive, and everywhere got unbelievably over crowded. The air turned brown, the trash piled up, parking became scarce, and you had to learn at least some Spanish to get across town.

Those with real money could hire illegal immigrants from Mexico to serve as their maids, nannies, and gardeners for pennies on the dollar over hiring legal residents.

Graffiti started showing up on everything that didn’t move, and some things that did. It spread like the Chinese virus to every area of Southern California. Crime skyrocketed. Gangs took over whole neighborhoods. Drug-use spiraled out of control. Getting across the border and taking a low wage job – or launching a criminal career – was easier than ever.

It started when Ronald Reagan left the state house and Jerry Brown moved in. It got increasingly worse as time went on. Things turned to garbage, quite literally.

Now the entire state is a sanctuary state. Not one Republican serves statewide. Democrats control veto-proof majorities in both the State Senate and State Assembly. In most California election contests, the competition is normally between Democrats, and the biggest question is which Democrat is furthest to the left.  That’s because Jerry Brown and his leftist majority in the legislature imposed a new law that forces all candidates to run against each other in the primary, and the top two finishers, regardless of party, face off in the general election. It’s no longer top Democrat against top Republican. So much for the two-party system.

To me California is kind of like New York City. They were both once great places – fun, vibrant, exciting. Neither is any of those things anymore. Socialists now run both. They’ve destroyed people’s freedoms and quality of life. They’ve wrecked opportunities for growth – both personally and economically. They ruined the fun – unless you’re ANTIFA or BLM and your idea of fun is burning things down or blowing things up.

Tax payers are fleeing California – and, for that matter, NYC – and for the same reasons. Everywhere progressive Democrats take control, people suffer. Fortunately, in America, you can still choose your own destiny by voting with your feet and moving elsewhere. Hopefully, the voters checking out of California will leave their politics behind after the disaster their past votes helped create.