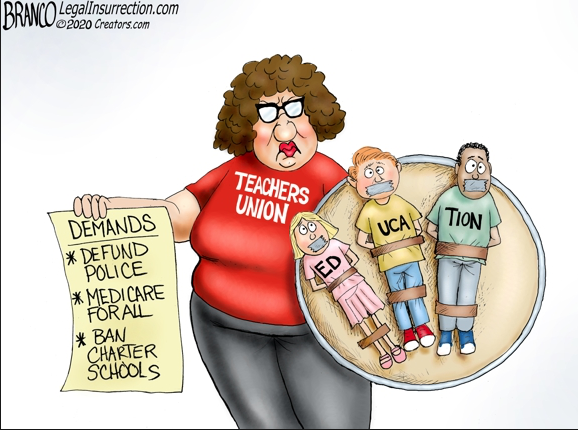 A recent series of four blog entries on the EdWeek.org website (here) ended with a segment that included extensive comments from teachers about keeping politics out of the classroom.  A large majority of them agreed that “politics” should be kept out, However,

What should give many of the contributors pause is just how many mentioned issues that tip any thinking person off that the contributor is left-leaning or progressive. Many do not even realize that they bring their views into the classroom because they believe that the students need to support the issues that, to them, are worthy of supporting. In order to “leave politics out of the classroom,” the teacher must guard against expressing any views on any subject that is controversial. After all, when statistically about 95% of teachers lean left politically, it becomes imperative that they train themselves to control their impulses to exert influence.  This is largely the reason there is so much resistance building against public schools – because they have become indoctrination centers, not centers of learning.

To bring up climate change as a significant threat to humans slants the student’s thinking before they have a chance to research and form an opinion based on evidence alone. To bring up Black Lives Matter in a favorable way is to immediately endorse an organization which is extremist by any measure.

The issues need to be presented in a neutral way:

“What are the good and bad things about BLM?”

“There is conflicting evidence regarding just how much mankind impacts changes in the earth’s climate. Research these different arguments and report your findings.”

Ensure resources available to students include ones that cover all sides of the issues being discussed or researched.

The best approach is to teach Civics, the Constitution (as written), the Federalist Papers (tough but worth it), and the role and structure of local and state government while saving the specific issues for a separate unit on, perhaps, debate or a survey of ideologies.

Without knowing how the system is supposed to work to protect individual freedom, students get the mistaken impression that government is supposed to do all the things it tries to do (which is a complete distortion of the purpose of government – that of protecting individual rights and freedoms). If you take issue with that, it is clearly stated as so in the Declaration of Independence – another document that should be studied by every student.

What many teachers have never learned or been taught is that the American system of government is already right in the middle of the spectrum of ideologies. It is neither left or right. Anarchy is the right extreme and monarchy/totalitarianism is on the left extreme. Everything else is to some degree between the extremes.

They and their students need to understand that with every law, rule, or regulation the govt creates, a corresponding degree of freedom is removed. Thus, the ideal politics are those that minimize laws within a framework that provides an adequate level of protection of individual rights and peaceful co-existence.  Most political arguments are just about where that line is drawn.

The constitution draws specific limits for the federal government that are often violated. The rest is state/local level choices that provide the ability of a citizen to offer local input to their elected representatives, and allows them the flexibility to move to another jurisdiction if the policies in one place are not to their liking. One size does not, after all, fit all.

Teach freedom. It is just that simple. Activism is what needs to be removed from our classrooms.

How many teachers know that the members of the House of Representatives are there to protect the citizens from the govt and the Senators are there to protect the states from the govt? Those were their original purposes. It has devolved over the past 120 years to what we have today. That is sad. How few teachers teach what the govt is supposed to be. Perhaps if they did, we would begin to fix what is broken.

Kenneth R. Timmerman: The DSCC is Clueless - or Downright Dishonest