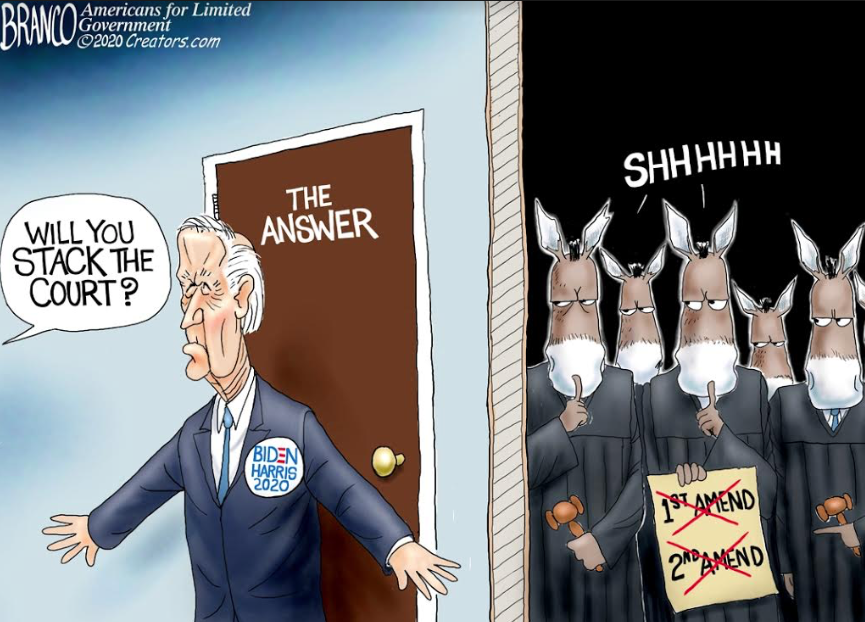 Biden claims he won’t raise taxes on anyone but the very rich. He also says he’ll repeal the Trump tax cuts on day one. He claims as well that he will spend $3 trillion plus without damaging our economy, hurting jobs, or increasing the deficit. That doesn’t count his Green New Deal, his public health care option, or free healthcare for illegals.

If Biden’s promises sound contradictory, it’s because they are.

The truth is that a Biden win means everyone’s taxes go up.

Everyone gets impacted a little differently of course. The wealthy will have a little more of their wealth redistributed, but those who get hit hardest are the middle class. Their taxes will go up as soon as the Trump tax cuts are repealed. But that’s just the beginning.

Biden will increase taxes on corporations beyond anything companies in other industrialized countries pay. That means lots of companies will relocate to lower tax countries. Lots of people will lose their jobs. And prices on products and services will go up.

Many of those companies who move will move to China. That means all the hard work the Trump Administration has put into breaking away from China will be lost. Biden and his team will invite China back to control our trade policies and influence our National Security.

Progressives won’t stop at packing the Court. Expect them to make Puerto Rico and Washington DC states. Maybe Guam and American Samoa as well. Anything to beef up their numbers in the Senate so they never again have to worry about Republicans winning; or Republicans ever being able to threaten their agenda.

Owning Congress won’t be enough, they’ll also do away with the electoral college. That means voters in California and New York will choose America’s presidents. Anyone who lives more than 20 miles inland from either coast will have nothing to say about who leads America.

Given the hubris of progressives who assume they own minority voters, progressives will fast track citizenship for the 20 million illegal immigrants in the U.S.who they’re convinced will vote overwhelmingly for Democrats.

For you who don’t believe it, just look at recent 5 to 4 decisions from the Supreme Court where the survival of our Republic is literally hanging by a thread — or one vote.

Had the progressives already gotten the chance to pack the court, I probably would not have been allowed to write or publish this op-ed. If I had, you might expect to join me in prison for reading it.

Another major court decision was the Florida recount case after the Gore/Bush election. The liberal justices sided with Gore to allow endless Florida recounts. After nearly 30 recounts in which Bush one every time, the 5 conservative justices on the court finally agreed to announce Bush the winner.

Conservatives are at a big disadvantage in the courts. Conservative judges believe in interpreting the law – and the Constitution – as it’s written. Progressives aren’t constrained by such things. Their judges are expected to create whatever laws leftists like.

Lots of other decisions could have gone the wrong way if progressives had already packed the Supreme Court.

When liberals are done, Republicans will no longer stand a chance to win back the Congress or the White House. We’ll never again get a justice on the court. Progressives will control it all ad infinitum. And even if by some fluke conservatives were to win, the constitution will be in such shambles it probably won’t matter any more.

If it was just Biden, it probably wouldn’t matter much. He doesn’t know where he is, or even what he believes. But he’s not Trump’s real competitor. The real threat is Kamala Harris and the leftists who control her. She’s rated the most progressive Senator in Congress, even more than crazy Bernie. She’ll control Biden. And when he’s gone, she’ll take over.

But she’s not the only one. Biden has said AOC will be instrumental in making the Green New Deal a reality. That’s a plan that has far more to do with economic redistribution than with climate change. AOC is proud of her socialism, and she’ll be aggressive in its implementation.

Biden has also told us that failed politician Beto O’Rourke will head up the initiative to take our guns. Biden doesn’t care that Beto wants to trample our constitution, he doesn’t even remember what it says.

If Trump wins, we have much to gain. If it’s Biden, we have far more to lose.

Kenneth R. Timmerman: The DSCC is Clueless - or Downright Dishonest

Conservatives and the Wrath of Social Media