If I were a writer of screenplays, I simply could not make this stuff up, not in my wildest dreams.

No one would believe a plot in which 90% of the media was so biased toward radical political views that the truth about damn near anything would never be reported. 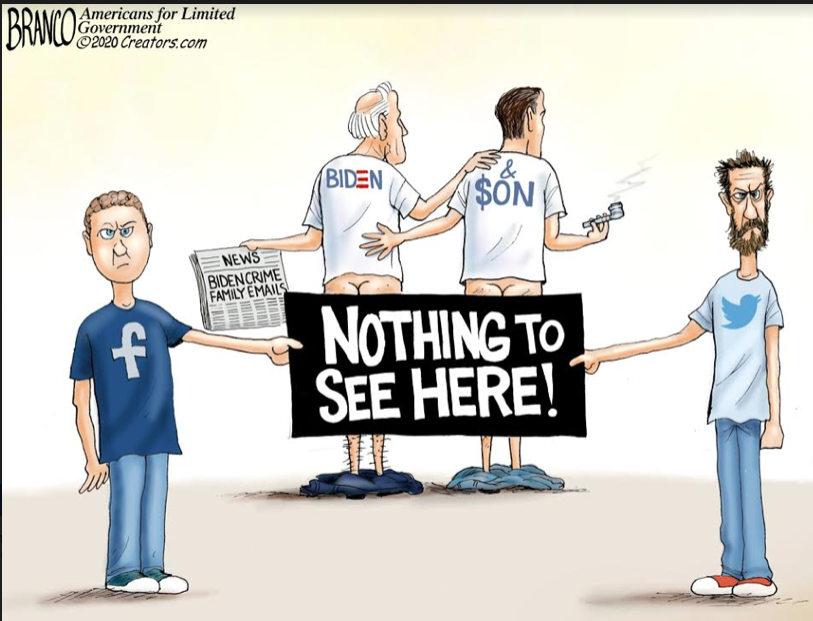 For example, in my screen play, the leading candidate for president, while serving as Vice President, takes his adult son who had been kicked out of the U.S. military, on an official Air Force 2 flight to Ukraine and returns with a part time job as a member of the board on an energy company that pays him more than $600,000 per year. This despite the fact he had no experience in energy or that his compensation far exceeds that of other corporate board members. Nah, it could never happen.

But then we learn this same Vice President father is the Ukraine point man for the the Presidential Administration, the company that hires his son is being investigated by an aggressive prosecutor, and that prosecutor is fired shortly after the Vice President insists he be fired.

On another official trip, the same Vice President, takes his son to China. The Communist government that runs China then hands this same wayward son $1.5 billion to manage for them — complete with lavish compensation and high commissions.

But in my screenplay, the media refuses to give any attention at all to these clear instances of abuse. Some suggest they’re minor issues and aren’t relevant to the Presidential election. “Wow,” you say. But in my screenplay that’s how low our standards have descended. Questions of character are no longer considered relevant to the election of a president if that candidate shares the media’s political bias.

I wonder sometimes if my “fictional” reporters would have thought a two-bit break-in at the Watergate hotel, subsequently covered up by the President of the U.S., worthy of attention. But then, that’s a rabbit hole my screenplay has little time to explore.

Not so long ago, most all Americans agreed it was the media’s job to inform the public of what was happening in the country and around the world and leave the commentary to editorial pages.

No longer in my screenplay. My media outlets have no interest in the news if it doesn’t advance their biased political agendas. In my screenplay the overwhelming majority of Americans no longer trust what they hear from the media.  In fact, the Pew Research Center takes a poll that shows 66% of Americans say news stories are often inaccurate, 77% say news groups tend to favor one side or another, and 80% say news reports are often influenced by powerful people and organizations.

In my screenplay there are many issues important to the voters, but their favored candidate refuses to answer questions about those issues stating people will have to wait till AFTER the election. In response, the media sits around sucking their thumbs and ignoring his arrogance, hubris, and utter lack of transparency. It wasn’t so long ago the media would no more tolerate that kind of hubris from a presidential candidate than would voters. In my screenplay though, reporters subsume facts to narrative and agenda.

The issues my screenplay explores are not insignificant. They have to do with whether the judiciary becomes an extension of a far left political party, they determine whether we will keep the freedom of speech or, instead, will we be vulnerable to some Soviet-like snitch ratting us out for an extra meat ration; and whether our two party system will be competitive or become a one party system.

My screenplay takes place in a country barely 250 year old, barely in first grade as the age of countries goes. That country has had it’s share of trials, problems and flaws; but it has also made an outsized contribution to the well being, prosperity, and freedom of nearly every other country in the world. It’s one of the first countries to step up and help out in the event of catastrophe, threat, or war.

But in my screenplay, the media — and their political pets – would rather allege racism, violence, and greed no matter how freely the country shares it’s blessings with others around the world. To quote one of their political pets, how “we cling to our guns and our religion,” and to quote another, roughly half of us are nothing more than “a basket of DEPLORABLES.”

In my screenplay, the media trumpet the impending doom of climate change. But knowledgeable scientists report that the climate has been changing since the beginning of time. How many ice ages, how many warming trends, has the earth experienced?  How many times have storms strengthened and how many deep droughts? So many that hurricanes this year haven’t even set a new 100 year record. The climate changes. But the media wants us to believe the end is near, it’s our fault, and we must act to reverse it … and we must start by electing their favored political poodles. HOGWASH! But forgive me lest I get emotional. After all, it’s only a screenplay.

The left in my screenplay has devised a plan supported by the popular media that will rescue us all from climate catastrophe just in time. All we have to do is pay them $70 trillion – most of which has nothing to do with climate mitigation.

In fact, most of their plan calls for the reallocation of wealth. The few give the most, if not all of their money, to a government run by our betters who then reallocate that money to those who agree with them.

Their plan rations meat and tells us what we can eat and how much. It makes our cars obsolete by the mid 2030’s, but with no clear plan that gets us into whatever they want us to drive, nor any indication what the government will do with the millions of outlawed cars on the road today.

Their plan also tells us where we can live and what our houses will be like. Those who don’t agree can expect an assignment to ghetto housing with multiple families crammed into a 2 room apartment. Those in agreement will get something better – maybe the house you currently live in.

The same will be true of health care. Disagree with those in charge and good luck seeing a competent doctor or getting access to the medicine you need. If, on the other hand, you’re on their side, expect your health care to be provided free of charge.

Of course, it’s just a screenplay. The chance any of it could possibly happen  depends on a totally biased news media taking the side of the leftists on television, print, and the internet. Think that could ever happen?

The bright spot is that in my screenplay, the left fails because the incumbent president surprisingly wins an overwhelming re-election and spends his 2nd four years beating back the corrupt, arrogant, and incompetent career politicians who only care about taking and keeping political control.

In my screenplay, Americans keep their freedom, the corrupt politicians who hate and work against those freedoms, do not.