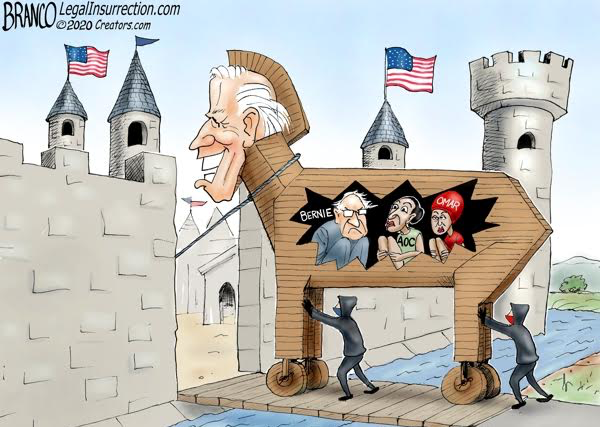 It’s been about 4 months since the rioting, looting and assaults started; and it’s about 2 months till election day. So what have we learned?

Here’s something. Joe Biden has proposed you give the government a bigger cut of the proceeds when you sell your home.  It’s a brand new tax and it’s part of his plan to take another $4 trillion out of our economy, just when the Chinese Virus has brought it to the edge of collapse.

Joe Biden didn’t attend his own Democrat nomination in Milwaukee. He said, “It’s because of the virus.” I’m guessing, that’s a run-up practice test for his not attending debates. When asked in a TV interview if he’d been tested for cognitive ability, he blew his stack and gave us another trademark, “COME ON MAN.” Then he asked the reporter if he’d been tested for cocaine. Word salad followed.

Joe brags a lot about his 50 years in public office, but listen carefully and you’ll notice a substantial omission. He makes no mention of any accomplishments. That’s because there aren’t any.

Joe says, “You all know me, you know Joe,” but the truth is most people don’t. Polls show people have no idea what Joe believes, what he’s accomplished in 47 years of public service, or even where he’s from. Most people who support him say they’re doing so either because he’s not Trump, or they like his smile.

But even if people knew where Joe stood on issues over the past half century, it wouldn’t matter, because he’s changed so radically. I suppose hanging out with his pseudo-socialist boss, Barack Obama, changed his views on the issues, and his vision of what he thinks America should be.

In the past few months, Joe’s platform has morphed into the Bernie and AOC platform. In addition to his $4 trillion tax increase, he’s proposed a Green New Deal, gun confiscation, public funding for abortion right up to the point of birth, give China whatever they want, same with the UN, reinstate the treaty with Iran (maybe with another cash give-away?) And reinstate the Paris Climate Accords.

With Joe’s blessings, 17 large American cities (all run by lefty Democrats) are working on plans to defund or eliminate their police departments. They want to cut staff, get rid of cops on school campuses, and sell off equipment. I think it is very important to remember this entire movement started because of the death of George Floyd. With the leak of the complete video of Mr Floyd’s arrest, we now have a much more accurate picture of what happened. The video shows that long before a knee was placed on his neck, Floyd complained he wasn’t able to breathe. Subsequent toxicology reports show he had a level of Fentanyl which may have caused severe breathing issues.

Doesn’t change what looks like reckless conduct by the police involved, but Fentanyl may have a been an additional factor.

It’s also important to consider the number of lives lost during the fall out after Floyd’s murder – at least 33 people have been killed in the riots so far – the overwhelming majority by “peaceful” protesters. A beloved owner of a Louisville barbecue restaurant. A former star football player. A federal officer working security.  The list goes on and on. Included are a large number of young children who were caught in the crossfire between protesters, rioters, looters, or gang members.

I obviously didn’t know Mr. Floyd, but it’s hard to believe any of this is what he would have wanted. It’s impossible to see how cutting police budgets or the hit to our economy that Biden’s tax increases will cause helps those in Mr. Floyd’s neighborhood – or, for that matter, any other neighborhood in America.

Francis Buk: Mr. Farrakhan, With One Word You Can Free Black Slaves